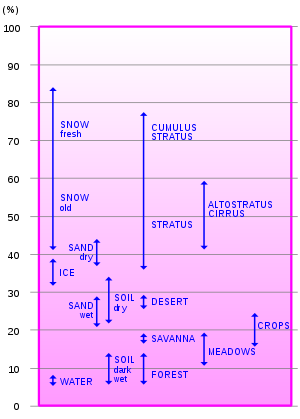 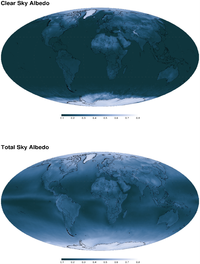 Albedo can effect the electrical energy output of solar photovoltaic devices (PV). For example, the effects of a spectrally responsive albedo are illustrated by the differences between the spectrally weighted albedo of solar PV technology based on hydrogenated amorphous silicon (a-Si:H) and crystalline silicon (c-Si)-based compared to traditional spectral-integrated albedo predictions. Research showed impacts of over 10%.[22] More recently, the analysis was extended to the effects of spectral bias due to the specular reflectivity of 22 commonly occurring surface materials (both human-made and natural) and analyzes the albedo effects on the performance of seven PV materials covering three common PV system topologies: industrial (solar farms), commercial flat rooftops and residential pitched-roof applications.[23]

Because forests are generally attributed a low albedo, (as the majority of the ultraviolet and visible spectrum is absorbed through photosynthesis), it has been erroneously assumed that removing forests would lead to cooling on the grounds of increased albedo. Through the evapotranspiration of water, trees discharge excess heat from the forest canopy. This water vapour rises resulting in cloud cover which also has a high albedo, thereby further increasing the net global cooling effect attributable to forests.{{ safesubst:#invoke:Unsubst||date=__DATE__ |$B= {{#invoke:Category handler|main}}{{#invoke:Category handler|main}}[citation needed] }}

Studies by the Hadley Centre have investigated the relative (generally warming) effect of albedo change and (cooling) effect of carbon sequestration on planting forests. They found that new forests in tropical and midlatitude areas tended to cool; new forests in high latitudes (e.g. Siberia) were neutral or perhaps warming.[24]

Snow albedos can be as high as 0.9; this, however, is for the ideal example: fresh deep snow over a featureless landscape. Over Antarctica they average a little more than 0.8. If a marginally snow-covered area warms, snow tends to melt, lowering the albedo, and hence leading to more snowmelt (the ice-albedo positive feedback). Cryoconite, powdery windblown dust containing soot, sometimes reduces albedo on glaciers and ice sheets.[25]

At the scale of the wavelength of light even wavy water is always smooth so the light is reflected in a locally specular manner (not diffusely). The glint of light off water is a commonplace effect of this. At small angles of incident light, waviness results in reduced reflectivity because of the steepness of the reflectivity-vs.-incident-angle curve and a locally increased average incident angle.[26]

Cloud albedo has substantial influence over atmospheric temperatures. Different types of clouds exhibit different reflectivity, theoretically ranging in albedo from a minimum of near 0 to a maximum approaching 0.8. "On any given day, about half of Earth is covered by clouds, which reflect more sunlight than land and water. Clouds keep Earth cool by reflecting sunlight, but they can also serve as blankets to trap warmth."[27]

Albedo and climate in some areas are affected by artificial clouds, such as those created by the contrails of heavy commercial airliner traffic.[28] A study following the burning of the Kuwaiti oil fields during Iraqi occupation showed that temperatures under the burning oil fires were as much as 10 °C colder than temperatures several miles away under clear skies.[29]

Aerosols (very fine particles/droplets in the atmosphere) have both direct and indirect effects on the Earth’s radiative balance. The direct (albedo) effect is generally to cool the planet; the indirect effect (the particles act as cloud condensation nuclei and thereby change cloud properties) is less certain.[30] As per [31] the effects are:

Another albedo-related effect on the climate is from black carbon particles. The size of this effect is difficult to quantify: the Intergovernmental Panel on Climate Change estimates that the global mean radiative forcing for black carbon aerosols from fossil fuels is +0.2 W m−2, with a range +0.1 to +0.4 W m−2.[32] Black carbon is a bigger cause of the melting of the polar ice cap in the Arctic than carbon dioxide due to its effect on the albedo.[33]