In statistical quality control, the CUSUM (or cumulative sum control chart) is a sequential analysis technique developed by E. S. Page of the University of Cambridge. It is typically used for monitoring change detection.[1] CUSUM was announced in Biometrika, in 1954, a few years after the publication of Wald's SPRT algorithm.[2]

Page referred to a "quality number"

, by which he meant a parameter of the probability distribution; for example, the mean. He devised CUSUM as a method to determine changes in it, and proposed a criterion for deciding when to take corrective action. When the CUSUM method is applied to changes in mean, it can be used for step detection of a time series.

A few years later, George Alfred Barnard developed a visualization method, the V-mask chart, to detect both increases and decreases in

As its name implies, CUSUM involves the calculation of a cumulative sum (which is what makes it "sequential"). Samples from a process

, and summed as follows:

Page did not explicitly say that

represents the likelihood function, but this is common usage.

As a means of assessing CUSUM's performance, Page defined the average run length (A.R.L.) metric; "the expected number of articles sampled before action is taken." He further wrote:[2]

When the quality of the output is satisfactory the A.R.L. is a measure of the expense incurred by the scheme when it gives false alarms, i.e., Type I errors (Neyman & Pearson, 1936[4]). On the other hand, for constant poor quality the A.R.L. measures the delay and thus the amount of scrap produced before the rectifying action is taken, i.e., Type II errors.

The following example shows 15 observations of a process with a mean value of X equal to 0 and a standard deviation of 0.5. It can be seen as the value of Z is never greater than 3, so other control charts should not be detected as a failure while using the Cusum 17 that shows the value of SH is greater than 4. 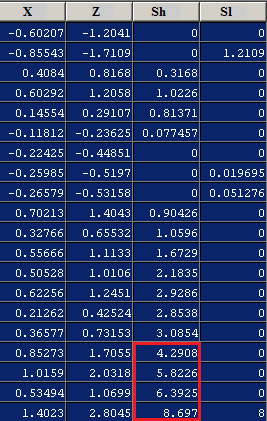