{{ safesubst:#invoke:Unsubst||$N=Unreferenced |date=__DATE__ |$B= {{#invoke:Message box|ambox}} }} {{#invoke:Hatnote|hatnote}} In mathematics, a positively oriented curve is a planar simple closed curve (that is, a curve in the plane whose starting point is also the end point and which has no other self-intersections) such that when traveling on it one always has the curve interior to the left (and consequently, the curve exterior to the right). If in the above definition one interchanges left and right, one obtains a negatively oriented curve.

Crucial to this definition is the fact that every simple closed curve admits a well-defined interior; that follows from the Jordan curve theorem.

Orientation of a simple polygon 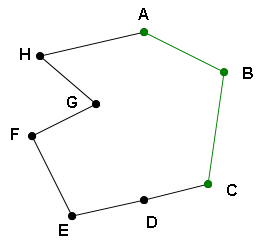 A formula for its determinant may be obtained, e.g., using the method of cofactor expansion:

In practical applications, the following considerations are commonly taken into an account.

If the orientation of a convex polygon is sought, then, of course, any vertex may be picked.

For numerical reasons, the following equivalent formula for the determinant is commonly used:

The latter formula has 4 multiplications less. What is more important in computer computations involved in most practical applications, such as computer graphics or CAD, the absolute values of the multipliers are usually smaller (e.g., when A, B, C are within the same quadrant), thus giving a smaller numerical error or, in the extreme cases, avoiding the arithmetic overflow.

When it is not known in advance that the sequence of points defines a simple polygon, the following things must be kept in mind.

For a self-intersecting polygon (complex polygon) (or for any self-intersecting curve) there is no natural notion of the "interior", hence the orientation is not defined. At the same time, in geometry and computer graphics there are a number of concepts to replace the notion of the "interior" for closed non-simple curves; see, e.g., "flood fill" and "winding number".

In "mild" cases of self-intersection (degenerate polygons), when three consecutive points are allowed be on the same straight line and form a zero-degree angle, the concept of "interior" still makes sense, but an extra care must be taken in selection of the tested angle. In the given example, imagine point A to lie on segment BC. In this situation the angle ABC and its determinant will be 0, hence useless. A solution is to test consecutive corners along the polygon (BCD, DEF,...) until a non-sero determinant is found (unless all points lie on the same straight line). (Notice that the points C, D, E are on the same line and form a 180-degree angle with zero determinant.)

Once the orientation of a polygon formed from an ordered set of vertices is known, the concavity of a local region of the polygon can be determined using a second orientation matrix. This matrix is composed of three consecutive vertices which are being examined for concavity. For example, in the polygon pictured above, if we wanted to know whether the sequence of points F-G-H is concave, convex, or collinear (flat), we construct the matrix

The following table illustrates rules for determining whether a sequence of points is convex, concave, or flat: