Thread breakup occurs where two fluids or a fluid in a vacuum form a free surface with surface energy. If more surface area is present than the minimum required to contain the volume of fluid, the system has an excess of surface energy. A system not at the minimum energy state will attempt to rearrange so as to move toward the lower energy state, leading to the breakup of the fluid into smaller masses to minimize the system surface energy by reducing the surface area. The exact outcome of the thread breakup process is dependent on the surface tension, viscosity, density, and diameter of the thread undergoing breakup.

The examination of droplet formation has a long history, first traceable to the work of Leonardo da Vinci who wrote:[1]

How water has tenacity in itself and cohesion between its particles. This is seen in the process of a drop becoming detached from the remainder, this remainder being stretched out as far as it can through the weight of the drop which is extending it; and after the drop has been severed from this mass the mass returns upwards with a movement contrary to the nature of heavy things.

He thus correctly attributed the fall of droplets to gravity, but misinterpreted the mechanism which drives thread breakup.

The first correct analysis of fluid thread breakup was determined qualitatively by Young and mathematically by Laplace between 1804 and 1805. [2] [3] They correctly attributed the driver of thread breakup to surface tension properties. Moreover, they also deduced the importance of mean curvature in the creation of excess pressure in the fluid thread. Through their analysis, they showed that surface tension can behave in two ways: an elastic mechanism that can support a hanging droplet and a pressure mechanism due to capillary pressure that promotes thread breakup.

Savart followed in 1833 with experimental work, utilizing the stroboscopic technique to quantitatively measure thread breakup. [4] He noted that breakup is a spontaneous process, occurring without an external stimuli. This work allowed him to determine that droplets are produced from a jet flowing from a tank at a distinct rate inversely proportional to the nozzle radius and proportional to pressure in the tank. These observations facilitated Plateau's work that established the relationship between jet breakup and surface energy. [5] Plateau was able to determine the most unstable disturbance wavelength on the fluid thread, which was later revised by Rayleigh to account for jet dynamics.

As the surface disturbance becomes large, non-linear theory must be applied. The behavior of jets with large disturbances was examined experimentally by Magnus and Lenard. [6] [7] Their experiments helped to characterize satellite droplets, droplets that are produced in addition to the large main droplet, through the introduction of high speed photography. High speed photography is now the standard method for experimentally analyzing thread breakup.

With the advent of greater computational power, numerical simulations have begun to replace experimental efforts as the chief means of understanding fluid breakup. However, difficulty remains in accurately tracking the free surface of many liquids due to its complex behavior. The most success has occurred with fluids of low and high viscosity where the boundary integral method can be employed as the Green's function for both cases is known. Dommermuth and Yue characterized irrotational, inviscid flow by this method as did Schulkes. [8] [9] Youngren and Acrivos considered the behavior of a bubble in a high viscosity liquid. [10] Stone and Leal expanded this initial work to consider the dynamics of individual drops. [11] For fluids of middling viscosity, full simulations using the Navier-Stokes equations are required with methods determining the free surface such as level-set and volume of fluid. The earliest work with full Navier-Stokes simulations was done by Fromm which focused on inkjet technology. [12] Such simulations remain an active area of research.

The process undergone by a fluid thread or jet undergoing breakup from a larger mass to a smaller mass.

The breakup process in a fluid thread or jet begins with the development of small perturbations on the free surface of the fluid. This is known as the linear theory of fluid thread breakup. These perturbations are always present and can be generated by numerous sources including vibrations of the fluid container or non-uniformity in the shear stress on the free surface. In general, these disturbances take an arbitrary form and are thus difficult to consider rigorously. It is therefore helpful to take a Fourier transform of the disturbances to decompose the arbitrary disturbances into perturbations of various single wavelengths on the surface of the thread. In doing so, this allows one to determine which wavelengths of the disturbance will grow and which will decay in time.[13]

While linear theory is useful in considering the growth of small disturbances on the free surface, when the disturbances grow to have a significant amplitude, non-linear effects begin to dominate breakup behavior. The non-linear behavior of the thread governs its final breakup and ultimately determines the final shape and number of the resulting fluid masses.

Nonlinearity is captured through the use of self-similarity. Self-similarity assumes that the behavior of the fluid thread as the radius approaches zero is the same as the behavior of the fluid thread when it has some finite radius. Detailed understanding of non-linear thread behavior requires the use of asymptotic expansions to generate the appropriate scaling behavior. Numerous solutions have been found for the non-linear behavior of fluid threads based on the forces that are relevant in particular circumstances. [14] [15] [16]

How a fluid thread or jet undergoes breakup is governed by several parameters among which are the Reynolds number, the Weber number, Ohnesorge number, and the disturbance wavelength. While these numbers are common in fluid mechanics, the parameters selected as scales must be appropriate to thread breakup. The length scale most often selected is the radius of the fluid thread, while the velocity is most often taken to be the velocity of the bulk fluid motion. However, these scales can change based on the characteristics of the considered problem.

The Ohnesorge number is the ratio between viscous and surface tension effects within the thread. As it eliminates the effects of inertia and the need for a velocity scale, it is oftentimes more convenient to express scaling relationships in terms of the Ohnesorge number rather than the Reynolds and Weber number individually.

Plateau considered the stability of a thread of fluid when only inertial and surface tension effects were present. By decomposing an arbitrary disturbance on the free surface into its constitutive harmonics/wavelengths, he was able to derive the a condition for the stability of the jet in terms of the perturbation:

where ω is the growth rate of the perturbation, σ is the surface tension of the fluids, k is the wavenumber of perturbation, ρ is the fluid density, a is the initial radius of the unperturbed fluid, and I is the modified Bessel function of the first kind. By computing the growth rate as a function of wavenumber, one can determine that the fastest growing disturbance wavelength occurs at:

The wavelength of maximum instability increases as the radius of the fluid thread increases. As importantly, unstable modes are only possible when:

Plotting this, one finds that the longest wavelengths are the most unstable. As importantly, one can note that the viscosity of the fluid thread does not influence which wavelengths will be stable. Viscosity only acts to decrease how rapidly a given perturbation will grow or decay with time.

Examples of when this case would apply are when almost any liquid undergoes thread/jet breakup in an air environment.

For the limiting case where the external environment of the fluid thread is much more viscous than the thread itself, the viscosity of the fluid thread falls from the perturbation growth rate completely. The growth rate thus becomes only a function of the initial radius of the thread, the perturbation wavelength, the surface tension of the thread, the viscosity of the external environment, and the second order Bessel functions of the second kind.

Examples of when this case would apply are when gas bubbles enter a liquid or when honey falls into water.

The general case for two viscous fluids is much more difficult to solve directly. Tomotika expressed his solution as:

coefficients are most easily expressed as the determinants of the following matrices:

The resulting solution remains a function of both the thread and external environment viscosities as well as the perturbation wavelength. The most unstable combination of viscosities and perturbation occurs when

Water flows from a faucet, producing both a single large droplet and several satellite droplets.

Satellite drops, also known as secondary droplets, are the drops produced during the thread breakup process in addition to the large main droplet. The drops result when the filament by which the main droplet in hanging from the larger fluid mass itself breaks off from the fluid mass. The fluid contained in the filament can stay as a single mass or breakup due to the recoil disturbances imposed on it by the separation of the main droplet. While the production of satellite droplets can be predicted based on fluid properties, their precise location and volume cannot be predicted.[20] [21]

In general, secondary droplets are an unwanted phenomenon, especially in applications where precise deposition of droplets in important. The production of satellite droplets is governed by the non-linear dynamics of the problem near the final stages of thread breakup. 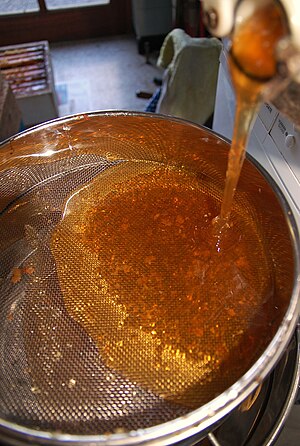 The viscosity of honey is large enough to damp all surface perturbations that would lead to the breakup of the thread into droplets.

Numerous examples of the breakup of fluid threads exist in daily life. It is one of the most common fluid mechanics phenomena one experiences and as such most give the process little thought.

Flow from a faucet

Dripping water is an everyday occurrence. As water leaves the faucet, the filament attached to the faucet begins to neck down, eventually to the point that the main droplet detaches from the surface. The filament cannot retract sufficiently rapidly to the faucet to prevent breakup and thus disintegrates into several small satellite drops.

Air bubbles are another common breakup phenomena. As air enters a tank of liquid, like a fish tank, the thread again necks at the base to produce a bubble. Blowing bubbles from a straw into a glass behaves in much the same manner.

The pitch drop experiment is a famous fluid breakup experiment using high viscous tar pitch. The rate of breakup is slowed to such a degree that only 11 drops have fallen since 1927.

Honey is sufficiently viscous that the surface perturbation that lead to breakup are almost fully damped from honey threads. This results in the production of long filaments of honey rather than individual droplets.