In Riemannian geometry, Gauss's lemma asserts that any sufficiently small sphere centered at a point in a Riemannian manifold is perpendicular to every geodesic through the point. More formally, let M be a Riemannian manifold, equipped with its Levi-Civita connection, and p a point of M. The exponential map is a mapping from the tangent space at p to M:

which is a diffeomorphism in a neighborhood of zero. Gauss' lemma asserts that the image of a sphere of sufficiently small radius in TpM under the exponential map is perpendicular to all geodesics originating at p. The lemma allows the exponential map to be understood as a radial isometry, and is of fundamental importance in the study of geodesic convexity and normal coordinates.

We define the exponential map at

is the unique geodesic with

is chosen small enough so that for every

is complete, then, by the Hopf–Rinow theorem,

is defined on the whole tangent space.

be a curve differentiable in

, it is clear that we can choose

. In this case, by the definition of the differential of the exponential in

So (with the right identification

is the identity. By the implicit function theorem,

is a diffeomorphism on a neighborhood of

. The Gauss Lemma now tells that

is also a radial isometry.

The exponential map is a radial isometry

. In what follows, we make the identification

, this lemma means that

is a radial isometry in the following sense: let

is well defined. And let

remains an isometry in

, and, more generally, all along the geodesic

is well defined)! Then, radially, in all the directions permitted by the domain of definition of

, it remains an isometry. 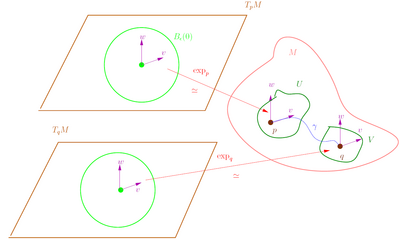 The exponential map as a radial isometry

We proceed in three steps:

. We find that, thanks to the identification we have made, and since we are only taking equivalence classes of curves, it is possible to choose

(these are exactly the same curves, but shifted because of the domain of definition

; however, the identification allows us to gather them around

. In particular, we put

We must therefore show that the second term is null, because, according to Gauss's Lemma, we must have:

The curve chosen to prove lemma

Let us define the curve

, and therefore that, for example:

because, according to what has been given above:

being given that the differential is a linear map. This will therefore prove the lemma.

are geodesics, the function