{{ safesubst:#invoke:Unsubst||$N=Merge from |date=__DATE__ |$B= Template:MboxTemplate:DMCTemplate:Merge partner }} In algorithmic information theory (a subfield of computer science), the Kolmogorov complexity of an object, such as a piece of text, is a measure of the computational resources needed to specify the object. It is named after the Andrey Kolmogorov who first published on the subject in 1963.[1][2]

For example, consider the following two strings of length 64, each containing only lowercase letters and digits:

The first string has a short English-language description, namely "ab 32 times", which consists of 11 characters. The second one has no obvious simple description (using the same character set) other than writing down the string itself, which has 64 characters. 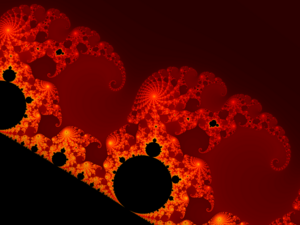 The notion of the Kolmogorov complexity can be used to state and prove impossibility results akin to Gödel's incompleteness theorem and Turing's halting problem.

We could, alternatively, choose an encoding for Turing machines, where an encoding is a function which associates to each Turing Machine M a bitstring <M>. If M is a Turing Machine which, on input w, outputs string x, then the concatenated string <M> w is a description of x. For theoretical analysis, this approach is more suited for constructing detailed formal proofs and is generally preferred in the research literature. Binary lambda calculus may provide the simplest definition of complexity yet. In this article, an informal approach is discussed.

Any string s has at least one description, namely the program:

Proof: By symmetry, it suffices to prove that there is some constant c such that for all bitstrings s

Now, suppose there is a program in the language L1 which acts as an interpreter for L2:

where p is a program in L2. The interpreter is characterized by the following property:

This proves the desired upper bound.

Algorithmic information theory is the area of computer science that studies Kolmogorov complexity and other complexity measures on strings (or other data structures).

The concept and theory of Kolmogorov Complexity is based on a crucial theorem first discovered by Ray Solomonoff, who published it in 1960, describing it in "A Preliminary Report on a General Theory of Inductive Inference"[3] as part of his invention of algorithmic probability. He gave a more complete description in his 1964 publications, "A Formal Theory of Inductive Inference," Part 1 and Part 2 in Information and Control.[4][5]

The theorem says that, among algorithms that decode strings from their descriptions (codes), there exists an optimal one. This algorithm, for all strings, allows codes as short as allowed by any other algorithm up to an additive constant that depends on the algorithms, but not on the strings themselves. Solomonoff used this algorithm, and the code lengths it allows, to define a "universal probability" of a string on which inductive inference of the subsequent digits of the string can be based. Kolmogorov used this theorem to define several functions of strings, including complexity, randomness, and information.

When Kolmogorov became aware of Solomonoff's work, he acknowledged Solomonoff's priority.[8] For several years, Solomonoff's work was better known in the Soviet Union than in the Western World. The general consensus in the scientific community, however, was to associate this type of complexity with Kolmogorov, who was concerned with randomness of a sequence, while Algorithmic Probability became associated with Solomonoff, who focused on prediction using his invention of the universal a priori probability distribution.

There are several other variants of Kolmogorov complexity or algorithmic information. The most widely used one is based on self-delimiting programs, and is mainly due to Leonid Levin (1974).

An axiomatic approach to Kolmogorov complexity based on Blum axioms (Blum 1967) was introduced by Mark Burgin in the paper presented for publication by Andrey Kolmogorov (Burgin 1982).

Some consider that naming the concept "Kolmogorov complexity" is an example of the Matthew effect.[9]

In the following discussion, let K(s) be the complexity of the string s.

It is not hard to see that the minimal description of a string cannot be too much larger than the string itself - the program GenerateFixedString above that outputs s is a fixed amount larger than s.

Theorem: There is a constant c such that

The first result is that there is no way to compute K.

Theorem: K is not a computable function.

In other words, there is no program which takes a string s as input and produces the integer K(s) as output. We show this by contradiction by making a program that creates a string that should only be able to be created by a longer program. Suppose there is a program

that takes as input a string s and returns K(s). Now, consider the program

This program calls KolmogorovComplexity as a subroutine. The program tries every string, starting with the shortest, until it finds a string with complexity at least n, then returns that string. Therefore, given any positive integer n, it produces a string with Kolmogorov complexity at least as great as n. The program itself has a fixed length U. The input to the program GenerateComplexString is an integer n. Here, the size of n is measured by the number of bits required to represent n, which is log2(n). Now, consider the following program:

This program calls GenerateComplexString as a subroutine, and also has a free parameter n0. The program outputs a string s whose complexity is at least n0. By an auspicious choice of the parameter n0, we will arrive at a contradiction. To choose this value, note that s is described by the program

GenerateParadoxicalString whose length is at most

where C is the "overhead" added by the program GenerateParadoxicalString. Since n grows faster than log2(n), there must exist a value n0 such that

But this contradicts the definition of s as having a complexity at least n0. That is, by the definition of K(s), the string s returned by GenerateParadoxicalString is only supposed to be able to be generated by a program of length n0 or longer, but GenerateParadoxicalString is shorter than n0. Thus the program named "KolmogorovComplexity" cannot actually computably find the complexity of arbitrary strings.

This is proof by contradiction, where the contradiction is similar to the Berry paradox: "Let n be the smallest positive integer that cannot be defined in fewer than twenty English words". It is also possible to show the non-computability of K by reduction from the non-computability of the halting problem H, since K and H are Turing-equivalent.[2]

In the programming language community there is a corollary known as the full employment theorem, stating that there is no perfect size-optimizing compiler.

{{#invoke:main|main}} The chain rule for Kolmogorov complexity states that

It is straightforward to compute upper bounds for

with some method, implement the corresponding decompressor in the chosen language, concatenate the decompressor to the compressed string, and measure the length of the resulting string.

. This is equivalent to saying that

For the same reason, most strings are complex in the sense that they cannot be significantly compressed -

is not much smaller than

, the length of s in bits. To make this precise, fix a value of n. There are

bitstrings of length n. The uniform probability distribution on the space of these bitstrings assigns exactly equal weight

to each string of length n.

Theorem: With the uniform probability distribution on the space of bitstrings of length n, the probability that a string is incompressible by c is at least

To prove the theorem, note that the number of descriptions of length not exceeding

is given by the geometric series:

There remain at least

bitstrings of length n that are incompressible by c. To determine the probability, divide by

We know that, in the set of all possible strings, most strings are complex in the sense that they cannot be described in any significantly "compressed" way. However, it turns out that the fact that a specific string is complex cannot be formally proved, if the complexity of the string is above a certain threshold. The precise formalization is as follows. First, fix a particular axiomatic system S for the natural numbers. The axiomatic system has to be powerful enough so that, to certain assertions A about complexity of strings, one can associate a formula FA in S. This association must have the following property:

if FA is provable from the axioms of S, then the corresponding assertion A must be true. This "formalization" can be achieved, either by an artificial encoding such as a Gödel numbering, or by a formalization which more clearly respects the intended interpretation of S.

Theorem: There exists a constant L (which only depends on the particular axiomatic system and the choice of description language) such that there does not exist a string s for which the statement

(as formalized in S) can be proven within the axiomatic system S.

Note that, by the abundance of nearly incompressible strings, the vast majority of those statements must be true.

The proof of this result is modeled on a self-referential construction used in Berry's paradox. The proof is by contradiction. If the theorem were false, then

Assumption (X): For any integer n there exists a string s for which there is a proof in S of the formula "K(s) ≥ n" (which we assume can be formalized in S).

which determines whether the nth proof actually proves a complexity formula K(s) ≥ L. The strings s, and the integer L in turn, are computable by programs:

Given an n, this program tries every proof until it finds a string and a proof in the formal system S of the formula K(s) ≥ L for some L ≥ n. The program terminates by our Assumption (X). Now, this program has a length U. There is an integer n0 such that U + log2(n0) + C < n0, where C is the overhead cost of

The program GenerateProvablyParadoxicalString outputs a string s for which there exists an L such that K(s) ≥ L can be formally proved in S with L ≥ n0. In particular, K(s) ≥ n0 is true. However, s is also described by a program of length U + log2(n0) + C, so its complexity is less than n0. This contradiction proves Assumption (X) cannot hold.

Similar ideas are used to prove the properties of Chaitin's constant.

The minimum message length principle of statistical and inductive inference and machine learning was developed by C.S. Wallace and D.M. Boulton in 1968. MML is Bayesian (i.e. it incorporates prior beliefs) and information-theoretic. It has the desirable properties of statistical invariance (i.e. the inference transforms with a re-parametrisation, such as from polar coordinates to Cartesian coordinates), statistical consistency (i.e. even for very hard problems, MML will converge to any underlying model) and efficiency (i.e. the MML model will converge to any true underlying model about as quickly as is possible). C.S. Wallace and D.L. Dowe (1999) showed a formal connection between MML and algorithmic information theory (or Kolmogorov complexity).

Kolmogorov randomness - also called algorithmic randomness - defines a string (usually of bits) as being random if and only if it is shorter than any computer program that can produce that string. This definition of randomness is critically dependent on the definition of Kolmogorov complexity. To make this definition complete, a computer has to be specified (usually a Turing machine). According to the above definition of randomness, a random string is also an "incompressible" string in the sense that it is impossible to give a representation of the string using a program whose length is shorter than the length of the string itself. However, according to this definition, most strings shorter than a certain length end up being Chaitin-Kolmogorovically random because the best one can do with very small strings is to write a program that simply prints these strings.