Mason's gain formula (MGF) is a method for finding the transfer function of a linear signal-flow graph (SFG). The formula was derived by Samuel Jefferson Mason[1] and is named after its discoverer. MGF is an alternate method to finding the transfer function algebraically by labeling each signal, writing down the equation for how that signal depends on other signals, and then solving the multiple equations for the output signal in terms of the input signal. MGF provides a step by step method to obtain the transfer function from a SFG. Often, MGF can be determined by inspection of the SFG. The method can easily handle SFGs with many variables and loops including loops with inner loops. MGF comes up often in the context of control systems and digital filters because control systems and digital filters are often represented by SFGs.

The gain formula is as follows:

To use this technique, 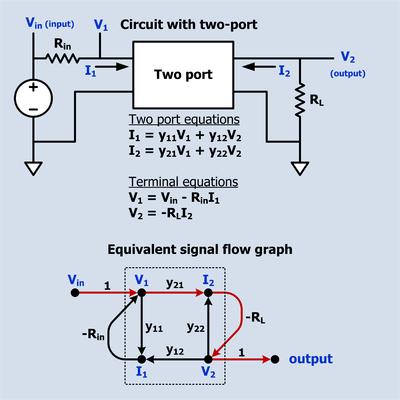 Signal flow graph of a circuit containing a two port. The forward path from input to output is shown in a different color.

The transfer function from Vin to V2 is desired.

There is only one forward path:

There are three loops:

note: L1 and L2 do not touch each other whereas L3 touches both of the other loops.

note: the forward path touches all the loops so all that is left is 1. 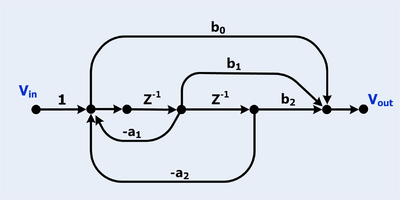 There are two loops

Note, the two loops touch so there is no term for their product.

There are three forward paths

All the forward paths touch all the loops so 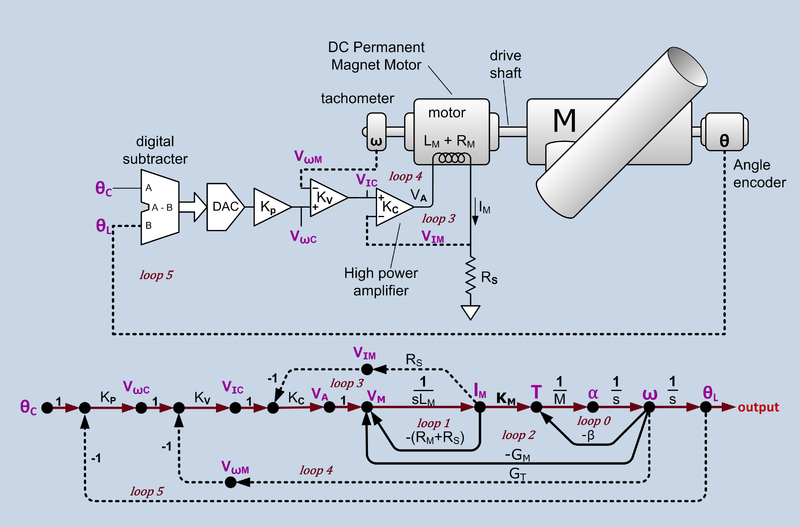 The signal flow graph has six loops. They are:

There is one forward path:

The forward path touches all the loops therefore the co-factor

And the gain from input to output is

Mason's rule can be stated in a simple matrix form. Assume

is the transient matrix of the graph where

is the identity matrix.

Mason's Rule can grow factorially, because the enumeration of paths in a directed graph grows thusly. To see this consider the complete directed graph on

vertices, having an edge between every pair of vertices. There is a path form

for each of the

permutations of the intermediate vertices. Thus Gaussian elimination is more efficient in the general case.

Yet Mason's rule characterizes the transfer functions of interconnected systems in a way which is simultaneously algebraic and combinatorial, allowing for general statements and other computations in algebraic systems theory. While numerous inverses occur during Gaussian eliminiation, Mason's rule naturally collects these into a single quasi-inverse. General form is

Where as described above,

is a sum of cycle products, each of which typically falls into an ideal (for example, the strictly causal operators). Fractions of this form form a subring

of the rational function field. This observation carries over to the noncommutative case,[2] even though Mason's rule itself must then be replaced by Riegle's rule.