When working exclusively in two-dimensional Euclidean space, the definite article is used, so, the plane refers to the whole space. Many fundamental tasks in mathematics, geometry, trigonometry, graph theory and graphing are performed in a two-dimensional space, or in other words, in the plane.

Euclid set forth the first great landmark of mathematical thought, an axiomatic treatment of geometry.[1] He selected a small core of undefined terms (called common notions) and postulates (or axioms) which he then used to prove various geometrical statements. Although the plane in its modern sense is not directly given a definition anywhere in the Elements, it may be thought of as part of the common notions.[2] In his work Euclid never makes use of numbers to measure length, angle, or area. In this way the Euclidean plane is not quite the same as the Cartesian plane.

This section is solely concerned with planes embedded in three dimensions: specifically, in R3.

The following statements hold in three-dimensional Euclidean space but not in higher dimensions, though they have higher-dimensional analogues:

be the position vector of some point

be a nonzero vector. The plane determined by this point and vector consists of those points

, such that the vector drawn from

. Recalling that two vectors are perpendicular if and only if their dot product is zero, it follows that the desired plane can be described as the set of all points

(The dot here means a dot product, not scalar multiplication.) Expanded this becomes

which is the point-normal form of the equation of a plane.[3] This is just a linear equation:

Conversely, it is easily shown that if a, b, c and d are constants and a, b, and c are not all zero, then the graph of the equation

is a plane having the vector

as a normal.[4] This familiar equation for a plane is called the general form of the equation of the plane.[5]

Thus for example a regression equation of the form y = d + ax + cz (with b=-1) establishes a best-fit plane in three-dimensional space when there are two explanatory variables.

Alternatively, a plane may be described parametrically as the set of all points of the form 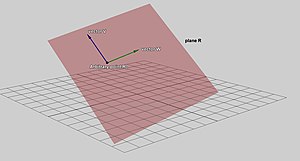 Vector description of a plane

where s and t range over all real numbers, v and w are given linearly independent vectors defining the plane, and r0 is the vector representing the position of an arbitrary (but fixed) point on the plane. The vectors v and w can be visualized as vectors starting at r0 and pointing in different directions along the plane. Note that v and w can be perpendicular, but cannot be parallel.

Describing a plane through three points

The plane passing through p1, p2, and p3 can be described as the set of all points (x,y,z) that satisfy the following determinant equations:

To describe the plane by an equation of the form

, solve the following system of equations:

This system can be solved using Cramer's Rule and basic matrix manipulations. Let

If D is non-zero (so for planes not through the origin) the values for a, b and c can be calculated as follows:

These equations are parametric in d. Setting d equal to any non-zero number and substituting it into these equations will yield one solution set.

This plane can also be described by the "point and a normal vector" prescription above. A suitable normal vector is given by the cross product

Distance from a point to a plane

not necessarily lying on the plane, the shortest distance from

to the plane is

lies in the plane if and only if D=0.

meaning that a, b, and c are normalized[7] then the equation becomes

Another vector form for the equation of a plane, known as the Hesse normal form relies on the parameter D. This form is:[5]

is a unit normal vector to the plane,

The general formula for higher dimensions can be quickly arrived at using vector notation. Let the hyperplane have equation

is a normal vector and

is a position vector to a point in the hyperplane. We desire the perpendicular distance to the point

. The hyperplane may also be represented by the scalar equation

may be represented as

. We desire the scalar projection of the vector

in the direction of

satisfies the equation of the hyperplane) we have

Line of intersection between two planes

The line of intersection between two planes

are normalized is given by

This is found by noticing that the line must be perpendicular to both plane normals, and so parallel to their cross product

(this cross product is zero if and only if the planes are parallel, and are therefore non-intersecting or entirely coincident).

The remainder of the expression is arrived at by finding an arbitrary point on the line. To do so, consider that any point in space may be written as

is a basis. We wish to find a point which is on both planes (i.e. on their intersection), so insert this equation into each of the equations of the planes to get two simultaneous equations which can be solved for

If we further assume that

. If that is not the case, then a more complex procedure must be used.[8]

Given two intersecting planes described by

, the dihedral angle between them is defined to be the angle

between their normal directions:

Planes in various areas of mathematics

In addition to its familiar geometric structure, with isomorphisms that are isometries with respect to the usual inner product, the plane may be viewed at various other levels of abstraction. Each level of abstraction corresponds to a specific category.

The plane may also be viewed as an affine space, whose isomorphisms are combinations of translations and non-singular linear maps. From this viewpoint there are no distances, but collinearity and ratios of distances on any line are preserved.

In the opposite direction of abstraction, we may apply a compatible field structure to the geometric plane, giving rise to the complex plane and the major area of complex analysis. The complex field has only two isomorphisms that leave the real line fixed, the identity and conjugation.

In the same way as in the real case, the plane may also be viewed as the simplest, one-dimensional (over the complex numbers) complex manifold, sometimes called the complex line. However, this viewpoint contrasts sharply with the case of the plane as a 2-dimensional real manifold. The isomorphisms are all conformal bijections of the complex plane, but the only possibilities are maps that correspond to the composition of a multiplication by a complex number and a translation.

In addition, the Euclidean geometry (which has zero curvature everywhere) is not the only geometry that the plane may have. The plane may be given a spherical geometry by using the stereographic projection. This can be thought of as placing a sphere on the plane (just like a ball on the floor), removing the top point, and projecting the sphere onto the plane from this point). This is one of the projections that may be used in making a flat map of part of the Earth's surface. The resulting geometry has constant positive curvature.

Alternatively, the plane can also be given a metric which gives it constant negative curvature giving the hyperbolic plane. The latter possibility finds an application in the theory of special relativity in the simplified case where there are two spatial dimensions and one time dimension. (The hyperbolic plane is a timelike hypersurface in three-dimensional Minkowski space.)

The one-point compactification of the plane is homeomorphic to a sphere (see stereographic projection); the open disk is homeomorphic to a sphere with the "north pole" missing; adding that point completes the (compact) sphere. The result of this compactification is a manifold referred to as the Riemann sphere or the complex projective line. The projection from the Euclidean plane to a sphere without a point is a diffeomorphism and even a conformal map.

The plane itself is homeomorphic (and diffeomorphic) to an open disk. For the hyperbolic plane such diffeomorphism is conformal, but for the Euclidean plane it is not.