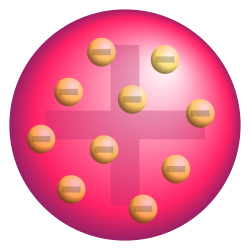 A schematic presentation of the plum pudding model of the atom; in Thomson's mathematical model the "corpuscles" (or modern electrons) were arranged non-randomly, in rotating rings 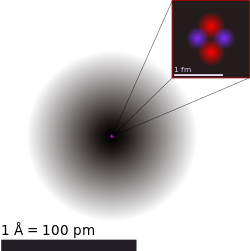 The plum pudding model, also known as the blueberry muffin model, of the atom by J. J. Thomson, who discovered the electron in 1897, was proposed in 1904 before the discovery of the atomic nucleus in order to add the electron to the atomic model. In this model, the atom is composed of electrons (which Thomson still called "corpuscles", though G. J. Stoney had proposed that atoms of electricity be called electrons in 1894[1]) surrounded by a soup of positive charge to balance the electrons' negative charges, like negatively charged "raisins" surrounded by positively charged "pudding". The electrons (as we know them today) were thought to be positioned throughout the atom, but with many structures possible for positioning multiple electrons, particularly rotating rings of electrons (see below). Instead of a soup, the atom was also sometimes said to have had a "cloud" of positive charge.

The 1904 Thomson model was disproved by the 1909 gold foil experiment of Hans Geiger and Ernest Marsden. This was interpreted by Ernest Rutherford in 1911[2] [3] to imply a very small nucleus of the atom containing a very high positive charge (in the case of gold, enough to balance about 100 electrons), thus leading to the Rutherford model of the atom. Although gold has an atomic number of 79, immediately after Rutherford's paper appeared in 1911 Antonius Van den Broek made the intuitive suggestion that atomic number is nuclear charge. The matter required experiment to decide. Henry Moseley's work showed experimentally in 1913 (see Moseley's law) that the effective nuclear charge was very close to the atomic number (Moseley found only one unit difference), and Moseley referenced only the papers of Van den Broek and Rutherford. This work culminated in the solar-system-like (but quantum-limited) Bohr model of the atom in the same year, in which a nucleus containing an atomic number of positive charge is surrounded by an equal number of electrons in orbital shells. Bohr had also inspired Moseley's work.

Thomson's model was compared (though not by Thomson) to a British dessert called plum pudding, hence the name. Thomson's paper was published in the March 1904 edition of the Philosophical Magazine, the leading British science journal of the day. In Thomson's view:

... the atoms of the elements consist of a number of negatively electrified corpuscles enclosed in a sphere of uniform positive electrification, ...[4]

In this model, the electrons were free to rotate within the blob or cloud of positive substance. These orbits were stabilized in the model by the fact that when an electron moved farther from the center of the positive cloud, it felt a larger net positive inward force, because there was more material of opposite charge, inside its orbit (see Gauss's law). In Thomson's model, electrons were free to rotate in rings which were further stabilized by interactions between the electrons, and spectra were to be accounted for by energy differences of different ring orbits. Thomson attempted to make his model account for some of the major spectral lines known for some elements, but was not notably successful at this. Still, Thomson's model (along with a similar Saturnian ring model for atomic electrons, also put forward in 1904 by Nagaoka after James Clerk Maxwell's model of Saturn's rings), were earlier harbingers of the later and more successful solar-system-like Bohr model of the atom.

The classical electrostatic treatment of electrons confined to spherical quantum dots is also similar to their treatment in the plum pudding model.[6]