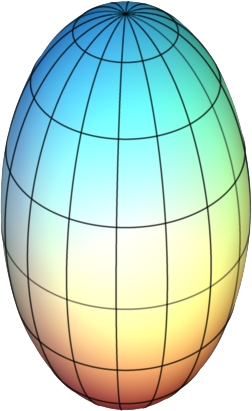 for some arbitrary constant c, in prolate spheroidal coordinates.

A prolate spheroid can be formed by rotating an ellipse about its major axis.

A prolate spheroid with b > a has surface area

The prolate spheroid is generated by rotation about the major axis of an ellipse with semi-major axis b and semi-minor axis a, therefore e may be identified as the eccentricity (see ellipse). A derivation of this result may be found at.[1]

Several moons of the Solar system approximate prolate spheroids in shape, though they are actually scalene. Examples are Mimas, Enceladus, and Tethys (satellites of Saturn) and Miranda (a satellite of Uranus). In contrast to being distorted into oblate spheroids via rapid rotation, celestial objects distort slightly into prolate spheroids via tidal forces when they orbit a massive body in a close orbit. The most extreme example is Jupiter's moon Io, which becomes slightly more or less prolate in its orbit due to a slight eccentricity, causing spectacular volcanism. It should be noted that the major axis of the prolate spheroid does not run through the satellite's poles in this case, but through the two points on its equator directly facing toward and away from the primary. A famous example in science fiction is Jinx in Larry Niven's Known Space.

It is also used to describe the shape of some nebulae (nebulas) such as the Crab Nebula.[3]

The most common shapes for the density distribution of protons and neutrons in an atomic nucleus are spherical, prolate and oblate spheroidal, where the polar axis is assumed to be the spin axis (or direction of the spin angular momentum vector). Deformed nuclear shapes occur as a result of the competition between electromagnetic repulsion between protons, surface tension and quantum shell effects.

Many submarines have a shape which can be described as prolate spheroid.