From formulasearchengine
Revision as of 03:38, 17 April 2012 by en>Chewings72 (Undid revision 487750976 by SpaceScientist101 (talk) It is not clear what you mean through your addition to the text.)
(diff) ← Older revision | Latest revision (diff) | Newer revision → (diff)
Jump to navigation Jump to search 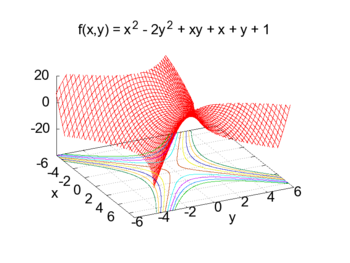 The coefficients of a polynomial are often taken to be real or complex numbers, but in fact, a polynomial may be defined over any ring.

When using the term "quadratic polynomial", authors sometimes mean "having degree exactly 2", and sometimes "having degree at most 2". If the degree is less than 2, this may be called a "degenerate case". Usually the context will establish which of the two is meant.

Sometimes the word "order" is used with the meaning of "degree", e.g. a second-order polynomial.

A quadratic polynomial may involve a single variable x, or multiple variables such as x, y, and z.

Any single-variable quadratic polynomial may be written as

where x is the variable, and a, b, and c represent the coefficients. In elementary algebra, such polynomials often arise in the form of a quadratic equation

There are three main forms :

Any quadratic polynomial with two variables may be written as

In the general case, a quadratic polynomial in n variables x1, ..., xn can be written in the form