R*-trees are a variant of R-trees used for indexing spatial information. R*-trees support point and spatial data at the same time with a slightly higher cost than other R-trees.Template:Clarify It was proposed by Norbert Beckmann, Hans-Peter Kriegel, Ralf Schneider, and Bernhard Seeger in 1990.[1] 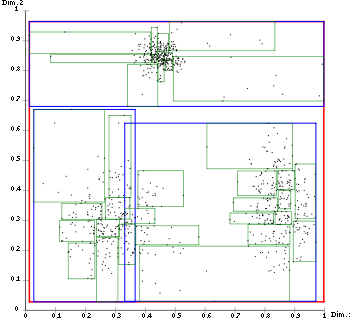 R*-Tree built by repeated insertion (in ELKI). There is little overlap in this tree, resulting in good query performance. Red and blue MBRs are index pages, green MBRs are leaf nodes.

Minimization of both coverage and overlap is crucial to the performance of R-trees. Overlap means that, on data query or insertion, more than one branch of the tree needs to be expanded (due to the way data is being split in regions which may overlap). A minimized coverage improves pruning performance, allowing to exclude whole pages from search more often, in particular for negative range queries.

The R*-tree attempts to reduce both, using a combination of a revised node split algorithm and the concept of forced reinsertion at node overflow. This is based on the observation that R-tree structures are highly susceptible to the order in which their entries are inserted, so an insertion-built (rather than bulk-loaded) structure is likely to be sub-optimal. Deletion and reinsertion of entries allows them to "find" a place in the tree that may be more appropriate than their original location.

When a node overflows, a portion of its entries are removed from the node and reinserted into the tree. (In order to avoid an indefinite cascade of reinsertions caused by subsequent node overflow, the reinsertion routine may be called only once in each level of the tree when inserting any one new entry.) This has the effect of producing more well-clustered groups of entries in nodes, reducing node coverage. Furthermore, actual node splits are often postponed, causing average node occupancy to rise. Re-insertion can be seen as a method of incremental tree optimization triggered on node overflow.

Obviously, worst case query and delete complexity are thus identical to the R-Tree. The insertion strategy to the R*-tree is with

) of the R-tree, but less complex than the quadratic split strategy (

) for a page size of

objects and has little impact on the total complexity. The total insert complexity is still comparable to the R-tree: reinsertions affect at most one branch of the tree and thus

An implementation of the full algorithm must address many corner cases and tie situations not discussed here.