The square root of 5 is the positive real number that, when multiplied by itself, gives the prime number 5. It is more precisely called the principal square root of 5, to distinguish it from the negative number with the same property. This number appears in the fractional expression for the golden ratio. It can be denoted in surd form as:

It is an irrational algebraic number.[1] The first sixty significant digits of its decimal expansion are:

which can be rounded down to 2.236 to within 99.99% accuracy. As of December 2013, its numerical value in decimal has been computed to at least ten billion digits.[2]

This irrationality proof for the square root of 5 uses Fermat's method of infinite descent:

Suppose that √5 is rational, and express it in lowest possible terms (i.e., as a fully reduced fraction) as

for natural numbers m and n. Then √5 can be expressed in lower terms as

, which is a contradiction.[3] (The two fractional expressions are equal because equating them, cross-multiplying, and canceling like additive terms gives

, which is true by the premise. The second fractional expression for √5 is in lower terms since, comparing denominators,

. And both the numerator and the denominator of the second fractional expression are positive since

is computed with the Babylonian method, starting with r0 = 2 and using rn+1 = (rn + 5/rn) / 2, the nth approximant rn is equal to the 2n-th convergent of the convergent sequence:

Relation to the golden ratio and Fibonacci numbers 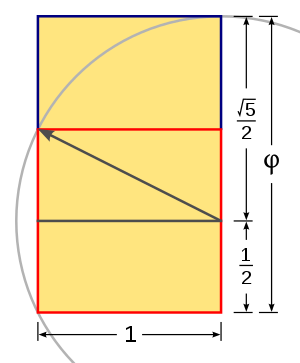 The Template:Fraction diagonal of a half square forms the basis for the geometrical construction of a golden rectangle.

) are expressed in the following formulae:

(See section below for their geometrical interpretation as decompositions of a root-5 rectangle.)

The square root of 5 then naturally figures in the closed form expression for the Fibonacci numbers, a formula which is usually written in terms of the golden ratio:

The quotient of √5 and

), and its reciprocal, provide an interesting pattern of continued fractions and are related to the ratios between the Fibonacci numbers and the Lucas numbers:[5]

Geometrically, the square root of 5 corresponds to the diagonal of a rectangle whose sides are of length 1 and 2, as is evident from the Pythagorean theorem. Such a rectangle can be obtained by halving a square, or by placing two equal squares side by side. Together with the algebraic relationship between √5 and φ, this forms the basis for the geometrical construction of a golden rectangle from a square, and for the construction of a regular pentagon given its side (since the side-to-diagonal ratio in a regular pentagon is φ).

Forming a dihedral right angle with the two equal squares that halve a 1:2 rectangle, it can be seen that √5 corresponds also to the ratio between the length of a cube edge and the shortest distance from one of its vertices to the opposite one, when traversing the cube surface (the shortest distance when traversing through the inside of the cube corresponds to the length of the cube diagonal, which is the square root of three times the edge).{{ safesubst:#invoke:Unsubst||date=__DATE__ |$B= {{#invoke:Category handler|main}}{{#invoke:Category handler|main}}[citation needed] }}

The number √5 can be algebraically and geometrically related to the square root of 2 and the square root of 3, as it is the length of the hypotenuse of a right triangle with catheti measuring √2 and √3 (again, the Pythagorean theorem proves this). Right triangles of such proportions can be found inside a cube: the sides of any triangle defined by the centre point of a cube, one of its vertices, and the middle point of a side located on one the faces containing that vertex and opposite to it, are in the ratio √2:√3:√5. This follows from the geometrical relationships between a cube and the quantities √2 (edge-to-face-diagonal ratio, or distance between opposite edges), √3 (edge-to-cube-diagonal ratio) and √5 (the relationship just mentioned above).

A rectangle with side proportions 1:√5 is called a root-five rectangle and is part of the series of root rectangles, a subset of dynamic rectangles, which are based on √1 (= 1), √2, √3, √4 (= 2), √5... and successively constructed using the diagonal of the previous root rectangle, starting from a square.[6] A root-5 rectangle is particularly notable in that it can be split into a square and two equal golden rectangles (of dimensions Φ × 1), or into two golden rectangles of different sizes (of dimensions Φ × 1 and 1 × φ).[7] It can also be decomposed as the union of two equal golden rectangles (of dimensions 1 × φ) whose intersection forms a square. All this is can be seen as the geometric interpretation of the algebraic relationships between √5, φ and Φ mentioned above. The root-5 rectangle can be constructed from a 1:2 rectangle (the root-4 rectangle), or directly from a square in a manner similar to the one for the golden rectangle shown in the illustration, but extending the arc of length Template:Fraction to both sides.

Like √2 and √3, the square root of 5 appears extensively in the formulae for exact trigonometric constants, including in the sines and cosines of every angle whose measure in degrees is divisible by 3 but not by 15.[8] The simplest of these are

and that √5 is best possible, in the sense that for any larger constant than √5, there are some irrational numbers x for which only finitely many such approximations exist.[9]

Closely related to this is the theorem[10] that of any three consecutive convergents pi/qi, pi+1/qi+1, pi+2/qi+2, of a number α, at least one of the three inequalities holds:

And the √5 in the denominator is the best bound possible since the convergents of the golden ratio make the difference on the left-hand side arbitrarily close to the value on the right-hand side. In particular, one cannot obtain a tighter bound by considering sequences of four or more consecutive convergents.[10]

contains numbers of the form

, where a and b are integers and

is the imaginary number

, like any other quadratic field, is an abelian extension of the rational numbers. The Kronecker–Weber theorem therefore guarantees that the square root of five can be written as a rational linear combination of roots of unity:

The square root of 5 appears in various identities of Ramanujan involving continued fractions.[11][12]

For example, this case of the Rogers–Ramanujan continued fraction: