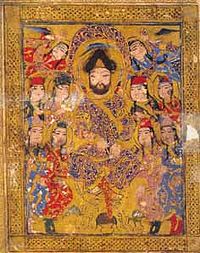 Illustration from Kitab al-aghani (Book of Songs), 1216-20, by Abu al-Faraj al-Isfahani, a collection of songs by famous musicians and Arab poets.

`Ali ibn al-Husayn ul-Isfahānī (Arabic: أبو الفرج الأصفهاني{{#invoke:Category handler|main}}‎), also known as Abu-l-Faraj or, in the West, as Abulfaraj (897–967) was an historian of Arab-Quraysh origin[1] who is noted for collecting and preserving ancient Arabic lyrics and poems in his major work, the Kitāb al-Aghānī. [2]

Abu al-Faraj al-Iṣbahānī was born in Isfahan, but spent his youth and made his early studies in Baghdad. He was a direct descendant of the last of the Umayyad caliphs, Marwan II, and was thus connected with the Umayyad rulers in Spain, and seems to have kept up a correspondence with them and to have sent them some of his works. He became famous for his knowledge of early Arabian antiquities.

His later life was spent in various parts of the Islamic world, in Aleppo with its governor Sayf ad-Dawlah (to whom he dedicated the Book of Songs), in Ray with the Buwayhid vizier Ibn 'Abbad, and elsewhere.

Although he wrote poetry, also an anthology of verses on the monasteries of Mesopotamia and Egypt, and a genealogical work, his fame rests upon his Book of Songs (Kitab al-Aghani).

Kitab al-Aghani (Book of Songs), a collection of poems and songs with the stories of the composers and singers in many volumes from the oldest epoch of Arabic literature down to the 9th century.[3] The poems were put to music, but the musical signs are no longer readable. Because of the accompanying biographical annotations on the authors and composers, the work is an important historical source. It contains a mass of information as to the life and customs of the early Arabs, and is the most valuable authority we have for their pre-Islamic and early Islamic days.