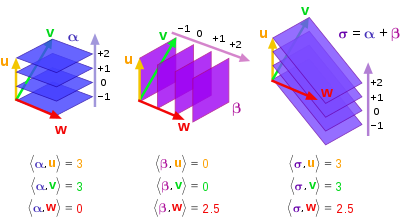 Linear functionals (1-forms) α, β and their sum σ and vectors u, v, w, in 3d Euclidean space. The number of (1-form) hyperplanes intersected by a vector equals the inner product.[1]

whose restriction to each fibre is a linear functional on the tangent space. Symbolically,

where the fi are smooth functions. From this perspective, a one-form has a covariant transformation law on passing from one coordinate system to another. Thus a one-form is an order 1 covariant tensor field.

Many real-world concepts can be described as one-forms:

Template:Rellink The most basic non-trivial differential one-form is the "change in angle" form

This is defined as the derivative of the angle "function"

(which is only defined up to a constant), which can be explicitly defined in terms of the atan2 function

Taking the derivative yields the following formula for the total derivative:

Differential of a function

), and consider a differentiable function

, with derivative f'. The differential df of f, at a point

, is defined as a certain linear map of the variable dx. Specifically,

. (The meaning of the symbol dx is thus revealed: it is simply an argument, or independent variable, of the function df.) Hence the map

sends each point x to a linear functional df(x,dx). This is the simplest example of a differential (one-)form.

In terms of the de Rham complex, one has an assignment from zero-forms (scalar functions) to one-forms i.e.,