Template:Infobox Unit The steradian (symbol: sr) or square radian[1][2] is the SI unit of solid angle. It is used in three-dimensional space, and functions analogously to the manner in which the radian quantifies planar angles. The name is derived from the Greek stereos for "solid" and the Latin radius for "ray, beam".

The steradian, like the radian, is dimensionless, essentially because a solid angle is the ratio between the area subtended and the square of its distance from the vertex: both the numerator and denominator of this ratio have dimension length squared (i.e., L²/L² = Φ - no unit). It is useful, however, to distinguish between dimensionless quantities of different nature, so in practice the symbol "sr" is used to indicate a solid angle. For example, radiant intensity can be measured in watts per steradian (W·sr−1). The steradian was formerly an SI supplementary unit, but this category was abolished from the SI in 1995 and the steradian is now considered an SI derived unit.

A steradian can be defined as the solid angle subtended at the center of a unit sphere by a unit area on its surface. For a general sphere of radius r, any portion of its surface with area A = r2 subtends one steradian.[3]

The solid angle is related to the area it cuts out of a sphere:

Because the surface area A of a sphere is 4πr2, the definition implies that a sphere measures 4π (≈ 12.56637) steradians. By the same argument, the maximum solid angle that can be subtended at any point is 4π sr.

Since A = r2, it corresponds to the area of a spherical cap (A = 2πrh) (wherein h stands for the "height" of the cap), and the relationship h/r = 1/(2π) holds. Therefore one steradian corresponds to the plane (i.e. radian) angle of the cross-section of a simple cone subtending the plane angle 2θ, with θ given by:

The solid angle of a cone whose cross-section subtends the angle 2θ is:

In two dimensions, an angle is related to the arc length it cuts out:

l is arc length,
r is the radius of the circle, and
rad is the radian.

Now in three dimensions, the solid angle is related to the area it cuts out:

A is the surface area of the spherical cap, 2πrh,
r is the radius of the sphere, and
sr is the steradian.

A complete sphere subtends only 4π ≈ 12.56637 steradians, so multiples larger than the decasteradian are rarely used. 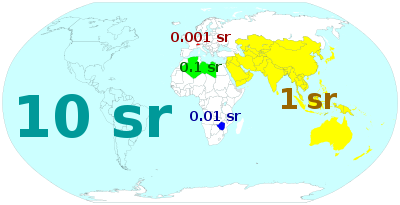