In ocular physiology, adaptation is the ability of the eye to adjust to various levels of darkness and light.

The human eye can function from very dark to very bright levels of light; its sensing capabilities reach across nine orders of magnitude. This means that the brightest and the darkest light signal that the eye can sense are a factor of roughly 1,000,000,000 apart. However, in any given moment of time, the eye can only sense a contrast ratio of one thousand. What enables the wider reach is that the eye adapts its definition of what is black.

The eye takes approximately 20–30 minutes to fully adapt from bright sunlight to complete darkness and become ten thousand to one million times more sensitive than at full daylight. In this process, the eye's perception of color changes as well (this is called the Purkinje effect). However, it takes approximately five minutes for the eye to adapt to bright sunlight from darkness. This is due to cones obtaining more sensitivity when first entering the dark for the first five minutes but the rods take over after five or more minutes.[1]

Dark adaptation is far quicker and deeper in young people than the elderly. [2]

A minor mechanism of adaptation is the pupillary light reflex, adjusting the amount of light that reaches the retina.

In response to varying ambient light levels, rods and cones of eye function both in isolation and in tandem to adjust the visual system. Changes in the sensitivity of rods and cones in the eye are the major contributors to dark adaptation.

Above a certain luminance level (about 0.03 cd/m2), the cone mechanism is involved in mediating vision; photopic vision. Below this level, the rod mechanism comes into play providing scotopic (night) vision. The range where two mechanisms are working together is called the mesopic range, as there is not an abrupt transition between the two mechanism. This adaptation forms the basis of the Duplicity Theory[3]

Rhodopsin, a biological pigment in the photoreceptors of the retina immediately photobleaches in response to light.[4] Rods are more sensitive to light and so take longer to fully adapt to the change in light. Rods, whose photopigments regenerate more slowly, do not reach their maximum sensitivity for about half an hour.[1][5] Cones take approximately 9–10 minutes to adapt to the dark.[1] Sensitivity to light is modulated by changes in intracellular calcium ions and cyclic guanosine monophosphate.[6]

Intensity and Duration of the pre-adapting light

Size and Location on the Retina

The location of the test spot affects the dark adaptation curve because of the distribution of the rods and cones in the retina.[9]

Wavelength of the Threshold Light

Dark adaptation depends upon photopigment bleaching, which effects the threshold of both cones and rods.[8]

Inhibition by neurons also affects activation in synapses. Together with the bleaching of a rod or cone pigment, merging of signals on ganglion cells are inhibited, reducing convergence. Alpha adaptation, i.e. rapid sensitivity fluctuations, is powered by nerve control. The merging of signals by virtue of the diffuse ganglion cells, as well as horizontal and amacrine cells, allow a cumulative effect. Thus that area of stimulation is inversely proportional to intensity of light, a strong stimulus of 100 rods equivalent to a weak stimulus of 1,000 rods.

In sufficiently bright light, convergence is low, but during dark adaptation, convergence of rod signals boost. This is not due to structural changes, but by a possible shutdown of inhibition that stops convergence of messages in bright light. If only one eye is open, the closed eye must adapt separately upon reopening to match the already adapted eye.[1] 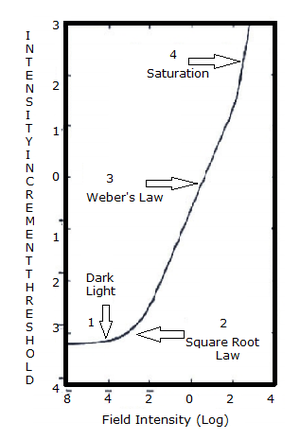 Schematic of the increment threshold curve of the rod system

When the threshold curve for a single system, i.e. just cones or just rods, is taken in isolation it can been seen to possesses four sections:[11]

The threshold in this portion of the TVI curve is determined by the dark/light level. Sensitivity is limited by neural noise. The background field is relatively low and does not significantly affect threshold.

This part of the curve is limited by quantal fluctuation in the background. The visual system is usually compared with a theoretical construct called the ideal light detector. To detect the stimulus, the stimulus must sufficiently exceed the fluctuations of the background (noise).

Threshold increases with background luminance proportional to the square root of the background.[12]

At saturation, the rod system becomes unable to detect the stimulus. This section of the curve occurs for the cone mechanism under high background levels.[13]

Insufficiency of adaptation most commonly presents as insufficient adaptation to dark environment, called night blindness or nyctalopia. The opposite problem, known as hemeralopia, that is, inability to see clearly in bright light, is much rarer.

The fovea is blind to dim light (due to its cone-only array) and the rods are more sensitive, so a dim star on a moonless night must be viewed from the side, so it stimulates the rods. This is not due to pupil width since an artificial fixed-width pupil gives the same results.[1]