In mathematics, an adjunction space (or attaching space) is a common construction in topology where one topological space is attached or "glued" onto another. Specifically, let X and Y be topological spaces with A a subspace of Y. Let f : A → X be a continuous map (called the attaching map). One forms the adjunction space X ∪f Y by taking the disjoint union of X and Y and identifying x with f(x) for all x in A. Schematically,

Sometimes, the adjunction is written as

. Intuitively, we think of Y as being glued onto X via the map f.

As a set, X ∪f Y consists of the disjoint union of X and (Y − A). The topology, however, is specified by the quotient construction. In the case where A is a closed subspace of Y one can show that the map X → X ∪f Y is a closed embedding and (Y − A) → X ∪f Y is an open embedding.

The attaching construction is an example of a pushout in the category of topological spaces. That is to say, the adjunction space is universal with respect to following commutative diagram: 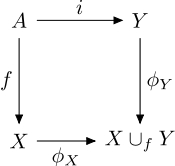 Here i is the inclusion map and φX, φY are the maps obtained by composing the quotient map with the canonical injections into the disjoint union of X and Y. One can form a more general pushout by replacing i with an arbitrary continuous map g — the construction is similar. Conversely, if f is also an inclusion the attaching construction is to simply glue X and Y together along their common subspace.