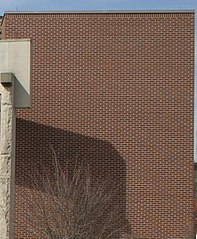 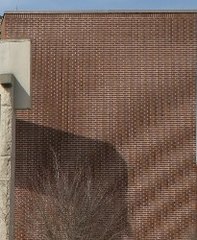 Spatial aliasing in the form of a moiré pattern

In signal processing and related disciplines, aliasing is an effect that causes different signals to become indistinguishable (or aliases of one another) when sampled. It also refers to the distortion or artifact that results when the signal reconstructed from samples is different from the original continuous signal.

Left: An aliased image of the letter A in Times New Roman. Right: An anti-aliased image. (See also: Font rasterization)

When a digital image is viewed, a reconstruction is performed by a display or printer device, and by the eyes and the brain. If the image data is not properly processed during sampling or reconstruction, the reconstructed image will differ from the original image, and an alias is seen.

An example of spatial aliasing is the moiré pattern one can observe in a poorly pixelized image of a brick wall. Spatial anti-aliasing techniques avoid such poor pixelizations. Aliasing can be caused either by the sampling stage or the reconstruction stage; these may be distinguished by calling sampling aliasing {{safesubst:#invoke:anchor|main}} prealiasing and reconstruction aliasing {{safesubst:#invoke:anchor|main}} postaliasing.[1]

Temporal aliasing is a major concern in the sampling of video and audio signals. Music, for instance, may contain high-frequency components that are inaudible to humans. If a piece of music is sampled at 32000 samples per second (Hz), any frequency components above 16000 Hz (the Nyquist frequency) will cause aliasing when the music is reproduced by a digital to analog converter (DAC). To prevent this an anti-aliasing filter is used to remove components above the Nyquist frequency prior to sampling.

In video or cinematography, temporal aliasing results from the limited frame rate, and causes the wagon-wheel effect, whereby a spoked wheel appears to rotate too slowly or even backwards. Aliasing has changed its apparent frequency of rotation. A reversal of direction can be described as a negative frequency. Temporal aliasing frequencies in video and cinematography are determined by the frame rate of the camera, but the relative intensity of the aliased frequencies is determined by the shutter timing (exposure time) or the use of a temporal aliasing reduction filter during filming.[2]

Like the video camera, most sampling schemes are periodic; that is, they have a characteristic sampling frequency in time or in space. Digital cameras provide a certain number of samples (pixels) per degree or per radian, or samples per mm in the focal plane of the camera. Audio signals are sampled (digitized) with an analog-to-digital converter, which produces a constant number of samples per second. Some of the most dramatic and subtle examples of aliasing occur when the signal being sampled also has periodic content.

Actual signals have finite duration and their frequency content, as defined by the Fourier transform, has no upper bound. Some amount of aliasing always occurs when such functions are sampled. Functions whose frequency content is bounded (bandlimited) have infinite duration. If sampled at a high enough rate, determined by the bandwidth, the original function can in theory be perfectly reconstructed from the infinite set of samples.

Sometimes aliasing is used intentionally on signals with no low-frequency content, called bandpass signals. Undersampling, which creates low-frequency aliases, can produce the same result, with less effort, as frequency-shifting the signal to lower frequencies before sampling at the lower rate. Some digital channelizers[3] exploit aliasing in this way for computational efficiency. See Sampling (signal processing), Nyquist rate (relative to sampling), and Filter bank.

Sinusoids are an important type of periodic function, because realistic signals are often modeled as the summation of many sinusoids of different frequencies and different amplitudes ( as , for example, with a Fourier series or transform ). Understanding what aliasing does to the individual sinusoids is useful in understanding what happens to their sum.

Two different sinusoids that fit the same set of samples.

Here, a plot depicts a set of samples whose sample-interval is 1, and two (of many) different sinusoids that could have produced the samples. The sample-rate in this case is

. For instance, if the interval is 1 second, the rate is 1 sample per second. Nine cycles of the red sinusoid and 1 cycle of the blue sinusoid span an interval of 10 samples. The corresponding number of cycles per sample are

In general, when a sinusoid of frequency

is sampled with frequency

the resulting number of cycles per sample is

by any integer (positive or negative).[note 1]  Replacing negative frequency sinusoids by their equivalent positive frequency representations, we can express all the aliases of frequency

for any integer N,  with

being the true value, and N has units of cycles per sample. Then the N = 1 alias of

Aliasing matters when one attempts to reconstruct the original waveform from its samples. The most common reconstruction technique produces the smallest of the

frequencies. So it is usually important that

be the unique minimum. A necessary and sufficient condition for that is

In our example, the Nyquist condition is satisfied if the original signal is the blue sinusoid (

the usual reconstruction method will produce the blue sinusoid instead of the red one.

The black dots are aliases of each other. The solid red line is an example of amplitude varying with frequency. The dashed red lines are the corresponding paths of the aliases.

In the example above,

are symmetrical around the frequency

And in general, as

and some of its aliases at

would look like the 4 black dots in the adjacent figure. The red lines depict the paths (loci) of the 4 dots if we were to adjust the frequency and amplitude of the sinusoid along the solid red segment (between

). No matter what function we choose to change the amplitude vs frequency, the graph will exhibit symmetry between 0 and

This symmetry is commonly referred to as folding, and another name for

(the Nyquist frequency) is folding frequency. Folding is most often observed in practice when viewing the frequency spectrum of real-valued samples using a discrete Fourier transform.

Two complex sinusoids, colored gold and cyan, that fit the same sets of real and imaginary sample points when sampled at the rate (fs) indicated by the grid lines. The case shown here is:

Complex sinusoids are waveforms whose samples are complex numbers, and the concept of negative frequency is necessary to distinguish them. In that case, the frequencies of the aliases are given by just:

Illustration of 4 waveforms reconstructed from samples taken at six different rates. Two of the waveforms are sufficiently sampled to avoid aliasing at all six rates. The other two illustrate increasing distortion (aliasing) at the lower rates.

is met for the highest frequency component of the original signal, then it is met for all the frequency components, a condition known as the Nyquist criterion. That is typically approximated by filtering the original signal to attenuate high frequency components before it is sampled. They still generate low-frequency aliases, but at very low amplitude levels, so as not to cause a problem. A filter chosen in anticipation of a certain sample frequency is called an anti-aliasing filter. The filtered signal can subsequently be reconstructed without significant additional distortion, for example by the Whittaker–Shannon interpolation formula.

The Nyquist criterion presumes that the frequency content of the signal being sampled has an upper bound. Implicit in that assumption is that the signal's duration has no upper bound. Similarly, the Whittaker–Shannon interpolation formula represents an interpolation filter with an unrealizable frequency response. These assumptions make up a mathematical model that is an idealized approximation, at best, to any realistic situation. The conclusion, that perfect reconstruction is possible, is mathematically correct for the model, but only an approximation for actual samples of an actual signal.

Historically the term aliasing evolved from radio engineering because of the action of superheterodyne receivers. When the receiver shifts multiple signals down to lower frequencies, from RF to IF by heterodyning, an unwanted signal, from an RF frequency equally far from the local oscillator (LO) frequency as the desired signal, but on the wrong side of the LO, can end up at the same IF frequency as the wanted one. If it is strong enough it can interfere with reception of the desired signal. This unwanted signal is known as an image or alias of the desired signal.

Aliasing occurs whenever the use of discrete elements to capture or produce a continuous signal causes frequency ambiguity.

Spatial aliasing, particular of angular frequency, can occur when reproducing a light field[4] or sound field with discrete elements, as in 3D displays or wave field synthesis of sound.

This aliasing is visible in images such as posters with lenticular printing: if they have low angular resolution, then as one moves past them, say from left-to-right, the 2D image does not initially change (so it appears to move left), then as one moves to the next angular image, the image suddenly changes (so it jumps right) – and the frequency and amplitude of this side-to-side movement corresponds to the angular resolution of the image (and, for frequency, the speed of the viewer's lateral movement), which is the angular aliasing of the 4D light field.

The lack of parallax on viewer movement in 2D images and in 3-D film produced by stereoscopic glasses (in 3D films the effect is called "yawing", as the image appears to rotate on its axis) can similarly be seen as loss of angular resolution, all angular frequencies being aliased to 0 (constant).

The qualitative effects of aliasing can be heard in the following audio demonstration. Six sawtooth waves are played in succession, with the first two sawtooths having a fundamental frequency of 440 Hz (A4), the second two having fundamental frequency of 880 Hz (A5), and the final two at 1760 Hz (A6). The sawtooths alternate between bandlimited (non-aliased) sawtooths and aliased sawtooths and the sampling rate is 22.05 kHz. The bandlimited sawtooths are synthesized from the sawtooth waveform's Fourier series such that no harmonics above the Nyquist frequency are present.

A form of spatial aliasing can also occur in antenna arrays or microphone arrays used to estimate the direction of arrival of a wave signal, as in geophysical exploration by seismic waves. Waves must be sampled at more than two points per wavelength, or the wave arrival direction becomes ambiguous.[5]