The ampere (SI unit symbol: A; SI dimension symbol: I), often shortened to amp,[1] is the SI unit of electric current[2][3] (quantity symbol: Template:Mvar, Template:Mvar)[4] and is one of the seven[5] SI base units. It is named after André-Marie Ampère (1775–1836), French mathematician and physicist, considered the father of electrodynamics.

In practical terms, the ampere is a measure of the amount of electric charge passing a point in an electric circuit per unit time, with an equivalent charge to Template:Val electrons (or one coulomb) per second constituting one ampere.[6] Ampere is a measure of flow rate of electric charge. If we increase the number of charged particles, the charge on the particles, or the speed at which the particles are moving past a specified point, the amperes at that point will also increase. 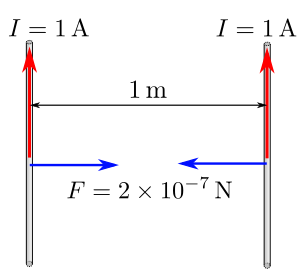 Ampère's force law[7][8] states that there is an attractive or repulsive force between two parallel wires carrying an electric current. This force is used in the formal definition of the ampere, which states that it is "the constant current that will produce an attractive force of 2 × 10–7 newton per metre of length between two straight, parallel conductors of infinite length and negligible circular cross section placed one metre apart in a vacuum".[2][9]

The SI unit of charge, the coulomb, "is the quantity of electricity carried in 1 second by a current of 1 ampere".[10] Conversely, a current of one ampere is one coulomb of charge going past a given point per second:

In general, charge Q is determined by steady current I flowing for a time t as Q = It.

The ampere was originally defined as one tenth of the CGS system electromagnetic unit of current (now known as the abampere), the amount of current that generates a force of two dynes per centimetre of length between two wires one centimetre apart.[11] The size of the unit was chosen so that the units derived from it in the MKSA system would be conveniently sized.

The "international ampere" was an early realization of the ampere, defined as the current that would deposit Template:Val grams of silver per second from a silver nitrate solution.[12] Later, more accurate measurements revealed that this current is 0.99985 A.

The standard ampere is most accurately realized using a watt balance, but is in practice maintained via Ohm's law from the units of electromotive force and resistance, the volt and the ohm, since the latter two can be tied to physical phenomena that are relatively easy to reproduce, the Josephson junction and the quantum Hall effect, respectively.[13]

At present, techniques to establish the realization of an ampere have a relative uncertainty of approximately a few parts in 107, and involve realizations of the watt, the ohm and the volt.[13]

{{#invoke:main|main}} The current drawn by typical constant-voltage energy distribution systems is usually dictated by the power (watts) consumed by the system and the operating voltage. For this reason the examples given below are grouped by voltage level.

A typical motor vehicle has a 12 V battery. The various accessories that are powered by the battery might include:

Household circuit breakers typically provide a maximum of 15 A or 20 A of current to a given set of outlets.

The current drawn by a number of typical appliances are: