Anaïs Nin (Template:IPA-es; born Angela Anaïs Juana Antolina Rosa Edelmira Nin y Culmell, February 21, 1903 – January 14, 1977) was an author born to Spanish-Cuban parents in France, where she was also raised. She spent some time in Spain and Cuba but lived most of her life in the United States where she became an established author. She published journals (which span more than 60 years, beginning when she was 11 years old and ending shortly before her death), novels, critical studies, essays, short stories, and erotica. A great deal of her work, including Delta of Venus and Little Birds, was published posthumously.

Anaïs Nin was born in Neuilly, France, to artistic parents. Her father, Joaquín Nin, was a Spanish-Cuban pianist and composer, when he met her mother Rosa Culmell,[1] a classically trained singer of French and Danish descent who was working in Cuba.[2] Her father's grandfather had fled France during the Revolution, going first to Saint-Domingue, then New Orleans, and finally to Cuba where he helped build that country's first railway.[3]

Nin was raised a Roman Catholic[4] and spent her childhood and early life in Europe. After her parents separated, her mother moved Anaïs and her two brothers, Thorvald Nin and Joaquin Nin-Culmell, to Barcelona, and then to New York City. According to her diaries, Volume One, 1931–1934, Nin abandoned formal schooling at the age of sixteen years and later began working as an artist's model. After being in America for several years, Nin had forgotten how to speak Spanish, but retained her French and became fluent in English.[5]

On March 3, 1923, in Havana, Cuba, Nin married her first husband, Hugh Parker Guiler (1898–1985), a banker and artist, later known as "Ian Hugo" when he became a maker of experimental films in the late 1940s. The couple moved to Paris the following year, where Guiler pursued his banking career and Nin began to pursue her interest in writing; in her diaries she also mentions having trained as a flamenco dancer in Paris in the mid-to-late 1920s. Her first published work was a critical evaluation of D. H. Lawrence called D. H. Lawrence: An Unprofessional Study, which she wrote in sixteen days.[1]

She was transformed by her therapy with Otto Rank, who broke with Freud over Freud's failure to appreciate the power of women's sexuality, the value of art, and the meaning of the mother-child relationship. On her second visit to Rank, Nin reflects on her desire to be “re-born,” feelingly, as a woman and artist. Rank, she observes, helped her move back and forth between what she could verbalize in her journals and what remained unarticulated. She discovered the quality and depth of her feelings in the wordless transitions between what she could say and what she could not say. “As he talked, I thought of my difficulties with writing, my struggles to articulate feelings not easily expressed. Of my struggles to find a language for intuition, feeling, instincts which are, in themselves, elusive, subtle, and wordless”.[6]

In the late summer of 1939, when residents from overseas were urged to leave France due to the approaching war, Nin left Paris and returned to New York City with her husband. (Guiler was, according to his own wishes, all but edited out of the diaries published during Nin's lifetime; his role in her life is therefore difficult to gauge).[7] During the war, Nin sent her books to Frances Steloff of the Gotham Book Mart in New York for safekeeping.[8]

According to her diaries, Vol.1, 1931–1934, Nin shared a bohemian lifestyle with Henry Miller during her time in Paris. Her husband Guiler is not mentioned anywhere in the published edition of the 1930s parts of her diary (Vol. 1–2) although the opening of Vol. 1 makes it clear that she is married, and the introduction suggests her husband refused to be included in the published diaries. Nin appeared in the Kenneth Anger film Inauguration of the Pleasure Dome (1954) as Astarte; in the Maya Deren film Ritual in Transfigured Time (1946); and in Bells of Atlantis (1952), a film directed by Guiler under the name "Ian Hugo" with a soundtrack of electronic music by Louis and Bebe Barron. The diaries edited by her second husband, after her death, tell that her union with Henry Miller was very passionate and physical, and that she believed that it was a pregnancy by him that she aborted in 1934.

In 1947, at the age of 44, she met former actor Rupert Pole in a Manhattan elevator on her way to a party.[9][10] The two ended up dating and traveled to California together; Pole was sixteen years her junior. On March 17, 1955, she married him at Quartzsite, Arizona, returning with Pole to live in California.[11] Guiler remained in New York City and was unaware of Nin's second marriage until after her death in 1977, though biographer Deirdre Bair alleges that Guiler knew what was happening while Nin was in California, but consciously "chose not to know".[10]

Nin referred to her simultaneous marriages as her "bicoastal trapeze".[10] According to Deidre Bair:

[Anaïs] would set up these elaborate façades in Los Angeles and in New York, but it became so complicated that she had to create something she called the lie box. She had this absolutely enormous purse and in the purse she had two sets of checkbooks. One said Anaïs Guiler for New York and another said Anaïs Pole for Los Angeles. She had prescription bottles from California doctors and New York doctors with the two different names. And she had a collection of file cards. And she said, "I tell so many lies I have to write them down and keep them in the lie box so I can keep them straight."[10]

In 1966, Nin had her marriage with Pole annulled, due to the legal issues arising from both Guiler and Pole having to claim her as a dependent on their federal tax returns.[12] Though the marriage was annulled, Nin and Pole continued to live together as if they were married, up until her death in 1977.

After Guiler's death in 1985, the unexpurgated versions of her journals were commissioned by Pole.[13] Pole died in July 2006.

Nin often cited authors Djuna Barnes and D. H. Lawrence as inspirations. She states in Volume One of her diaries that she drew inspiration from Marcel Proust, André Gide, Jean Cocteau, Paul Valéry, and Arthur Rimbaud.

Anaïs Nin is perhaps best remembered as a diarist. Her journals, which span several decades, provide a deeply explorative insight into her personal life and relationships. Nin was acquainted, often quite intimately, with a number of prominent authors, artists, psychoanalysts, and other figures, and wrote of them often, especially Otto Rank. Moreover, as a female author describing a primarily masculine constellation of celebrities, Nin's journals have acquired importance as a counterbalancing perspective.

Previously unpublished works are coming to light in A Café in Space, the Anaïs Nin Literary Journal, which most recently includes "Anaïs Nin and Joaquín Nin y Castellanos: Prelude to a Symphony—Letters between a father and daughter."

So far fifteen volumes of her journals have been published. 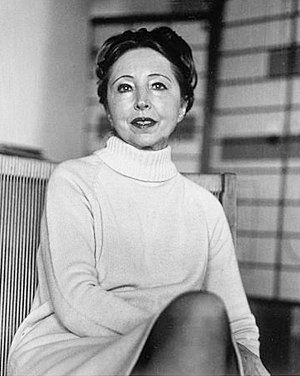 Portrait of Anaïs Nin in the 1970s by Elsa Dorfman

Nin was a friend, and in some cases lover, of many leading literary figures, including Henry Miller, John Steinbeck, Antonin Artaud, Edmund Wilson, Gore Vidal, James Agee, James Leo Herlihy, and Lawrence Durrell. Her passionate love affair and friendship with Miller strongly influenced her both sexually and as an author. Nin wrote about her infatuation with the Surrealist artist Bridget Bate Tichenor in her diaries.[19][20] Claims that Nin was bisexual were given added circulation by the Philip Kaufman film Henry & June about Henry Miller and his second wife June Miller. Nin's first unexpurgated journal, Henry and June, makes it clear that Nin was stirred by June to the point of saying (paraphrasing), "I have become June," though it is unclear whether she consummated her feelings for her sexually. To both Anaïs and Henry, June was a femme fatale—irresistible, cunning, erotic. Nin gave June money, jewelry, clothes, often leaving herself broke.

In her second unexpurgated journal, Incest, she wrote that she had an incestuous relationship with her father, which was graphically described (207–15). When Nin's father learned of the title of her first book of fiction, House of Incest, he feared that the true nature of their relationship would be revealed, when, in fact, it was heavily veiled in Nin's text.

The explosion of the feminist movement in the 1960s gave feminist perspectives on Nin's writings of the past twenty years, which made Nin a popular lecturer at various universities; contrarily, Nin disassociated herself from the political activism of the movement.[1]

In 1973 Anaïs Nin received an honorary doctorate from the Philadelphia College of Art. She was elected to the United States National Institute of Arts and Letters in 1974. She died in Los Angeles, California on January 14, 1977 after a three-year battle with cancer.[21] Her body was cremated, and her ashes were scattered over Santa Monica Bay in Mermaid Cove. Her first husband, Hugh Guiler, died in 1985, and his ashes were scattered in the cove as well.[10] Rupert Pole was named Nin's literary executor, and he arranged to have new unexpurgated editions of Nin's books and diaries published between 1985 and his death in 2006.

Philip Kaufman directed the 1990 film Henry & June based on Nin's novel Henry and June: From the Unexpurgated Diary of Anaïs Nin. She was portrayed in the film by Maria de Medeiros.

On September 27th, 2013, screenwriter and author Kim Krizan published an article on Huffington Post[22] revealing she had found a previously unpublished love letter written by Gore Vidal to Nin. This letter contradicts Gore Vidal's previous characterization of his relationship with Nin, showing that Vidal did have feelings for Nin that he later heavily disavowed in his autobiography, Palimpsest. Krizan did this research in the run up to the release of the latest volume of Anaïs Nin's uncensored diary, Mirages[23], for which Krizan provided the foreword.[24]