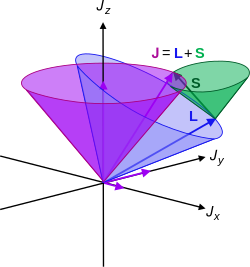 The classical definition of angular momentum is

However, there is another type of angular momentum, called spin angular momentum (more often shortened to spin), represented by the spin operator S. Almost all elementary particles have spin. Spin is often depicted as a particle literally spinning around an axis, but this is a misleading and inaccurate picture: Spin is an intrinsic property of a particle, unrelated to any sort of motion in space. All elementary particles have a characteristic spin, for example electrons always have "spin 1/2" while photons always have "spin 1".

Conservation of angular momentum states that J for a closed system, or J for the whole universe, is conserved. However, L and S are not generally conserved. For example, the spin–orbit interaction allows angular momentum to transfer back and forth between L and S, with the total J remaining constant.

This is analogous to the definition of angular momentum in classical physics.

In the special case of a single particle with no electric charge and no spin, the angular momentum operator can be written in the position basis as a single vector equation:

where ∇ is the vector differential operator, del.

The orbital angular momentum operator is a vector operator, meaning it can be written in terms of its vector components

. The components have the following commutation relations with each other:[2]

where [ , ] denotes the commutator

This can be written generally as

A compact expression as one vector equation is also possible:[3]

, where δlm is the Kronecker delta.

These can be assumed to hold in analogy with L. Alternatively, they can be derived as discussed below.

There is an analogous relationship to the commutator in classical physics which is central to the theory of canonical transformations of Hamilton's equations of motion:[5]

(summation over generalized coordinate index i implied) where, in this bilinear expression,

is the Poisson bracket of two functions

with respect to the canonical (generalized) coordinates

. "... identification of the canonical angular momentum as the generator of rigid rotation of [a system of particles] leads to a number of interesting and important Poisson bracket relations."[6] Among these are:

, for example, is a transformation generated by the generalized momentum conjugate to

It can be shown[7] (using Cartesian coordinates x, y and z for each particle i in the system) that

has the physical significance of being the z-component of the total angular momentum:

It is important to recognize that the Poisson bracket is an analogue, not the commutator in disguise. Hamilton's equations do not generalize to quantum mechanics because they assume that the position and momentum of a particle can be known simultaneously to infinite precision at any point in time. See the section "Generalization to quantum mechanics through Poisson bracket" in the article on Hamiltonian mechanics for details and additional references.

Like any vector, a magnitude can be defined for the orbital angular momentum operator,

L2 is another quantum operator. It commutes with the components of L,

One way to prove that these operators commute is to start from the [Lℓ, Lm] commutation relations in the previous section:

Mathematically, L2 is a Casimir invariant of the Lie algebra so(3) spanned by L.

In the classical case, L is the orbital angular momentum of the entire system of particles, n is the unit vector along one of the Cartesian axes, and we also have Poisson bracket pseudo-commutation of L with each of its Cartesian components:[9]

with n selecting one of the three Cartesian components of L.

is the standard deviation in the measured values of X and

denotes the expectation value of X. This inequality is also true if x,y,z are rearranged, or if L is replaced by J or S.

Therefore, two orthogonal components of angular momentum cannot be simultaneously known or measured, except in special cases such as

It is, however, possible to simultaneously measure or specify L2 and any one component of L; for example, L2 and Lz. This is often useful, and the values are characterized by azimuthal quantum number and magnetic quantum number, as discussed further below.

{{#invoke:see also|seealso}} In quantum mechanics, angular momentum is quantized – that is, it cannot vary continuously, but only in "quantum leaps" between certain allowed values. For any system, the following restrictions on measurement results apply, where

is a state in the simultaneous eigenbasis of

(i.e., a state with a single, definite value of

and a single, definite value of

). Then using the commutation relations, one can prove that

are also in the simultaneous eigenbasis, with the same value of

is increased or decreased by

, respectively. (It is also possible that one or both of these vectors is the zero vector.) (For a proof, see ladder operator#angular momentum.)

By manipulating these ladder operators and using the commutation rules, it is possible to prove almost all of the quantization rules above.

Since S and L have the same commutation relations as J, the same ladder analysis works for them.

The ladder-operator analysis does not explain one aspect of the quantization rules above: the fact that L (unlike J and S) cannot have half-integer quantum numbers. This fact can be proven (at least in the special case of one particle) by writing down every possible eigenfunction of L2 and Lz, (they are the spherical harmonics), and seeing explicitly that none of them have half-integer quantum numbers.[12] An alternative derivation is below. 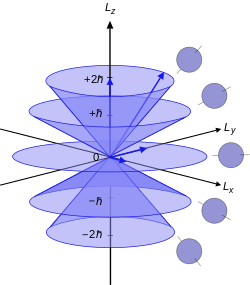 Illustration of the vector model of orbital angular momentum.

{{#invoke:main|main}} Since the angular momenta are quantum operators, they cannot be drawn as vectors like in classical mechanics. Nevertheless, it is common to depict them heuristically in this way. Depicted on the right is a set of states with quantum numbers

for the five cones from bottom to top. Since

, the vectors are all shown with length

. The rings represent the fact that

is known with certainty, but

are unknown; therefore every classical vector with the appropriate length and z-component is drawn, forming a cone. The expected value of the angular momentum for a given ensemble of systems in the quantum state characterized by

do not commute with each other).

The quantization rules are technically true even for macroscopic systems, like the angular momentum L of a spinning tire. However they have no observable effect. For example, if

Angular momentum as the generator of rotations

{{#invoke:see also|seealso}} The most general and fundamental definition of angular momentum is as the generator of rotations.[4] More specifically, let

be a rotation operator, which rotates any quantum state about axis

approaches the identity operator, because a rotation of 0° maps all states to themselves. Then the angular momentum operator

where 1 is the identity operator. Remark also that R is an additive morphism :

where exp is matrix exponential. 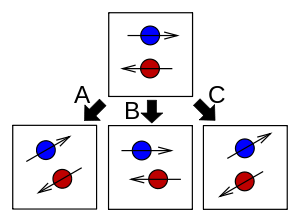 rotates the position (in space) of all particles and fields, without rotating the internal (spin) state of any particle. Likewise, the operator

rotates the internal (spin) state of all particles, without moving any particles or fields in space. The relation J=L+S comes from:

i.e. if the positions are rotated, and then the internal states are rotated, then altogether the complete system has been rotated.

(a rotation of 360° is the identity operator), this is not assumed in quantum mechanics, and it turns out it is often not true: When the total angular momentum quantum number is a half-integer (1/2, 3/2, etc.),

, and when it is an integer,

On the other hand,

operators carry the structure of SO(3), while

carry the structure of SU(2).

, one picks an eigenstate

which is to say that the orbital angular momentum quantum numbers can only be integers, not half-integers.

, consider the set of states

, i.e. the set of states that come about from rotating the starting state in every possible way. This is a vector space, and therefore the manner in which the rotation operators map one state onto another is a representation of the group of rotation operators.

When rotation operators act on quantum states, it forms a representation of the Lie group SU(2) (for R and Rinternal), or SO(3) (for Rspatial).

From the relation between J and rotation operators,

When angular momentum operators act on quantum states, it forms a representation of the Lie algebra SU(2) or SO(3).

The ladder operator derivation above is a method for classifying the representations of the Lie algebra SU(2).

(This same calculational procedure is one way to answer the mathematical question "What is the Lie algebra of the Lie groups SO(3) or SU(2)?")

The Hamiltonian H represents the energy and dynamics of the system. In a spherically-symmetric situation, the Hamiltonian is invariant under rotations:

where R is a rotation operator. As a consequence,

due to the relationship between J and R. By the Ehrenfest theorem, it follows that J is conserved.

To summarize, if H is rotationally-invariant (spherically symmetric), then total angular momentum J is conserved. This is an example of Noether's theorem.

). Alternatively, H may be the Hamiltonian of all particles and fields in the universe, and then H is always rotationally-invariant, as the fundamental laws of physics of the universe are the same regardless of orientation. This is the basis for saying conservation of angular momentum is a general principle of physics.

For a particle without spin, J=L, so orbital angular momentum is conserved in the same circumstances. When the spin is nonzero, the spin-orbit interaction allows angular momentum to transfer from L to S or back. Therefore, L is not, on its own, conserved.

In these situations, it is often useful to know the relationship between, on the one hand, states where

all have definite values, and on the other hand, states where

all have definite values, as the latter four are usually conserved (constants of motion). The procedure to go back and forth between these bases is to use Clebsch–Gordan coefficients.

For an atom or molecule with J = L + S, the term symbol gives the quantum numbers associated with the operators

When solving to find eigenstates of this operator, we obtain the following

are the spherical harmonics.