The direction of the angular velocity vector is perpendicular to the plane of rotation, in a direction which is usually specified by the right-hand rule.[1]

Angular velocity of a particle 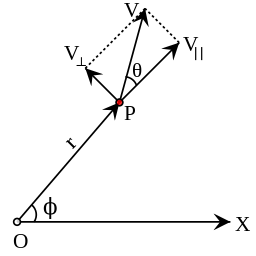 The angular velocity of the particle at P with respect to the origin O is determined by the perpendicular component of the velocity vector v. 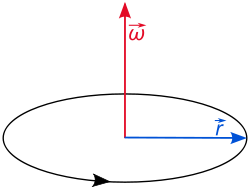 In two dimensions the angular velocity ω is given by

This is related to the cross-radial (tangential) velocity by:[1]

An explicit formula for v⊥ in terms of v and θ is:

Combining the above equations gives a formula for ω:

There are three types of angular velocity involved in the movement on an ellipse corresponding to the three anomalies (true, eccentric and mean).

be a unitary vector along the instantaneous rotation axis, so that from the top of the vector the rotation is counter-clock-wise. The angular velocity vector

is then defined as:

Just as in the two dimensional case, a particle will have a component of its velocity along the radius from the origin to the particle, and another component perpendicular to that radius. The combination of the origin point and the perpendicular component of the velocity defines a plane of rotation in which the behavior of the particle (for that instant) appears just as it does in the two dimensional case. The axis of rotation is then a line normal to this plane, and this axis defined the direction of the angular velocity pseudovector, while the magnitude is the same as the pseudoscalar value found in the 2-dimensional case. Using the unit vector

defined before, the angular velocity vector may be written in a manner similar to that for two dimensions:

which, by the definition of the cross product, can be written:

If a point rotates with

which rotates itself with angular speed

with respect to an external frame

, we can define the addition of

as the angular velocity vector of the point with respect to

With this operation defined like this, angular velocity, which is a pseudovector, becomes also a real vector because it has two operations:

This is the definition of a vector space. The only property that presents difficulties to prove is the commutativity of the addition. This can be proven from the fact that the velocity tensor W (see below) is skew-symmetric. Therefore

The composition of rotations is not commutative, but when they are infinitesimal rotations the first order approximation of the previous series can be taken and

Given a rotating frame composed by three unitary vectors, all the three must have the same angular speed in any instant. In such a frame each vector is a particular case of the previous case (moving particle), in which the module of the vector is constant.

Angular velocity vector for a frame

It is defined as the angular velocity of each of the vectors of the frame, in a consistent way with the general definition.

Any transversal section of a plane perpendicular to this axis has to behave as a two dimensional rotation. Thus, the magnitude of the angular velocity vector at a given time t is consistent with the two dimensions case.

Angular velocity is a vector defining an addition operation. Components can be calculated from the derivatives of the parameters defining the moving frame (Euler angles or rotation matrices) 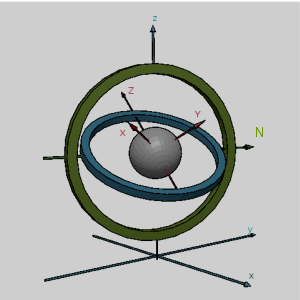 As in the general case, addition is commutative

Components from the vectors of the frame

Substituting in the expression

any vector e of the frame we obtain

As the columns of the matrix of the frame are the components of its vectors, this allows also to calculate

from the matrix of the frame and its derivative.

Euler proved that the projections of the angular velocity pseudovector over these three axes was the derivative of its associated angle (which is equivalent to decompose the instant rotation in three instantaneous Euler rotations). Therefore:[2]

This basis is not orthonormal and it is difficult to use, but now the velocity vector can be changed to the fixed frame or to the moving frame with just a change of bases. For example, changing to the mobile frame:

where IJK are unit vectors for the frame fixed in the moving body. This example has been made using the Z-X-Z convention for Euler angles.[3]

The components of the angular velocity vector can be calculated from infinitesimal rotations (if available) as follows:

It can be introduced from rotation matrices. Any vector

that rotates around an axis with an angular speed vector

(as defined before) satisfies:

This tensor W(t) will act as if it were a

Given the orientation matrix A(t) of a frame, we can obtain its instant angular velocity tensor W as follows. We know that:

And therefore the angular velocity tensor we are looking for is:

In general, the angular velocity in an n-dimensional space is the time derivative of the angular displacement tensor which is a second rank skew-symmetric tensor.

This tensor W will have n(n-1)/2 independent components and this number is the dimension of the Lie algebra of the Lie group of rotations of an n-dimensional inner product space.[4]

. This can be read as a differential equation that defines A(t) knowing W(t).

And if the angular speed is constant then W is also constant and the equation can be integrated. The result is:

which shows a connection with the Lie group of rotations.

To prove it we start taking the time derivative of

being R(t) a rotation matrix:

because R(t) is a rotation matrix

Thus, W is the negative of its transpose, which implies it is a skew symmetric matrix.

Duality with respect to the velocity vector

The tensor is a matrix with this structure:

, the angular velocity tensor represents a linear map between the position vectors

and their velocity vectors

of a rigid body rotating around the origin:

where we omitted the

as elements of the same 3-dimensional Euclidean vector space

The relation between this linear map and the angular velocity pseudovector

Because of W is the derivative of an orthogonal transformation, the

stands for the scalar product). So we can apply the fact of exterior algebra that there is a unique linear form

is the wedge product of

Taking the dual vector L* of L we get

, as the Hodge dual of L*, and apply further Hodge dual identities we arrive at

is an arbitrary vector, from nondegeneracy of scalar product follows

Angular velocity as a vector field 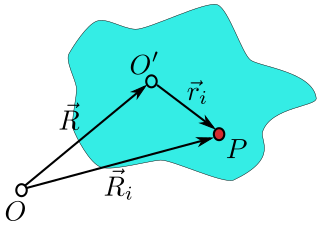 The same equations for the angular speed can be obtained reasoning over a rotating rigid body. Here is not assumed that the rigid body rotates around the origin. Instead it can be supposed rotating around an arbitrary point which is moving with a linear velocity V(t) in each instant.

To obtain the equations it is convenient to imagine a rigid body attached to the frames and consider a coordinate system that is fixed with respect to the rigid body. Then we will study the coordinate transformations between this coordinate and the fixed "laboratory" system.

is unchanging. By Euler's rotation theorem, we may replace the vector

is a 3x3 rotation matrix and

is the position of the particle at some fixed point in time, say t=0. This replacement is useful, because now it is only the rotation matrix

which is changing in time and not the reference vector

, as the rigid body rotates about point O'. Also, since the three columns of the rotation matrix represent the three versors of a reference frame rotating together with the rigid body, any rotation about any axis becomes now visible, while the vector

would not rotate if the rotation axis were parallel to it, and hence it would only describe a rotation about an axis perpendicular to it (i.e., it would not see the component of the angular velocity pseudovector parallel to it, and would only allow the computation of the component perpendicular to it). The position of the particle is now written as:

Taking the time derivative yields the velocity of the particle:

is a rotation matrix its inverse is its transpose. So we substitute

is the previous angular velocity tensor.

It can be proved that this is a skew symmetric matrix, so we can take its dual to get a 3 dimensional pseudovector which is precisely the previous angular velocity vector

Substituting ω for W into the above velocity expression, and replacing matrix multiplication by an equivalent cross product: 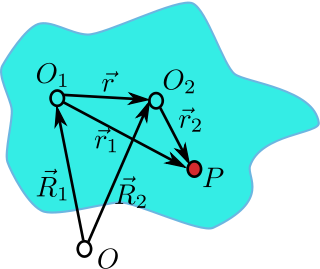 Proving the independence of angular velocity from choice of origin

See the graph to the right: The origin of lab frame is O, while O1 and O2 are two fixed points on the rigid body, whose velocity is

respectively. Suppose the angular velocity with respect to O1 and O2 is

respectively. Since point P and O2 have only one velocity,

The above two yields that

Since the point P (and thus

) is arbitrary, it follows that

When preparing electronic documents, some document editing software will attempt to use the Symbol typeface to render the ω character. Where the font is not supported, a w is displayed instead ("v=rw" instead of "v=rω", for instance). As w represents weight, not angular velocity, this can lead to confusion.