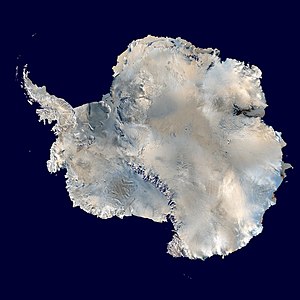 A satellite composite image of Antarctica.

The Antarctic Treaty and related agreements, collectively called the Antarctic Treaty System (ATS), regulate international relations with respect to Antarctica, Earth's only continent without a native human population. For the purposes of the treaty system, Antarctica is defined as all of the land and ice shelves south of 60°S latitude. The treaty, entering into force in 1961 and currently having 50 signatory nations, sets aside Antarctica as a scientific preserve, establishes freedom of scientific investigation and bans military activity on that continent. The treaty was the first arms control agreement established during the Cold War. The Antarctic Treaty Secretariat headquarters have been located in Buenos Aires, Argentina, since September 2004.[1]

The main treaty was opened for signature on December 1, 1959,[2] and officially entered into force on June 23, 1961.[3] The original signatories were the 12 countries active in Antarctica during the International Geophysical Year (IGY) of 1957–58. The twelve countries had significant interests in Antarctica at the time: Argentina, Australia, Belgium, Chile, France, Japan, New Zealand, Norway, South Africa, the Soviet Union, the United Kingdom and the United States.[2] These countries had established over 50 Antarctic stations for the IGY. The treaty was a diplomatic expression of the operational and scientific cooperation that had been achieved "on the ice".

Articles of the Antarctic Treaty

The main objective of the ATS is to ensure in the interests of all humankind that Antarctica shall continue forever to be used exclusively for peaceful purposes and shall not become the scene or object of international discord. Pursuant to Article 1, the treaty forbids any measures of a military nature, but not the presence of military personnel or equipment for the purposes of scientific research. 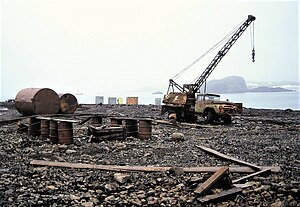 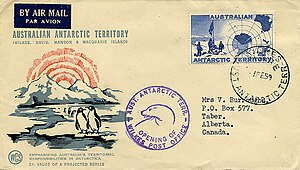 This 1959 cover commemorated the opening of the Wilkes post office in the Australian Antarctic Territory.

Other agreements — some 200 recommendations adopted at treaty consultative meetings and ratified by governments — include:

The Antarctic Treaty System's yearly Antarctic Treaty Consultative Meetings (ATCM) are the international forum for the administration and management of the region. Only 28 of the 49 parties to the agreements have the right to participate in decision-making at these meetings, though the other 21 are still allowed to attend. The decision-making participants are the Consultative Parties and, in addition to the 12 original signatories, include 16 countries that have demonstrated their interest in Antarctica by carrying out substantial scientific activity there.[4]

Note: The table can be sorted alphabetically or chronologically using the

As of 2013, there are 50 treaty member nations: 28 consultative and 22 acceding. Consultative (voting) members include the seven nations that claim portions of Antarctica as national territory. The 43 non-claimant nations either do not recognize the claims of others, or have not stated their positions.

{{#invoke:main|main}} The Antarctic Treaty Secretariat was established in Buenos Aires, Argentina in September 2004 by the Antarctic Treaty Consultative Meeting (ATCM). Jan Huber (Netherlands) served as the first Executive Secretary for five years until August 31, 2009. He was succeeded on September 1, 2009 by Manfred Reinke (Germany), appointed for a four-year term.

The tasks of the Antarctic Treaty Secretariat can be divided into the following areas:

Antarctica has no permanent population and therefore it has no citizenship nor government. All personnel present on Antarctica at any time are citizens or nationals of some sovereignty outside of Antarctica, as there is no Antarctic sovereignty. The majority of Antarctica is claimed by one or more countries, but most countries do not explicitly recognize those claims. The area on the mainland between 90 degrees west and 150 degrees west, combined with the interior of the Norwegian Sector (the extent of which has never been officially defined){{ safesubst:#invoke:Unsubst||date=__DATE__ |$B= {{#invoke:Category handler|main}}{{#invoke:Category handler|main}}[citation needed] }}, is the only major land on Earth not claimed by any country.[7] The Treaty prohibits any nation from claiming this area.

Governments that are party to the Antarctic Treaty and its Protocol on Environmental Protection implement the articles of these agreements, and decisions taken under them, through national laws. These laws generally apply only to their own citizens, wherever they are in Antarctica, and serve to enforce the consensus decisions of the consultative parties: about which activities are acceptable, which areas require permits to enter, what processes of environmental impact assessment must precede activities, and so on. The Antarctic Treaty is often considered to represent an example of the Common heritage of mankind principle.[8]

According to Argentine regulations, any crime committed within 50 kilometers of any Argentine base is to be judged in Ushuaia (as capital of Tierra del Fuego, Antarctica, and South Atlantic Islands). In the part of Argentine Antarctica that is also claimed by Chile and UK, the person to be judged can ask to be transferred there.{{ safesubst:#invoke:Unsubst||date=__DATE__ |$B= {{#invoke:Category handler|main}}{{#invoke:Category handler|main}}[citation needed] }}

The law of the United States, including certain criminal offenses by or against U.S. nationals, such as murder, may apply to areas not under jurisdiction of other countries. To this end, the United States now stations special deputy U.S. Marshals in Antarctica to provide a law enforcement presence.[10]

Some U.S. laws directly apply to Antarctica. For example, the Antarctic Conservation Act, Public Law 95-541, 16 U.S.C. § 2401 et seq., provides civil and criminal penalties for the following activities, unless authorized by regulation or statute:

In 2006, the New Zealand police reported that jurisdictional issues prevented them issuing warrants for potential American witnesses who were reluctant to testify during the Christchurch Coroner's investigation into the death by poisoning of Australian astrophysicist Rodney Marks at the South Pole base in May 2000.[11][12] Dr. Marks died while wintering over at the United States' Amundsen–Scott South Pole Station located at the geographic South Pole. Prior to autopsy, the death was attributed to natural causes by the National Science Foundation and the contractor administering the base. However, an autopsy in New Zealand revealed that Dr. Marks died from methanol poisoning. The New Zealand Police launched an investigation. In 2006, frustrated by lack of progress, the Christchurch Coroner said that it was unlikely that Dr. Marks ingested the methanol knowingly, although there is no certainty that he died as the direct result of the act of another person. During media interviews, the police detective in charge of the investigation criticized the National Science Foundation and contractor Raytheon for failing to co-operate with the investigation.[13][14][15] 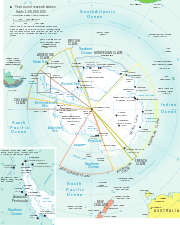 Map of research stations and territorial claims in Antarctica (2002)