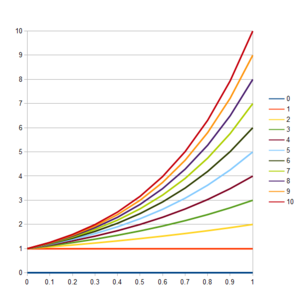 In exponentiation, the base is the number b in an expression of the form bn.

The number n is called the exponent and the expression is known formally as exponentiation of b by n or the exponential of n with base b. It is more commonly expressed as "the nth power of b", "b to the nth power" or "b to the power n". For example, the fourth power of 10 is 10,000 because 104 = 10 x 10 x 10 x 10 = 10,000. The term power strictly refers to the entire expression, but is sometimes used to refer to the exponent.

The inverse function to exponentiation with base b (when it is well-defined) is called the logarithm to base b, denoted logb. Thus: