The same vector can be represented in two different bases (purple and red arrows).

Basis vector redirects here. For basis vector in the context of crystals, see crystal structure. For a more general concept in physics, see frame of reference.

Given a basis of a vector space V, every element of V can be expressed uniquely as a linear combination of basis vectors, whose coefficients are referred to as vector coordinates or components. A vector space can have many different sets of basis vectors, however each set has the same number of elements, which defines the dimension of the vector space. 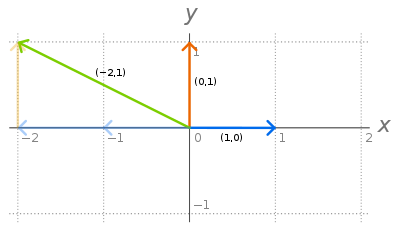 This picture illustrates the standard basis in R2. The blue and orange vectors are the elements of the basis; the green vector can be given in terms of the basis vectors, and so is linearly dependent upon them.

A basis B of a vector space V over a field F is a linearly independent subset of V that spans V.

In more detail, suppose that B = { v1, …, vn } is a finite subset of a vector space V over a field F (such as the real or complex numbers R or C). Then B is a basis if it satisfies the following conditions:

The numbers ai are called the coordinates of the vector x with respect to the basis B, and by the first property they are uniquely determined.

The sums in the above definition are all finite because without additional structure the axioms of a vector space do not permit us to meaningfully speak about an infinite sum of vectors. Settings that permit infinite linear combinations allow alternative definitions of the basis concept: see Related notions below.

It is often convenient to list the basis vectors in a specific order, for example, when considering the transformation matrix of a linear map with respect to a basis. We then speak of an ordered basis, which we define to be a sequence (rather than a set) of linearly independent vectors that span V: see Ordered bases and coordinates below.

Expression of a basis 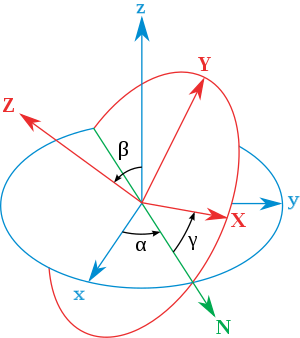 The general case is to give a matrix with the components of the new basis vectors in columns. This is also the more general method because it can express any possible set of vectors even if it is not a basis. This matrix can be seen as three things:

Basis Matrix: Is a matrix that represents the basis, because its columns are the components of vectors of the basis. This matrix represents any vector of the new basis as linear combination of the current basis.

Change of basis matrix: This matrix can be used to change different objects of the space to the new basis. Therefore is called "change of basis" matrix. It is important to note that some objects change their components with this matrix and some others, like vectors, with its inverse.

Again, B denotes a subset of a vector space V. Then, B is a basis if and only if any of the following equivalent conditions are met:

Also many vector sets can be attributed a standard basis which comprises both spanning and linearly independent vectors.

Extending to a basis

Let S be a subset of a vector space V. To extend S to a basis means to find a basis B that contains S as a subset. This can be done if and only if S is linearly independent. Almost always, there is more than one such B, except in rather special circumstances (i.e. S is already a basis, or S is empty and V has two elements).

A similar question is when does a subset S contain a basis. This occurs if and only if S spans V. In this case, S will usually contain several different bases.

Often, a mathematical result can be proven in more than one way. Here, using three different proofs, we show that the vectors (1,1) and (−1,2) form a basis for R2.

From the definition of basis

We have to prove that these two vectors are linearly independent and that they generate R2.

Part I: If two vectors v,w are linearly independent, then

(a and b scalars) implies

To prove that they are linearly independent, suppose that there are numbers a,b such that:

(i.e., they are linearly dependent). Then:

Subtracting the first equation from the second, we obtain:

Hence we have linear independence.

Part II: To prove that these two vectors generate R2, we have to let (a,b) be an arbitrary element of R2, and show that there exist numbers r,s ∈ R such that:

Then we have to solve the equations:

Subtracting the first equation from the second, we get:

By the dimension theorem

Since (−1,2) is clearly not a multiple of (1,1) and since (1,1) is not the zero vector, these two vectors are linearly independent. Since the dimension of R2 is 2, the two vectors already form a basis of R2 without needing any extension.

By the invertible matrix theorem

Since the above matrix has a nonzero determinant, its columns form a basis of R2. See: invertible matrix.

A basis is just a linearly independent set of vectors with or without a given ordering. For many purposes it is convenient to work with an ordered basis. For example, when working with a coordinate representation of a vector it is customary to speak of the "first" or "second" coordinate, which makes sense only if an ordering is specified for the basis. For finite-dimensional vector spaces one typically indexes a basis {vi} by the first n integers. An ordered basis is also called a frame.

Suppose V is an n-dimensional vector space over a field F. A choice of an ordered basis for V is equivalent to a choice of a linear isomorphism φ from the coordinate space Fn to V.

Proof. The proof makes use of the fact that the standard basis of Fn is an ordered basis.

is a linear isomorphism. Define an ordered basis {vi} for V by

where {ei} is the standard basis for Fn.

Conversely, given an ordered basis, consider the map defined by

These two constructions are clearly inverse to each other. Thus ordered bases for V are in 1-1 correspondence with linear isomorphisms Fn → V.

The maps sending a vector v to the components aj(v) are linear maps from V to F, because of φ−1 is linear. Hence they are linear functionals. They form a basis for the dual space of V, called the dual basis.

In the context of infinite-dimensional vector spaces over the real or complex numbers, the term Hamel basis (named after Georg Hamel) or algebraic basis can be used to refer to a basis as defined in this article. This is to make a distinction with other notions of "basis" that exist when infinite-dimensional vector spaces are endowed with extra structure. The most important alternatives are orthogonal bases on Hilbert spaces, Schauder bases and Markushevich bases on normed linear spaces. The term Hamel basis is also commonly used to mean a basis for the real numbers R as a vector space over the field Q of rational numbers. (In this case, the dimension of R over Q is uncountable, specifically the continuum, the cardinal number 2ℵ0.)

The common feature of the other notions is that they permit the taking of infinite linear combinations of the basic vectors in order to generate the space. This, of course, requires that infinite sums are meaningfully defined on these spaces, as is the case for topological vector spaces – a large class of vector spaces including e.g. Hilbert spaces, Banach spaces or Fréchet spaces.

, the space of the sequences

of real numbers which have only finitely many non-zero elements, with the norm

Its standard basis, consisting of the sequences having only one non-zero element, which is equal to 1, is a countable Hamel basis.

for suitable (real or complex) coefficients ak, bk. But most square-integrable functions cannot be represented as finite linear combinations of these basis functions, which therefore do not comprise a Hamel basis. Every Hamel basis of this space is much bigger than this merely countably infinite set of functions. Hamel bases of spaces of this kind are typically not useful, whereas orthonormal bases of these spaces are essential in Fourier analysis.

points in general linear position), Template:Visible anchor (essentially the same as an affine basis, this is

Proof that every vector space has a basis

Note that if V = {0}, then the empty set is a basis for V. Now we consider the case where V contains at least one nonzero element, say v.

Define the set X as all linear independent subsets of V. Note that since V contains the nonzero element v, the singleton subset L = {v} of V is necessarily linearly independent.

Hence the set X contains at least the subset L = {v}, and so X is nonempty.

We now note that if Y is a subset of X that is totally ordered by ≤, then the union LY of all the elements of Y (which are themselves certain subsets of V) is an upper bound for Y. To show this, it is necessary to verify both that a) LY belongs to X, and that b) every element L of Y satisfies L ≤ LY. Both a) and b) are easy to check.

Now we apply Zorn's lemma, which asserts that because X is nonempty, and every totally ordered subset of the partially ordered set (X, ≤) has an upper bound, it follows that X has a maximal element. (In other words, there exists some element Lmax of X satisfying the condition that whenever Lmax ≤ L for some element L of X, then L = Lmax.)

Now suppose Lmax does not span V. Then there exists some vector w of V that cannot be expressed as a linearly combination of elements of Lmax (with coefficients in the field F). Note that such a vector w cannot be an element of Lmax.

Now consider the subset Lw of V defined by Lw = Lmax ∪ {w}. It is easy to see that a) Lmax ≤ Lw (since Lmax is a subset of Lw), and that b) Lmax ≠ Lw (because Lw contains the vector w that is not contained in Lmax).

But the combination of a) and b) above contradict the fact that Lmax is a maximal element of X, which we have already proved. This contradiction shows that the assumption that Lmax does not span V was not true.

Hence Lmax does span V. Since we also know that Lmax is linearly independent over the field F, this verifies that Lmax is a basis for V. Which proves that the arbitrary vector space V has a basis.