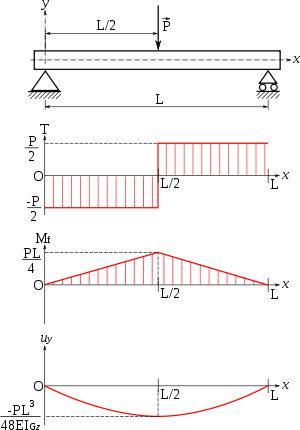 Hinged beam with a central load: diagrams of the shearing force T, the bending moment Mf and the deflection uy; the stresses are calculated at the right of the cut.

A bending moment is a measure of the average internal stress induced in a structural element when an external force or moment is applied to the element causing the element to bend.[1][2]

The internal stresses in a cross-section of a structural element can be resolved into a resultant force and a resultant couple. For equilibrium, the moment created by external forces (and external moments) must be balanced by the couple induced by the internal stresses. The resultant internal couple is called the bending moment while the resultant internal force is called the shear force (if it is transverse to the plane of element) or the normal force (if it is along the plane of the element).

Moments and torques are measured as a force multiplied by a distance so they have as unit newton-metres (N·m), or pound-foot or foot-pound (ft·lb). The concept of bending moment is very important in engineering (particularly in civil and mechanical engineering) and physics.

Tensile and compressive stresses increase proportionally with bending moment, but are also dependent on the second moment of area of the cross-section of the structural element. Failure in bending will occur when the bending moment is sufficient to induce tensile stresses greater than the yield stress of the material throughout the entire cross-section. It is possible that failure of a structural element in shear may occur before failure in bending, however the mechanics of failure in shear and in bending are different.

Moments are calculated by multiplying the external vector forces (loads or reactions) by the vector distance at which they are applied. When analysing an entire element, it is sensible to calculate moments at both ends of the element, at the beginning, centre and end of any uniformly distributed loads, and directly underneath any point loads. Of course any "pin-joints" within a structure allow free rotation, and so zero moment occurs at these points as there is no way of transmitting turning forces from one side to the other.

It is more common to use the convention that a clockwise bending moment to the left of the point under consideration is taken as positive. This then corresponds to the second derivative of a function which, when positive, indicates a curvature that is 'lower at the centre' i.e. sagging. When defining moments and curvatures in this way calculus can be more readily used to find slopes and deflections.

Critical values within the beam are most commonly annotated using a bending moment diagram, where negative moments are plotted to scale above a horizontal line and positive below. Bending moment varies linearly over unloaded sections, and parabolically over uniformly loaded sections.

Computing the moment of force 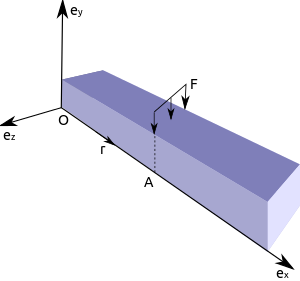 Computing the moment of force in a beam.

An important part of determining bending moments in practical problems is the computation of moments of force. Let

be a force vector acting at a point A in a body. The moment of this force about a reference point (O) is defined as[2]

is the moment vector and

is the position vector from the reference point (O) to the point of application of the force (A). The

symbol indicates the vector cross product. For many problems, it is more convenient to compute the moment of force about an axis that passes through the reference point O. If the unit vector along the axis is

, the moment of force about the axis is defined as

. If the coordinate system is defined by the three unit vectors

, we have the following

The moment about the axis

The negative value suggests that a moment that tends to rotate a body clockwise around an axis should have a negative sign. However, the actual sign depends on the choice of the three axes

. For instance, if we choose another right handed coordinate system with

For this new choice of axes, a positive moment tends to rotate body clockwise around an axis.

Expanding this expression we have,

We define the bending moment components as 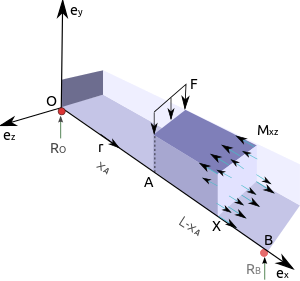 Computing the bending moment in a beam.

In the beam shown in the adjacent figure, the external forces are the applied force at point A (

) and the reactions at the two support points O and B (

). The reactions can be computed using balances of forces and moments about point A, i.e.,

is the length of the beam, we have

If we solve for the reactions we have

Looking at the free body diagram of the part of the beam to the left of point X, the total moment of the external forces about the point X is

If we compute the cross products, we have

For this situation, the only non-zero component of the bending moment is

For the sum of the moments at X about the axis

to be zero, we require

and let the bottom of the beam have a stress

. Then the stress distribution in the beam is

. The bending moment due to these stresses is

is the area moment of inertia of the cross-section of the beam. Therefore the bending moment is positive when the top of the beam is in compression.

Many authors follow a different convention in which the stress resultant

In that case, positive bending moments imply that the top of the beam is in tension. Of course, the definition of top depends on the coordinate system being used. In the examples above, the top is the location with the largest