with n and k as in Pascal's triangle

In general, if the random variable X follows the binomial distribution with parameters n and p, we write X ~ B(n, p). The probability of getting exactly k successes in n trials is given by the probability mass function:

is the binomial coefficient, hence the name of the distribution. The formula can be understood as follows: we want exactly k successes (pk) and n − k failures (1 − p)n − k. However, the k successes can occur anywhere among the n trials, and there are

different ways of distributing k successes in a sequence of n trials.

In creating reference tables for binomial distribution probability, usually the table is filled in up to n/2 values. This is because for k > n/2, the probability can be calculated by its complement as

Looking at the expression ƒ(k, n, p) as a function of k, there is a k value that maximizes it. This k value can be found by calculating

and comparing it to 1. There is always an integer M that satisfies

ƒ(k, n, p) is monotone increasing for k < M and monotone decreasing for k > M, with the exception of the case where (n + 1)p is an integer. In this case, there are two values for which ƒ is maximal: (n + 1)p and (n + 1)p − 1. M is the most probable (most likely) outcome of the Bernoulli trials and is called the mode. Note that the probability of it occurring can be fairly small.

The cumulative distribution function can be expressed as:

is the "floor" under k, i.e. the greatest integer less than or equal to k.

It can also be represented in terms of the regularized incomplete beta function, as follows:[1]

Some closed-form bounds for the cumulative distribution function are given below.

Suppose a biased coin comes up heads with probability 0.3 when tossed. What is the probability of achieving 0, 1,..., 6 heads after six tosses?

If X ~ B(n, p), that is, X is a binomially distributed random variable, n being the total number of experiments and p the probability of each experiment yielding a successful result, then the expected value of X is

Usually the mode of a binomial B(n, p) distribution is equal to

In general, there is no single formula to find the median for a binomial distribution, and it may even be non-unique. However several special results have been established:

If two binomially distributed random variables X and Y are observed together, estimating their covariance can be useful. Using the definition of covariance, in the case n = 1 (thus being Bernoulli trials) we have

The first term is non-zero only when both X and Y are one, and μX and μY are equal to the two probabilities. Defining pB as the probability of both happening at the same time, this gives

and for n independent pairwise trials

If X and Y are the same variable, this reduces to the variance formula given above. 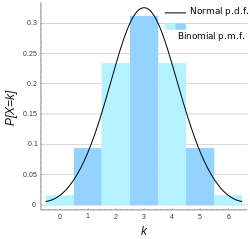 If n is large enough, then the skew of the distribution is not too great. In this case a reasonable approximation to B(n, p) is given by the normal distribution

and this basic approximation can be improved in a simple way by using a suitable continuity correction. The basic approximation generally improves as n increases (at least 20) and is better when p is not near to 0 or 1.[7] Various rules of thumb may be used to decide whether n is large enough, and p is far enough from the extremes of zero or one:

This approximation, known as de Moivre–Laplace theorem, is a huge time-saver when undertaking calculations by hand (exact calculations with large n are very onerous); historically, it was the first use of the normal distribution, introduced in Abraham de Moivre's book The Doctrine of Chances in 1738. Nowadays, it can be seen as a consequence of the central limit theorem since B(n, p) is a sum of n independent, identically distributed Bernoulli variables with parameter p. This fact is the basis of a hypothesis test, a "proportion z-test", for the value of p using x/n, the sample proportion and estimator of p, in a common test statistic.[8]

For example, suppose one randomly samples n people out of a large population and ask them whether they agree with a certain statement. The proportion of people who agree will of course depend on the sample. If groups of n people were sampled repeatedly and truly randomly, the proportions would follow an approximate normal distribution with mean equal to the true proportion p of agreement in the population and with standard deviation σ = (p(1 − p)/n)1/2. Large sample sizes n are good because the standard deviation, as a proportion of the expected value, gets smaller, which allows a more precise estimate of the unknown parameter p.

approaches the normal distribution with expected value 0 and variance 1.{{ safesubst:#invoke:Unsubst||date=__DATE__ |$B=

Even for quite large values of n, the actual distribution of the mean is significantly nonnormal.[11] Because of this problem several methods to estimate confidence intervals have been proposed.

Let n1 be the number of successes out of n, the total number of trials, and let

be the proportion of successes. Let zα/2 be the 100(1 − α/2)th percentile of the standard normal distribution.

A continuity correction of 0.5/n may be added.Template:Clarify

Here the estimate of p is modified to

The exact (Clopper-Pearson) method is the most conservative.[11] The Wald method although commonly recommended in the text books is the most biased.Template:Clarify

One way to generate random samples from a binomial distribution is to use an inversion algorithm. To do so, one must calculate the probability that P(X=k) for all values k from 0 through n. (These probabilities should sum to a value close to one, in order to encompass the entire sample space.) Then by using a Linear congruential generator to generate samples uniform between 0 and 1, one can transform the calculated samples U[0,1] into discrete numbers by using the probabilities calculated in step one.

For k ≤ np, upper bounds for the lower tail of the distribution function can be derived. In particular, Hoeffding's inequality yields the bound

and Chernoff's inequality can be used to derive the bound

Moreover, these bounds are reasonably tight when p = 1/2, since the following expression holds for all k ≥ 3n/8[17]

However, the bounds do not work well for extreme values of p. In particular, as p

1, value F(k;n,p) goes to zero (for fixed k, n with k<n) while the upper bound above goes to a positive constant. In this case a better bound is given by [18]

where D(a|| p) is the relative entropy between an a-coin and a p-coin (i.e. between the Bernoulli(a) and Bernoulli(p) distribution):

Asymptotically, this bound is reasonably tight; see [18] for details. An equivalent formulation of the bound is

Both these bounds are derived directly from the Chernoff bound. It can also be shown that,

This is proved using the method of types (see for example chapter 12 of Elements of Information Theory by Cover and Thomas [19]).