File:Flickr - Official U.S. Navy Imagery - Sailors play board games with children at the Cameron Community Ministries during Rochester Navy Week.jpg
The modern American board game Monopoly is licensed in 103 countries and printed in 37 languages. 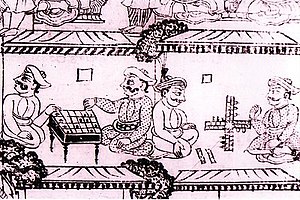 Men Playing Board Games, from The Sougandhika Parinaya Manuscript (1821 CE)

A board game is a game that involves counters or pieces moved or placed on a pre-marked surface or "board", according to a set of rules. Games can be based on pure strategy, chance (e.g. rolling dice), or a mixture of the two, and usually have a goal that a player aims to achieve. Early board games represented a battle between two armies, and most current board games are still based on defeating opposing players in terms of counters, winning position, or accrual of points (often expressed as in-game currency).

There are many different types and styles of board games. Their representation of real-life situations can range from having no inherent theme (e.g. checkers), to having a specific theme and narrative (e.g. Cluedo). Rules can range from the very simple (e.g. Tic-tac-toe) to those describing a game universe in great detail (e.g. Dungeons & Dragons) Template:Ndash although most of the latter are role-playing games where the board is secondary to the game, serving to help visualize the game scenario.

The amount of time required to learn to play or master a game varies greatly from game to game. Learning time does not necessarily correlate with the number or complexity of rules; some games having profound strategies (e.g. chess or Go) possess relatively simple rulesets. 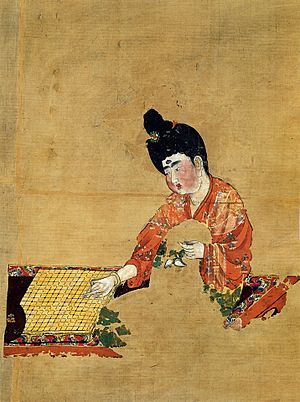 Board games have been played in most cultures and societies throughout history; some even pre-date literacy skill development in the earliest civilizations.{{ safesubst:#invoke:Unsubst||date=__DATE__ |$B= {{#invoke:Category handler|main}}{{#invoke:Category handler|main}}[citation needed] }} A number of important historical sites, artifacts, and documents shed light on early board games. These include:

Pachisi variant being played on a Ludo board in Nepal

Around the year 2000 the board gaming industry began to grow with companies such as Fantasy Flight Games, Z-Man Games, or Indie Boards and Cards, churning out new games which are being sold to a growing (and slightly massive) audience worldwide.[14]

In seventeenth and eighteenth century colonial America, the agrarian life of the country left little time for game playing though draughts (checkers), bowling, and card games were not unknown. The Pilgrims and Puritans of New England frowned on game playing and viewed dice as instruments of the devil. When the Governor William Bradford discovered a group of non-Puritans playing stool-ball, pitching the bar, and pursuing other sports in the streets on Christmas Day, 1622, he confiscated their implements, reprimanded them, and told them their devotion for the day should be confined to their homes. 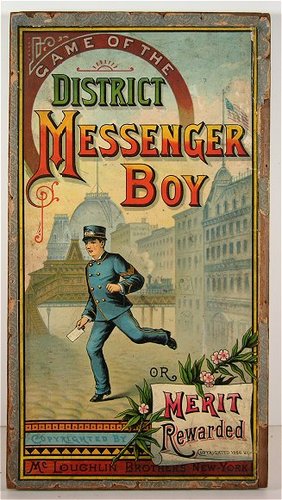 Game of the District Messenger Boy (1886) was one of the first board games based on materialism and capitalism published in the United States.

Almost all these pursuits of chance [i.e., of human industry] produce something useful to society. But there are some which produce nothing, and endanger the well-being of the individuals engaged in them or of others depending on them. Such are games with cards, dice, billiards, etc. And although the pursuit of them is a matter of natural right, yet society, perceiving the irresistible bent of some of its members to pursue them, and the ruin produced by them to the families depending on these individuals, consider it as a case of insanity, quoad hoc, step in to protect the family and the party himself, as in other cases of insanity, infancy, imbecility, etc., and suppress the pursuit altogether, and the natural right of following it. There are some other games of chance, useful on certain occasions, and injurious only when carried beyond their useful bounds. Such are insurances, lotteries, raffles, etc. These they do not suppress, but take their regulation under their own discretion.

As the United States shifted from agrarian to urban living in the nineteenth century, greater leisure time and a rise in income became available to the middles class. The American home, once the center of economic production, became the locus of entertainment, enlightenment, and education under the supervision of mothers. Children were encouraged to play board games that developed literacy skills and provided moral instruction.[15]

The earliest board games published in the United States were based upon Christian morality. The Mansion of Happiness (1843), for example, sent players along a path of virtues and vices that led to the Mansion of Happiness (Heaven).[15] The Game of Pope or Pagan, or The Siege of the Stronghold of Satan by the Christian Army (1844) pitted an image on its board of a Hindu woman committing suttee against missionaries landing on a foreign shore. The missionaries are cast in white as "the symbol of innocence, temperance, and hope" while the pope and pagan are cast in black, the color of "gloom of error, and...grief at the daily loss of empire".[16]

Commercially produced board games in the middle nineteenth century were monochrome prints laboriously hand-colored by teams of low paid young factory women. Advances in paper making and printmaking during the period enabled the commercial production of relatively inexpensive board games. The most significant advance was the development of chromolithography, a technological achievement that made bold, richly colored images available at affordable prices. Games cost as little as US$.25 for a small boxed card game to $3.00 for more elaborate games.

American Protestants believed a virtuous life led to success, but the belief was challenged mid-century when Americans embraced materialism and capitalism. The accumulation of material goods was viewed as a divine blessing. In 1860, The Checkered Game of Life rewarded players for mundane activities such as attending college, marrying, and getting rich. Daily life rather than eternal life became the focus of board games.The game was the first to focus on secular virtues rather than religious virtues,[15] and sold 40,000 copies its first year.[17]

Game of the District Messenger Boy, or Merit Rewarded is a board game published in 1886 by the New York City firm of McLoughlin Brothers. The game is a typical roll-and-move track board game. Players move their tokens along the track at the spin of the arrow toward the goal at track's end. Some spaces on the track will advance the player while others will send him back.

In the affluent 1880s, Americans witnessed the publication of Algeresque rags to riches games that permitted players to emulate the capitalist heroes of the age. One of the first such games, The Game of the District Messenger Boy, encouraged the idea that the lowliest messenger boy could ascend the corporate ladder to its topmost rung. Such games insinuated that the accumulation of wealth brought increased social status.[15] Competitive capitalistic games culminated in 1935 with Monopoly, the most commercially successful board game in United States history.[18]

McLoughlin Brothers published similar games based on the telegraph boy theme including Game of the Telegraph Boy, or Merit Rewarded (1888). Greg Downey notes in his essay, "Information Networks and Urban Spaces: The Case of the Telegraph Messenger Boy" that families who could afford the deluxe version of the game in its chromolithographed, wood-sided box would not "have sent their sons out for such a rough apprenticeship in the working world."[19]

Most board games involve both luck and strategy. But an important feature of them is the amount of randomness/luck involved, as opposed to skill. Some games, such as chess, depend almost entirely on player skill. But many children's games are mainly decided by luck: for example, Candy Land and Chutes and Ladders require no decisions by the players. A player may be hampered by a few poor rolls of the dice in backgammon, Risk, Monopoly, or cribbage, but over many games a skilled player will win more often. While some purists consider luck to be an undesirable component of a game, others counter that elements of luck can make for far more diverse and multi-faceted strategies, as concepts such as expected value and risk management must be considered.

The modern German board game The Settlers of Catan is printed in 30 languages and sold 15 million by 2009.

A second aspect is the game information available to players. Some games (chess being a classic example) are perfect information games: each player has complete information on the state of the game. In other games, such as Tigris and Euphrates or Stratego, some information is hidden from players. This makes finding the best move more difficult, and may involve estimating probabilities by the opponents.

Another important aspect of some games is diplomacy, that is, players making deals with one another. Two-player games usually do not involve diplomacy (cooperative games being the exception). Thus, negotiation generally features only in games with three or more players. An important facet of The Settlers of Catan, for example, is convincing players to trade with you rather than with opponents. In Risk, two or more players may team up against others. Easy diplomacy involves convincing other players that someone else is winning and should therefore be teamed up against. Advanced diplomacy (e.g. in the aptly named game Diplomacy) consists of making elaborate plans together, with the possibility of betrayal.

Luck may be introduced into a game by a number of methods. The most common method is the use of dice, generally six-sided. These can decide everything from how many steps a player moves their token, as in Monopoly, to how their forces fare in battle, such as in Risk, or which resources a player gains, such as in The Settlers of Catan. Other games such as Sorry! use a deck of special cards that, when shuffled, create randomness. Scrabble does something similar with randomly picked letters. Other games use spinners, timers of random length, or other sources of randomness. Trivia games have a great deal of randomness based on the questions a player must answer. German-style board games are notable for often having less luck element than many North American board games.

{{#invoke:Multiple image|render}} While there has been a fair amount of scientific research on the psychology of older board games (e.g., chess, Go, mancala), less has been done on contemporary board games such as Monopoly, Scrabble, and Risk.[20] Much research has been carried out on chess, in part because many tournament players are publicly ranked in national and international lists, which makes it possible to compare their levels of expertise. The works of Adriaan de Groot, William Chase, Herbert A. Simon, and Fernand Gobet have established that knowledge, more than the ability to anticipate moves, plays an essential role in chess-playing. This seems to be the case in other traditional games such as Go and Oware (a mancala game), but data is lacking in regard to contemporary board games.{{ safesubst:#invoke:Unsubst||date=__DATE__ |$B= {{#invoke:Category handler|main}}{{#invoke:Category handler|main}}[citation needed] }}

Additionally, board games can be therapeutic. Bruce Halpenny, a games inventor said when interviewed about his game:

With crime you deal with every basic human emotion and also have enough elements to combine action with melodrama. The player’s imagination is fired as they plan to rob the train. Because of the gamble they take in the early stage of the game there is a build up of tension, which is immediately released once the train is robbed. Release of tension is therapeutic and useful in our society, because most jobs are boring and repetitive.[21]

Linearly arranged board games have been shown to improve children's spatial numerical understanding. This is because the game is similar to a number line in that they promote a linear understanding of numbers rather than the innate logarithmic one.[22]

There are a number of different categories that board games can be classified into, although considerable overlap exists, and a game may belong in several categories. The following is a list of some of the most common:

Although many board games have a jargon all their own, there is a generalized terminology to describe concepts applicable to basic game mechanics and attributes common to nearly all board games. 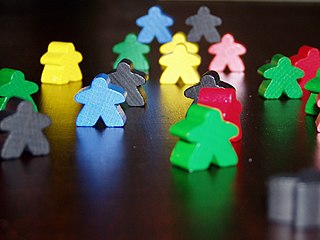 Wooden meeples from the Carcassonne board game