A set (in light blue) and its boundary (in dark blue).

In topology and mathematics in general, the boundary of a subset S of a topological space X is the set of points which can be approached both from S and from the outside of S. More precisely, it is the set of points in the closure of S, not belonging to the interior of S. An element of the boundary of S is called a boundary point of S. Notations used for boundary of a set S include bd(S), fr(S), and ∂S. Some authors (for example Willard, in General Topology) use the term frontier, instead of boundary in an attempt to avoid confusion with the concept of boundary used in algebraic topology and manifold theory. However, frontier sometimes refers to a different set, which is the set of boundary points which are not actually in the set; that is, S \ S.

There are several common (and equivalent) definitions to the boundary of a subset S of a topological space X: 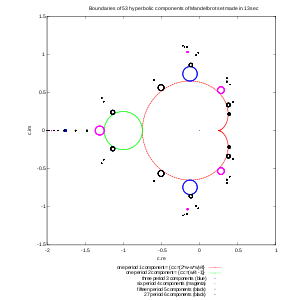 Consider the real line R with the usual topology (i.e. the topology whose basis sets are open intervals). One has

These last two examples illustrate the fact that the boundary of a dense set with empty interior is its closure.

In the space of rational numbers with the usual topology (the subspace topology of R), the boundary of

, where a is irrational, is empty.

Boundary of a boundary

For any set S, ∂S ⊇ ∂∂S, with equality holding if and only if the boundary of S has no interior points, which will be the case for example if S is either closed or open. Since the boundary of a set is closed, ∂∂S = ∂∂∂S for any set S. The boundary operator thus satisfies a weakened kind of idempotence.