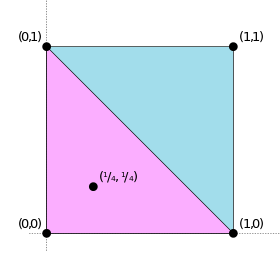 An illustration of Carathéodory's theorem for a square in R2

. The result is named for Constantin Carathéodory, who proved the theorem in 1911 for the case when P is compact. In 1914 Ernst Steinitz expanded Carathéodory's theorem for any sets P in Rd.

Let x be a point in the convex hull of P. Then, x is a convex combination of a finite number of points in P :

where every xj is in P, every λj is non-negative, and

If μ1 is defined as

and not all of the μj are equal to zero. Therefore, at least one μj > 0. Then,

for any real α. In particular, the equality will hold if α is defined as

In particular, λi − αμi = 0 by definition of α. Therefore,

is nonnegative, their sum is one , and furthermore,