García was born in Talibon, Bohol on 4 November 1896, to Policronio García and Ambrosia Polístico, who were both natives of Bangued, Abra.

García grew up with politics, with his father serving as a municipal mayor for four terms. He acquired his primary education in his native Talibon, then took his secondary education in Cebu Provincial High School, both on top of his class. Initially, he pursued his college education at Silliman University in Dumaguete City, Negros Oriental, and later studied at the Philippine Law School where he earned his law degree in 1923. He was among the top ten in the bar examination.[1]

Rather than practice law right away, he worked as a teacher for two years at Bohol Provincial High School. He became famous for his poetry in Bohol, where he earned the nickname "Prince of Visayan Poets" and the "Bard from Bohol".

García entered politics in 1925, scoring an impressive victory to become Representative of the Third District of Bohol. He was elected for another term in 1928 and served until 1931. He was elected Governor of Bohol in 1933, but served only until 1941 when he successfully ran for Senate, but he was unable to serve due to the Japanese occupation of the Philippines during the Second World War. He assumed the office when Congress re-convened in 1945 after Allied liberation and the end of the war. When he resumed duties as senator after the war, he was chosen Senate majority floor leader. [2] The press consistently voted him as one of the most outstanding senators. Simultaneously, he occupied a position in the Nacionalista Party.

Garcia refused to cooperate with the Japanese during the war. He did not surrender when he was placed on the wanted list with a price on his head. He instead took part in the guerilla activities and served as adviser in the free government organized in Bohol.

García was the running mate of Ramón Magsaysay in the 1953 presidential election in which both men won. He was appointed Secretary of Foreign Affairs by President Magsaysay, and for four years served concurrently as Vice-President.Template:Fact

As Secretary of Foreign Affairs, he opened formal reparation negotiations in an effort to end the nine-year technical state of war between Japan and the Philippines, leading to an agreement in April 1954. During the Geneva Conference of 1954 on Korean unification and other Asian problems, García, as chairman of the Philippine delegation, attacked communist promises in Asia and defended the U.S. policy in the Far East. In a speech on 7 May 1954–the day that the Viet Minh defeated French forces at the Battle of Diên Biên Phu in Vietnam– García repeated the Philippine stand for nationalism and opposition to Communism.Template:Fact

García acted as chairman of the eight-nation Southeast Asian Security Conference held in Manila in September 1954, which led to the development of the Southeast Asia Treaty Organization (SEATO).[3] 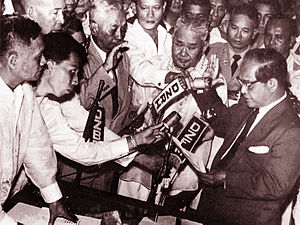 Vice-President Carlos P. García (right) was inaugurated President upon Magsaysay's death at the Council of State Room in the Executive Building of the Malacañan Palace complex. The oath of office was administered by Chief Justice Ricardo Paras.

At the time of President Magsaysay's sudden death on 17 March 1957, García was heading the Philippine delegation to the SEATO conference then being held at Canberra, Australia.[4] Having been immediately notified of the tragedy, Vice President García enplaned back for Manila. Upon his arrival he directly repaired to Malacañang Palace to assume the duties of President. Chief Justice Ricardo Paras, of the Supreme Court, was at hand to administer the oath of office. President García's first actions dealt with the declaration of a period of mourning for the whole nation and the burial ceremonies for the late Chief-Executive Magsaysay.[4]

After much discussion, both official and public, the Congress of the Philippines, finally, approved a bill outlawing the Communist Party of the Philippines. Despite the pressure exerted against the congressional measure, President Carlos P. García signed the said bill into law as Republic Act No. 1700 on 19 June 1957.[4][5]

President García exercised the Filipino First Policy, for which he was known. This policy heavily favored Filipino businessmen over foreign investor. He was also responsible for changes in retail trade which greatly affected the Chinese businessmen in the country. In a speech during a joint session of Congress on 18 September 1946, President García said the following:

In the face of the trying conditions of the country, President García initiated what has been called "The Austerity Program". His administration was characterized by its austerity program and its insistence on a comprehensive nationalist policy. On 3 March 1960, he affirmed the need for complete economic freedom and added that the government no longer would tolerate the dominance of foreign interests (especially American) in the national economy. He promised to shake off "the yoke of alien domination in business, trade, commerce and industry." García was also credited with his role in reviving Filipino cultural arts.[3] The main points of the Austerity Program were:[4]

The program was hailed[4] by the people at large and confidence was expressed that the measures proposed would help solve the standing problems of the Republic.[4]

During his administration, he acted on the Bohlen–Serrano Agreement, which shortened the lease of the American Bases from 99 years to 25 years and made it renewable after every five years.Template:Fact

{{#invoke:main|main}} At the end of his second term, he ran for re–election in the Presidential elections in November 1961, but was defeated by his Vice-President Diosdado Macapagal, who belonged to the opposing Liberal Party (the President and the Vice-President are elected separately in the country).

After his failed re–election bid, García retired to Tagbilaran to resume as a private citizen.

García became the first layman to lie in state in Manila Cathedral—a privilege until then limited to a deceased Archbishop of Manila—and the first President to be buried at the Libingan ng mga Bayani.Template:Fact