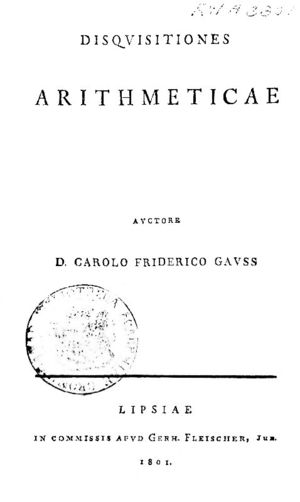 The Chinese remainder theorem was proved by Gauss with his 1801 book Disquisitiones Arithmeticae.[1]

The Chinese remainder theorem is a result about congruences in number theory and its generalizations in abstract algebra. It was first published in the 3rd to 5th centuries by the Chinese mathematician Sun Tzu.

Suppose n1, ..., nk are positive integers that are pairwise coprime. Then, for any given sequence of integers a1, ..., ak, there exists an integer Template:Mvar solving the following system of simultaneous congruences.

Furthermore, all solutions Template:Mvar of this system are congruent modulo the product, N = n1 ... nk. Hence

Sometimes, the simultaneous congruences can be solved even if the ni are not pairwise coprime. A solution Template:Mvar exists if and only if:

All solutions Template:Mvar are then congruent modulo the least common multiple of the ni.

Sun Tzu's work contains neither a proof nor a full algorithm. What amounts to an algorithm for solving this problem was described by Aryabhata (6th century; see Template:Harvnb). Special cases of the Chinese remainder theorem were also known to Brahmagupta (7th century), and appear in Fibonacci's Liber Abaci (1202).

we have the isomorphism between a ring and the direct product of its prime power parts:

The theorem can also be restated in the language of combinatorics as the fact that the infinite arithmetic progressions of integers form a Helly family Template:Harv.

The existence and uniqueness of the solution can easily be seen through a non-constructive argument:

Existence can be seen by an explicit construction of Template:Mvar. Let [a−1]b denote the multiplicative inverse of a (mod b) given by the Extended Euclidean algorithm. It is defined exactly when Template:Mvar and Template:Mvar are coprime; the following construction explains why this condition is needed.

This is true because we are using the inverses provided by the Extended Euclidean algorithm; for any other inverses, this would not necessarily be true, but still be valid (mod n1n2).

Multiplying both sides by Template:Mvar, we get

If we take the congruence modulo n1 for the right-hand-side expression, it is readily seen that

and it is seen to satisfy both congruences, for example:

The same type of construction works in the general case of Template:Mvar congruence equations. Let N = n1 ... nk be the product of every modulus then define

and this is seen to satisfy the system of congruences by a similar calculation as before.

Finding the solution with basic algebra and modular arithmetic

For example, consider the problem of finding an integer Template:Mvar such that

A brute-force approach converts these congruences into sets and writes the elements out to the product of 3×4×5 = 60 (the solutions modulo 60 for each congruence):

To find an x that satisfies all three congruences, intersect the three sets to get:

Which can be expressed as

Another way to find a solution is with basic algebra, modular arithmetic, and stepwise substitution.

Start by substituting the Template:Mvar from the first equation into the second congruence:

Substitute this Template:Mvar into the third congruence:

meaning that s = 0 + 5u for some integer Template:Mvar. Finally,

Notice that 60 = lcm(3,4,5). If the moduli are pairwise coprime (as they are in this example), the solutions will be congruent modulo their product.

A constructive algorithm to find the solution

The following algorithm only applies if the ni are pairwise coprime. (For simultaneous congruences when the moduli are not pairwise coprime, the method of successive substitution can often yield solutions.)

Suppose, as above, that a solution is required for the system of congruences:

Because of this, and the multiplication rules allowed in congruences, one solution to the system of simultaneous congruences is:

For example, consider the problem of finding an integer Template:Mvar such that

Chinese Remainder Theorem for Principal Ideal Domains. Let Template:Mvar be principal ideal domain. If u1, ..., uk are pairwise coprime elements of Template:Mvar where u = u1...uk, then the quotient ring R/uR and the product ring R/u1R × ... × R/ukR are isomorphic via the following map:

This statement is a straightforward generalization of the above theorem about integer congruences: Z is a principal ideal domain, the surjectivity of the map f shows that every system of congruences of the form

Set ei = su/ui. Then it is clear that

Thus the inverse of f is the map

The general form of the Chinese remainder theorem, which implies all the statements given above, can be formulated for commutative rings and ideals.

Chinese Remainder Theorem for Commutative Rings. If Template:Mvar is a commutative ring and I1, ..., Ik are ideals of R that are pairwise coprime (meaning Ii + Ij = R for all i ≠ j), then the product Template:Mvar of these ideals is equal to their intersection, and the quotient ring R/I is isomorphic to the product ring R/I1 × ... × R/Ik via the isomorphism

Here is a version of the theorem where R is not required to be commutative:

Chinese Remainder Theorem for Noncommutative Rings. Let Template:Mvar be any ring with 1 (not necessarily commutative) and I1, ..., Ik be pairwise coprime 2-sided ideals. Then the canonical Template:Mvar-module homomorphism R → R/I1 × ... × R/Ik is onto, with kernel I1 ∩ ... ∩ Ik. Hence,

The Chinese remainder theorem can be used to construct an elegant Gödel numbering for sequences, which is needed to prove Gödel's incompleteness theorems.

The Good-Thomas fast Fourier transform algorithm exploits a re-indexing of the data based on the Chinese remainder theorem. The Prime-factor FFT algorithm contains an implementation.

the problem may be equivalently reformulated as a system of Template:Mvar simultaneous congruences:

By the Chinese remainder theorem in the principal ideal domain C[x], there is a unique polynomial P(x) such that:

A direct construction, in analogy with the above proof for the integer number case, can be performed as follows. Define the polynomials

and the minimal degree solution is this one reduced modulo Template:Mvar, that is the unique with degree less than Template:Mvar.

Dedekind's Theorem on the Linear Independence of Characters. Let Template:Mvar be a monoid and Template:Mvar an integral domain, viewed as a monoid by considering the multiplication on Template:Mvar. Then any finite family ( fi )i∈I of distinct monoid homomorphisms  fi : M → k is linearly independent. In other words every family (αi)i∈I of elements αi ∈ k satisfying

Next, for i, j ∈ I; i ≠ j the two Template:Mvar-linear maps Fi : k[M] → k and Fj : k[M] → k are not proportional to each other. Otherwise  fi  and  fj  would also be proportional, and thus equal since as monoid homomorphisms they satisfy:  fi (1) = 1 =  fj (1), which contradicts the assumption that they are distinct.

is surjective. Under the isomorphisms k[M]/Ker Fi → Fi(k[M]) = k, the map Φ corresponds to:

for every vector (ui)i∈I in the image of the map Template:Mvar. Since Template:Mvar is surjective, this means that

is an isomorphism. Note that I1 ∩ ... ∩ Im can be replaced by a sum over all orderings of I1, ..., Im of their product (or just a sum over enough orderings, using inductively that I ∩ J = IJ + JI for coprime ideals I, J ⊂ R).