A chirp is a signal in which the frequency increases ('up-chirp') or decreases ('down-chirp') with time. In some sources, the term chirp is used interchangeably with sweep signal.[1] It has also been called quadratic-phase signal.[2] It is commonly used in sonar and radar, but has other applications, such as in spread spectrum communications. In spread spectrum usage, SAW devices such as RACs are often used to generate and demodulate the chirped signals. In optics, ultrashort laser pulses also exhibit chirp, which, in optical transmission systems interacts with the dispersion properties of the materials, increasing or decreasing total pulse dispersion as the signal propagates. The name is a reference to chirping in analogy to the sound made by some birds, see bird vocalization. 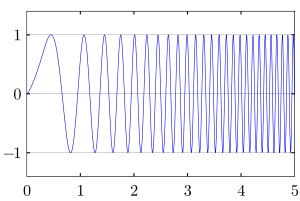 A linear chirp waveform; a sinusoidal wave that increases in frequency linearly over time 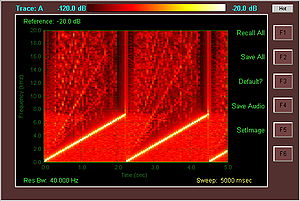 Spectrogram of a Linear Chirp. The Spectrogram plot demonstrates the linear rate of change in frequency as a function of time, in this case from 0 to 7 kHz repeating every 2.3 seconds. The intensity of the plot is proportional to the energy content in the signal at the indicated frequency and time.

In a linear chirp, the instantaneous frequency

is the starting frequency (at time

is the rate of frequency increase or chirp rate.

is the final frequency and

is the starting frequency.

The corresponding time-domain function for the phase of any oscillating signal is the integral of the frequency function, since one expects the phase to grow like

, i.e., that the derivative of the phase is the angular frequency

For the linear chirp, this results in:

is the initial phase (at time

The corresponding time-domain function for a sinusoidal linear chirp is the sine of the phase in radians:

In the frequency domain, the instantaneous frequency described by the equation

is accompanied by additional frequencies (harmonics) which exist as a fundamental consequence of frequency modulation.{{ safesubst:#invoke:Unsubst||date=__DATE__ |$B= {{#invoke:Category handler|main}}{{#invoke:Category handler|main}}[citation needed] }} These harmonics are quantifiably described through the use of Bessel functions. However, with the aid of a frequency vs. time profile spectrogram one can readily see that the linear chirp has spectral components at harmonics of the fundamental chirp.

An exponential chirp waveform; a sinusoidal wave that increases in frequency exponentially over time

Spectrogram of an exponential chirp. The exponential rate of change of frequency is shown as a function of time, in this case from nearly 0 up to 8 kHz repeating every second. Also visible in this Spectrogram is a frequency fallback to 6 kHz after peaking, likely an artifact of the specific method employed to generate the waveform.

In a geometric chirp, also called an exponential chirp, the frequency of the signal varies with a geometric relationship over time. In other words, if two points in the waveform are chosen,

, and the time interval between them

is kept constant, the frequency ratio

will also be constant.

In an exponential chirp, the frequency of the signal varies exponentially as a function of time:

is the starting frequency (at

The corresponding time-domain function for the phase of an exponential chirp is the integral of the frequency:

is the initial phase (at

The corresponding time-domain function for a sinusoidal exponential chirp is the sine of the phase in radians:

As was the case for the Linear Chirp, the instantaneous frequency of the Exponential Chirp consists of the fundamental frequency

Generation of a chirp signal

Relation to an impulse signal

Chirp and impulse signals and their (selected) spectral components.

A chirp signal shares the same spectral content with an impulse signal. However, unlike in the impulse signal, spectral components of the chirp signal have different phases,[3][4][5] i.e., their power spectra are alike but the phase spectra are distinct. Dispersion of a signal propagation medium may result in unintentional conversion of impulse signals into chirps. On the other hand, many practical applications, such as chirped pulse amplifiers or echolocation systems,[5] use chirp signals instead of impulses because of their inherently lower PAPR.

Chirp modulation, or linear frequency modulation for digital communication was patented by Sidney Darlington in 1954 with significant later work performed by Winkler in 1962. This type of modulation employs sinusoidal waveforms whose instantaneous frequency increases or decreases linearly over time. These waveforms are commonly referred to as linear chirps or simply chirps.

Hence the rate at which their frequency changes is called the chirp rate. In binary chirp modulation, binary data is transmitted by mapping the bits into chirps of opposite chirp rates. For instance, over one bit period "1" is assigned a chirp with positive rate a and "0" a chirp with negative rate −a. Chirps have been heavily used in radar applications and as a result advanced sources for transmission and matched filters for reception of linear chirps are available.

(a) In image processing, direct periodicity seldom occurs, but, rather, periodicity-in-perspective is encountered. (b) Repeating structures like the alternating dark space inside the windows, and light space of the white concrete, "chirp" (increase in frequency) towards the right. (c) Thus the best fit chirp for image processing is often a projective chirp.

Another kind of chirp is the projective chirp, of the form:

A change in frequency of Morse code from the desired frequency, due to poor stability in the RF Oscillator is known as chirp,[7] and in the RST code is given an appended letter 'C'.

then the instantaneous frequency is defined to be:

and the chirp rate is defined to be: