In mathematics, the circle group, denoted by T, is the multiplicative group of all complex numbers with absolute value 1, i.e., the unit circle in the complex plane or simply the unit complex numbers[1]

The circle group forms a subgroup of C×, the multiplicative group of all nonzero complex numbers. Since C× is abelian, it follows that T is as well. The circle group is also the group U(1) of 1×1 unitary matrices; these act on the complex plane by rotation about the origin. The circle group can be parametrized by the angle θ of rotation by

This is the exponential map for the circle group.

The circle group plays a central role in Pontryagin duality, and in the theory of Lie groups.

The notation T for the circle group stems from the fact that Tn (the direct product of T with itself n times) is geometrically an n-torus. The circle group is then a 1-torus. 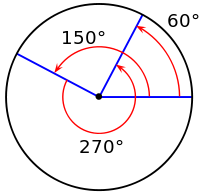 Multiplication on the circle group is equivalent to addition of angles

Another description is in terms of ordinary addition, where only numbers between 0 and 1 are allowed (with 1 corresponding to a full rotation). To achieve this, we might need to throw away digits occurring before the decimal point. For example, when we work out 0.784 + 0.925 + 0.446, the answer should be 2.155, but we throw away the leading 2, so the answer (in the circle group) is just 0.155.

The circle group shows up in a variety of forms in mathematics. We list some of the more common forms here. Specifically, we show that

The set of all 1×1 unitary matrices clearly coincides with the circle group; the unitary condition is equivalent to the condition that its element have absolute value 1. Therefore, the circle group is canonically isomorphic to U(1), the first unitary group.

The exponential function gives rise to a group homomorphism exp : R → T from the additive real numbers R to the circle group T via the map

The last equality is Euler's formula or the complex exponential. The real number θ corresponds to the angle on the unit circle as measured from the positive x-axis. That this map is a homomorphism follows from the fact that the multiplication of unit complex numbers corresponds to addition of angles:

This exponential map is clearly a surjective function from R to T. It is not, however, injective. The kernel of this map is the set of all integer multiples of 2π. By the first isomorphism theorem we then have that

After rescaling we can also say that T is isomorphic to R/Z.

The circle group is therefore isomorphic to the special orthogonal group SO(2). This has the geometric interpretation that multiplication by a unit complex number is a proper rotation in the complex plane, and every such rotation is of this form.

Every compact Lie group G of dimension > 0 has a subgroup isomorphic to the circle group. That means that, thinking in terms of symmetry, a compact symmetry group acting continuously can be expected to have one-parameter circle subgroups acting; the consequences in physical systems are seen for example at rotational invariance, and spontaneous symmetry breaking.

The circle group has many subgroups, but its only proper closed subgroups consist of roots of unity: For each integer n > 0, the nth roots of unity form a cyclic group of order n, which is unique up to isomorphism.

These representations are just the characters of the circle group. The character group of T is clearly an infinite cyclic group generated by φ1:

taking values in SO(2). Here we only have positive integers n since the representation

In this section we will forget about the topological structure of the circle group and look only at its structure as an abstract group.

The circle group T is a divisible group. Its torsion subgroup is given by the set of all nth roots of unity for all n, and is isomorphic to Q/Z. The structure theorem for divisible groups and the axiom of choice together tell us that T is isomorphic to the direct sum of Q/Z with a number of copies of Q.{{ safesubst:#invoke:Unsubst||date=__DATE__ |$B= {{#invoke:Category handler|main}}{{#invoke:Category handler|main}}[citation needed] }} The number of copies of Q must be c (the cardinality of the continuum) in order for the cardinality of the direct sum to be correct. But the direct sum of c copies of Q is isomorphic to R, as R is a vector space of dimension c over Q. Thus