Coding theory is the study of the properties of codes and their fitness for a specific application. Codes are used for data compression, cryptography, error-correction and more recently also for network coding. Codes are studied by various scientific disciplines—such as information theory, electrical engineering, mathematics, and computer science—for the purpose of designing efficient and reliable data transmission methods. This typically involves the removal of redundancy and the correction (or detection) of errors in the transmitted data.

There are essentially two aspects to coding theory:

These two aspects may be studied in combination. Source encoding attempts to compress the data from a source in order to transmit it more efficiently. This practice is found every day on the Internet where the common Zip data compression is used to reduce the network load and make files smaller. The second, channel encoding, adds extra data bits to make the transmission of data more robust to disturbances present on the transmission channel. The ordinary user may not be aware of many applications using channel coding. A typical music CD uses the Reed-Solomon code to correct for scratches and dust. In this application the transmission channel is the CD itself. Cell phones also use coding techniques to correct for the fading and noise of high frequency radio transmission. Data modems, telephone transmissions, and NASA all employ channel coding techniques to get the bits through, for example the turbo code and LDPC codes.

In 1948, Claude Shannon published "A Mathematical Theory of Communication", an article in two parts in the July and October issues of the Bell System Technical Journal. This work focuses on the problem of how best to encode the information a sender wants to transmit. In this fundamental work he used tools in probability theory, developed by Norbert Wiener, which were in their nascent stages of being applied to communication theory at that time. Shannon developed information entropy as a measure for the uncertainty in a message while essentially inventing the field of information theory.

The binary Golay code was developed in 1949. More specifically, it is an error-correcting code capable of correcting up to three errors in each 24-bit word, and detecting a fourth. 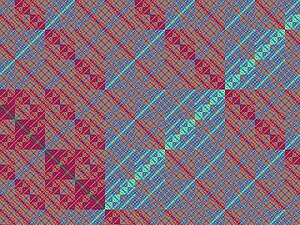 A two-dimensional visualisation
of the Hamming distance

Richard Hamming won the Turing Award in 1968 for his work at Bell Labs in numerical methods, automatic coding systems, and error-detecting and error-correcting codes. He invented the concepts known as Hamming codes, Hamming windows, Hamming numbers, and Hamming distance.

{{#invoke:main|main}} The aim of source coding is to take the source data and make it smaller.

Data can be seen as a random variable

Data are encoded by strings (words) over an alphabet

A code is a function

if the empty string is not part of the alphabet).

is the code word associated with

Length of the code word is written as

Expected length of a code is

The concatenation of code words

Entropy of a source is the measure of information. Basically, source codes try to reduce the redundancy present in the source, and represent the source with fewer bits that carry more information.

Data compression which explicitly tries to minimize the average length of messages according to a particular assumed probability model is called entropy encoding.

Facsimile transmission uses a simple run length code. Source coding removes all data superfluous to the need of the transmitter, decreasing the bandwidth required for transmission.

{{#invoke:main|main}} The purpose of channel coding theory is to find codes which transmit quickly, contain many valid code words and can correct or at least detect many errors. While not mutually exclusive, performance in these areas is a trade off. So, different codes are optimal for different applications. The needed properties of this code mainly depend on the probability of errors happening during transmission. In a typical CD, the impairment is mainly dust or scratches. Thus codes are used in an interleaved manner.{{ safesubst:#invoke:Unsubst||date=__DATE__ |$B= {{#invoke:Category handler|main}}{{#invoke:Category handler|main}}[citation needed] }} The data is spread out over the disk. Although not a very good code, a simple repeat code can serve as an understandable example. Suppose we take a block of data bits (representing sound) and send it three times. At the receiver we will examine the three repetitions bit by bit and take a majority vote. The twist on this is that we don't merely send the bits in order. We interleave them. The block of data bits is first divided into 4 smaller blocks. Then we cycle through the block and send one bit from the first, then the second, etc. This is done three times to spread the data out over the surface of the disk. In the context of the simple repeat code, this may not appear effective. However, there are more powerful codes known which are very effective at correcting the "burst" error of a scratch or a dust spot when this interleaving technique is used.

{{#invoke:main|main}} Linear block codes have the property of linearity, i.e. the sum of any two codewords is also a code word, and they are applied to the source bits in blocks, hence the name linear block codes. There are block codes that are not linear, but it is difficult to prove that a code is a good one without this property.[1]

Linear block codes are summarized by their symbol alphabets (e.g., binary or ternary) and parameters (n,m,dmin)[2] where

There are many types of linear block codes, such as

Block codes are tied to the sphere packing problem, which has received some attention over the years. In two dimensions, it is easy to visualize. Take a bunch of pennies flat on the table and push them together. The result is a hexagon pattern like a bee's nest. But block codes rely on more dimensions which cannot easily be visualized. The powerful (24,12) Golay code used in deep space communications uses 24 dimensions. If used as a binary code (which it usually is) the dimensions refer to the length of the codeword as defined above.

The theory of coding uses the N-dimensional sphere model. For example, how many pennies can be packed into a circle on a tabletop, or in 3 dimensions, how many marbles can be packed into a globe. Other considerations enter the choice of a code. For example, hexagon packing into the constraint of a rectangular box will leave empty space at the corners. As the dimensions get larger, the percentage of empty space grows smaller. But at certain dimensions, the packing uses all the space and these codes are the so-called "perfect" codes. The only nontrivial and useful perfect codes are the distance-3 Hamming codes with parameters satisfying (2r – 1, 2r – 1 – r, 3), and the [23,12,7] binary and [11,6,5] ternary Golay codes.[1][2]

The idea behind a convolutional code is to make every codeword symbol be the weighted sum of the various input message symbols. This is like convolution used in LTI systems to find the output of a system, when you know the input and impulse response.

Fundamentally, convolutional codes do not offer more protection against noise than an equivalent block code. In many cases, they generally offer greater simplicity of implementation over a block code of equal power. The encoder is usually a simple circuit which has state memory and some feedback logic, normally XOR gates. The decoder can be implemented in software or firmware.

The Viterbi algorithm is the optimum algorithm used to decode convolutional codes. There are simplifications to reduce the computational load. They rely on searching only the most likely paths. Although not optimum, they have generally been found to give good results in the lower noise environments.

Convolutional codes are used in voiceband modems (V.32, V.17, V.34) and in GSM mobile phones, as well as satellite and military communication devices.

Other applications of coding theory

Template:Misleading Another concern of coding theory is designing codes that help synchronization. A code may be designed so that a phase shift can be easily detected and corrected and that multiple signals can be sent on the same channel.{{ safesubst:#invoke:Unsubst||date=__DATE__ |$B= {{#invoke:Category handler|main}}{{#invoke:Category handler|main}}[citation needed] }}

Another general class of codes are the automatic repeat-request (ARQ) codes. In these codes the sender adds redundancy to each message for error checking, usually by adding check bits. If the check bits are not consistent with the rest of the message when it arrives, the receiver will ask the sender to retransmit the message. All but the simplest wide area network protocols use ARQ. Common protocols include SDLC (IBM), TCP (Internet), X.25 (International) and many others. There is an extensive field of research on this topic because of the problem of matching a rejected packet against a new packet. Is it a new one or is it a retransmission? Typically numbering schemes are used, as in TCP.Template:Cite web

Group testing uses codes in a different way. Consider a large group of items in which a very few are different in a particular way (e.g., defective products or infected test subjects). The idea of group testing is to determine which items are "different" by using as few tests as possible. The origin of the problem has its roots in the Second World War when the United States Army Air Forces needed to test its soldiers for syphilis. It originated from a ground-breaking paper by Robert Dorfman.

Neural coding is a neuroscience-related field concerned with how sensory and other information is represented in the brain by networks of neurons. The main goal of studying neural coding is to characterize the relationship between the stimulus and the individual or ensemble neuronal responses and the relationship among electrical activity of the neurons in the ensemble.[8] It is thought that neurons can encode both digital and analog information,[9] and that neurons follow the principles of information theory and compress information,[10] and detect and correct[11] errors in the signals that are sent throughout the brain and wider nervous system.