The rule of sum, rule of product, and inclusion-exclusion principle are often used for enumerative purposes. Bijective proofs are utilized to demonstrate that two sets have the same number of elements. The pigeonhole principle often ascertains the existence of something or is used to determine the minimum or maximum number of something in a discrete context. Many combinatorial identities arise from double counting methods or the method of distinguished element. Generating functions and recurrence relations are powerful tools that can be used to manipulate sequences, and can describe if not resolve many combinatorial situations. 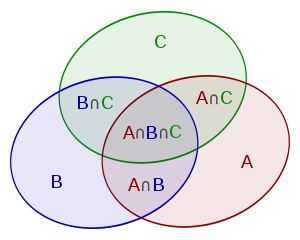 Generally, according to this principle, if A1, ..., An are finite sets, then

Bijective proofs prove that two sets have the same number of elements by finding a bijective function (one-to-one correspondence) from one set to the other.

Double counting is a technique that equates two expressions that count the size of a set in two ways.

The pigeonhole principle states that if a items are each put into one of b boxes, where a > b, then one of the boxes contains more than one item. Using this one can, for example, demonstrate the existence of some element in a set with some specific properties.

Generating functions can be thought of as polynomials with infinitely many terms whose coefficients correspond to terms of a sequence. This new representation of the sequence opens up new methods for finding identities and closed forms pertaining to certain sequences. The (ordinary) generating function of a sequence an is