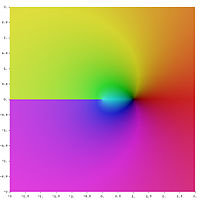 For a function to have an inverse, it must map distinct values to distinct values, i.e., be injective. But the complex exponential function is not injective, because ew+2πi = ew for any w, since adding iθ to w has the effect of rotating ew counterclockwise θ radians. Even worse, the infinitely many numbers

There are two solutions to this problem.

One is to restrict the domain of the exponential function to a region that does not contain any two numbers differing by an integer multiple of 2πi: this leads naturally to the definition of branches of log z, which are certain functions that single out one logarithm of each number in their domains. This is analogous to the definition of sin−1x on [−1,1] as the inverse of the restriction of sin θ to the interval [−π/2,π/2]: there are infinitely many real numbers θ with sin θ = x, but one (somewhat arbitrarily) chooses the one in [−π/2,π/2].

Another way to resolve the indeterminacy is to view the logarithm as a function whose domain is not a region in the complex plane, but a Riemann surface that covers the punctured complex plane in an infinite-to-1 way.

Branches have the advantage that they can be evaluated at complex numbers. On the other hand, the function on the Riemann surface is elegant in that it packages together all branches of log z and does not require any choice for its definition.

For each nonzero complex number z = x + yi, the principal value Log z is the logarithm whose imaginary part lies in the interval (−π,π]. The expression Log 0 is left undefined since there is no complex number w satisfying ew = 0.

The principal value can be described also in a few other ways.

To give a formula for Log z, begin by expressing z in polar form, z = reiθ. Given z, the polar form is not quite unique, because of the possibility of adding an integer multiple of 2π to θ, but it can be made unique by requiring θ to lie in the interval (−π,π]; this θ is called the principal value of the argument, and is sometimes written Arg z or (especially in computer languages) atan2(y,x). Then the principal value of the logarithm[1] can be defined by

, and the inverse of this restriction is

. The conformal mapping section below explains the geometric properties of this map in more detail.

When the notation log z appears without any particular logarithm having been specified, it is generally best to assume that the principal value is intended. In particular, this gives a value consistent with the real value of ln z when z is a positive real number. The capitalization in the notation Log is used by some authors[1] to distinguish the principal value from other logarithms of z.

Not all identities satisfied by ln extend to complex numbers. It is true that eLog z = z for all z ≠ 0 (this is what it means for Log z to be a logarithm of z), but the identity Log ez = z fails for z outside the strip S. For this reason, one cannot always apply Log to both sides of an identity ez = ew to deduce z = w. Also, the identity Log(z1z2) = Log z1 + Log z2 can fail: the two sides can differ by an integer multiple of 2πi : for instance,

The function Log z is discontinuous at each negative real number, but continuous everywhere else in

Branches of the complex logarithm

? Unfortunately, the answer is no. To see why, imagine tracking such a logarithm function along the unit circle, by evaluating L at eiθ as θ increases from 0 to 2π. For simplicity, suppose that the starting value L(1) is 0. Then for L(z) to be continuous, L(eiθ) must agree with iθ as θ increases (the difference is a continuous function of θ taking values in the discrete set

To obtain a continuous logarithm defined on complex numbers, it is hence necessary to restrict the domain to a smaller subset U of the complex plane. Because one of the goals is to be able to differentiate the function, it is reasonable to assume that the function is defined on a neighborhood of each point of its domain; in other words, U should be an open set. Also, it is reasonable to assume that U is connected, since otherwise the function values on different components of U could be unrelated to each other. All this motivates the following definition:

A branch of log z is a continuous function L(z) defined on a connected open subset U of the complex plane such that L(z) is a logarithm of z for each z in U.[1]

For example, the principal value defines a branch on the open set where it is continuous, which is the set

obtained by removing 0 and all negative real numbers from the complex plane.

Another example: The Mercator series

converges locally uniformly for |u| < 1, so setting z = 1+u defines a branch of log z on the open disk of radius 1 centered at 1. (Actually, this is just a restriction of Log z, as can be shown by differentiating the difference and comparing values at 1.)

Once a branch is fixed, it may be denoted "log z" if no confusion can result. Different branches can give different values for the logarithm of a particular complex number, however, so a branch must be fixed in advance (or else the principal branch must be understood) in order for "log z" to have a precise unambiguous meaning.

The argument above involving the unit circle generalizes to show that no branch of log z exists on an open set U containing a closed curve that winds around 0. To foil this argument, U is typically chosen as the complement of a ray or curve in the complex plane going from 0 (inclusive) to infinity in some direction. In this case, the curve is known as a branch cut. For example, the principal branch has a branch cut along the negative real axis.

If the function L(z) is extended to be defined at a point of the branch cut, it will necessarily be discontinuous there; at best it will be continuous "on one side", like Log z at a negative real number.

The derivative of the complex logarithm

Each branch L(z) of log z on an open set U is an inverse of a restriction of the exponential function, namely the restriction to the image of U under L. Since the exponential function is holomorphic (i.e., complex differentiable) with nonvanishing derivative, the complex analogue of the inverse function theorem applies. It shows that L(z) is holomorphic at each z in U, and L′(z) = 1/z.[1] Another way to prove this is to check the Cauchy-Riemann equations in polar coordinates.[1]

If the range of integration started at a positive number a other than 1, the formula would have to be

In developing the analogue for the complex logarithm, there is an additional complication: the definition of the complex integral requires a choice of path. Fortunately, if the integrand is holomorphic, then the value of the integral is unchanged by deforming the path (while holding the endpoints fixed), and in a simply connected region U (a region with "no holes") any path from a to z inside U can be continuously deformed inside U into any other. All this leads to the following:

If U is a simply connected open subset of

not containing 0, then a branch of log z defined on U can be constructed by choosing a starting point a in U, choosing a logarithm b of a, and defining

The complex logarithm as a conformal map 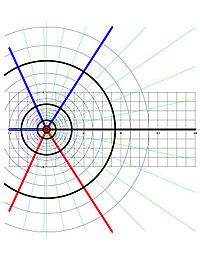 For example, the principal branch w = Log z, viewed as a mapping from

to the horizontal strip defined by |Im z| < π, has the following properties, which are direct consequences of the formula in terms of polar form:

A visualization of the Riemann surface of log z. The surface appears to spiral around a vertical line corresponding to the origin of the complex plane. The actual surface extends arbitrarily far both horizontally and vertically, but is cut off in this image.

because two branches may give different values at a point where both are defined. Compare, for example, the principal branch Log(z) on

A point on R can be thought of as a pair (z,θ) where θ is a possible value of the argument of z. In this way, R can be embedded in

The logarithm function on the Riemann surface

Because the domains of the branches were glued only along open sets where their values agreed, the branches glue to give a single well-defined function

.[6] It maps each point (z,θ) on R to ln |z| + iθ. This process of extending the original branch Log by gluing compatible holomorphic functions is known as analytic continuation.

There is a "projection map" from R down to

that "flattens" the spiral, sending (z,θ) to z. For any

, if one takes all the points (z,θ) of R lying "directly above" z and evaluates logR at all these points, one gets all the logarithms of z.

Instead of gluing only the branches chosen above, one can start with all branches of log z, and simultaneously glue every pair of branches

along the largest open subset of

on which L1 and L2 agree. This yields the same Riemann surface R and function logR as before. This approach, although slightly harder to visualize, is more natural in that it does not require selecting any particular branches.

The Riemann surface as a universal cover

realizes R as a covering space of

. In fact, it is a Galois covering with deck transformation group isomorphic to

As a complex manifold, R is biholomorphic with

via logR. (The inverse map sends z to (ez,Im z).) This shows that R is simply connected, so R is the universal cover of

Logarithms to other bases

Just as for real numbers, one can define for complex numbers a and b

the only caveat being that its value depends on the choice of a branch of log defined at a and b (with log a ≠ 0). For example, using the principal value gives

If U is a simply connected open subset of

, and f is a nowhere-vanishing holomorphic function on U, then a branch of log f defined on U can be constructed by choosing a starting point a in U, choosing a logarithm b of f(a), and defining