A conformal manifold is a differentiable manifold equipped with an equivalence class of (pseudo-)Riemannian metric tensors, in which two metrics g and h are equivalent (see also: Conformal equivalence) if and only if

Conformal geometry has a number of features which distinguish it from (pseudo-)Riemannian geometry. The first is that although in (pseudo-)Riemannian geometry one has a well-defined metric at each point, in conformal geometry one only has a class of metrics. Thus the length of a tangent vector cannot be defined, but the angle between two vectors still can. Another feature is that there is no Levi-Civita connection because if g and λ2g are two representatives of the conformal structure, then the Christoffel symbols of g and λ2g would not agree. Those associated with λ2g would involve derivatives of the function λ whereas those associated with g would not.

Despite these differences, conformal geometry is still tractable. The Levi-Civita connection and curvature tensor, although only being defined once a particular representative of the conformal structure has been singled out, do satisfy certain transformation laws involving the λ and its derivatives when a different representative is chosen. In particular, (in dimension higher than 3) the Weyl tensor turns out not to depend on λ, and so it is a conformal invariant. Moreover, even though there is no Levi-Civita connection on a conformal manifold, one can instead work with a conformal connection, which can be handled either as a type of Cartan connection modelled on the associated Möbius geometry, or as a Weyl connection. This allows one to define conformal curvature and other invariants of the conformal structure.

The conformal group for the Minkowski quadratic form q(x, y) = 2xy in the plane is the abelian Lie group:

with Lie algebra cso(1, 1) consisting of all real diagonal 2 × 2 matrices.

Consider now the Minkowski plane: R2 equipped with the metric

A 1-parameter group of conformal transformations gives rise to a vector field X with the property that the Lie derivative of g along X is proportional to g. Symbolically,

In particular, using the above description of the Lie algebra cso(1, 1), this implies that

for some real-valued functions a and b depending, respectively, on x and y. Conversely, given any such pair of real-valued functions, there exists a vector field X satisfying 1. and 2. Hence the Lie algebra of infinitesimal symmetries of the conformal structure is infinite-dimensional.

The conformal compactification of the Minkowski plane is a Cartesian product of two circles S1 × S1. On the universal cover, there is no obstruction to integrating the infinitesimal symmetries, and so the group of conformal transformations is the infinite-dimensional Lie group

The conformal group CSO(1, 1) and its Lie algebra are of current interest in conformal field theory. See also Virasoro algebra. 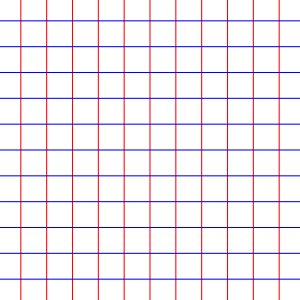 A coordinate grid prior to a Möbius transformation 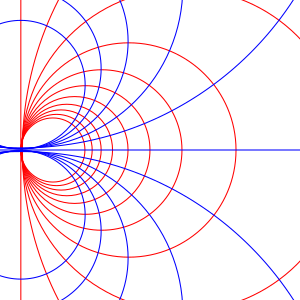 The same grid after a Möbius transformation

The group of conformal symmetries of the quadratic form

Consider the (Euclidean) complex plane equipped with the metric

where ƒ satisfies the Cauchy-Riemann equation, and so is holomorphic over its domain. (See Witt algebra.)

where ad − bc is nonzero.

In two dimensions, the group of conformal automorphisms of a space can be quite large (as in the case of Lorentzian signature) or variable (as with the case of Euclidean signature). The comparative lack of rigidity of the two-dimensional case with that of higher dimensions owes to the analytical fact that the asymptotic developments of the infinitesimal automorphisms of the structure are relatively unconstrained. In Lorentzian signature, the freedom is in a pair of real valued functions. In Euclidean, the freedom is in a single holomorphic function.

In the case of higher dimensions, the asymptotic developments of infinitesimal symmetries are at most quadratic polynomials.[1] In particular, they form a finite-dimensional Lie algebra. The pointwise infinitesimal conformal symmetries of a manifold can be integrated precisely when the manifold is a certain model conformally flat space (up to taking universal covers and discrete group quotients).[2]

The general theory of conformal geometry is similar, although with some differences, in the cases of Euclidean and pseudo-Euclidean signature.[3] In either case, there are a number of ways of introducing the model space of conformally flat geometry. Unless otherwise clear from the context, this article treats the case of Euclidean conformal geometry with the understanding that it also applies, mutatis mutandis, to the pseudo-Euclidean situation.

The inversive model of conformal geometry consists of the group of local transformations on the Euclidean space En generated by inversion in spheres. By Liouville's theorem, any angle-preserving local (conformal) transformation is of this form.[4] From this perspective, the transformation properties of flat conformal space are those of inversive geometry.

The projective model identifies the conformal sphere with a certain quadric in a projective space. Let q denote the Lorentzian quadratic form on Rn+2 defined by

In a related construction, the quadric S is thought of as the celestial sphere at infinity of the null cone in the Minkowski space Rn+1, 1, which is equipped with the quadratic form q as above. The null cone is defined by

This is the affine cone over the projective quadric S. Let N+ be the future part of the null cone (with the origin deleted). Then the tautological projection Rn+1, 1 − {0} → P(Rn+2) restricts to a projection N+ → S. This gives N+ the structure of a line bundle over S. Conformal transformations on S are induced by the orthochronous Lorentz transformations of Rn+1, 1, since these are homogeneous linear transformations preserving the future null cone.

The Euclidean unit sphere is the locus in Rn+1

This can be mapped to the Minkowski space Rn+1,1 by letting

It is readily seen that the image of the sphere under this transformation is null in the Minkowski space, and so it lies on the cone N+. Consequently, it determines a cross-section of the line bundle N+ → S.

Nevertheless, there was an arbitrary choice. In fact, if κ(x) is any positive function of x=(z, x0, ..., xn), then the assignment

also gives a mapping into N+. The function κ is an arbitrary choice of conformal scale.

A conformal representative of g is a metric of the form λ²g where λ is a positive function on the sphere. The conformal class of g, denoted [g], is the collection of all such representatives:

{{#invoke:see also|seealso}} Another way to realize the representative metrics is through a special coordinate system on Rn+1, 1. Suppose that the Euclidean n-sphere S carries a stereographic coordinate system. This consists of the following map of Rn → S ⊂ Rn+1:

In terms of these stereographic coordinates, it is possible to give a coordinate system on the null cone N+ in Minkowski space. Using the embedding given above, the representative metric section of the null cone is

Introduce a new variable t corresponding to dilations up N+, so that the null cone is coordinatized by

Finally, let ρ be the following defining function of N+:

In the t, ρ, y coordinates on Rn+1,1, the Minkowski metric takes the form:

where gij is the metric on the sphere.

In these terms, a section of the bundle N+ consists of a specification of the value of the variable t = t(yi) as a function of the yi along the null cone ρ = 0. This yields the following representative of the conformal metric on S:

Consider first the case of the flat conformal geometry in Euclidean signature. The n-dimensional model is the celestial sphere of the (n + 2)-dimensional Lorentzian space Rn+1,1. Here the model is a Klein geometry: a homogeneous space G/H where G = SO(n + 1, 1) acting on the (n+2)-dimensional Lorentzian space Rn+1,1 and H is the isotropy group of a fixed null ray in the light cone. Thus the conformally flat models are the spaces of inversive geometry. For pseudo-Euclidean of metric signature (p, q), the model flat geometry is defined analogously as the homogeneous space O(p + 1, q + 1)/H, where H is again taken as the stabilizer of a null line. Note that both the Euclidean and pseudo-Euclidean model spaces are compact.

To describe the groups and algebras involved in the flat model space, fix the following form on Rp+1,q+1: