A continuity equation in physics is an equation that describes the transport of a conserved quantity. Since mass, energy, momentum, electric charge and other natural quantities are conserved under their respective appropriate conditions, a variety of physical phenomena may be described using continuity equations.

Continuity equations are a stronger, local form of conservation laws. For example, it is true that "the total energy in the universe is conserved". But this statement does not immediately rule out the possibility that energy could disappear from Earth while simultaneously appearing in another galaxy. A stronger statement is that energy is locally conserved: Energy can neither be created nor destroyed, nor can it "teleport" from one place to another—it can only move by a continuous flow. A continuity equation is the mathematical way to express this kind of statement.

Continuity equations more generally can include "source" and "sink" terms, which allow them to describe quantities that are often but not always conserved, such as the density of a molecular species which can be created or destroyed by chemical reactions. In an everyday example, there is a continuity equation for the number of living humans; it has a "source term" to account for people being born, and a "sink term" to account for people dying.

The continuity equation is applicable when there is some quantity q which can flow or move, such as mass, energy, electric charge, momentum, number of molecules, etc. Let ρ be the volume density of this property, i.e., the amount of q per unit volume.

The way that this quantity q is flowing is described by its flux. The flux of q is a vector field, which we denote as j. Here are some examples and properties of flux:

Illustration of how the flux j of a quantity q passes through an open surface S. (dS is differential vector area).

is a surface integral.

The integral form of the continuity equation states that:

Mathematically, the integral form of the continuity equation is: 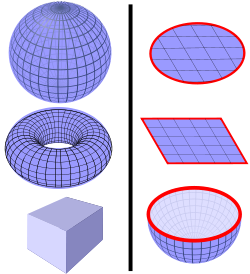 In the integral form of the continuity equation, S is any imaginary closed surface that fully encloses a volume V, like any of the surfaces on the left. S can not be a surface with boundaries, like those on the right. (Surfaces are blue, boundaries are red.)

By the divergence theorem, a general continuity equation can also be written in a "differential form":

In the case that q is a conserved quantity that cannot be created or destroyed (such as energy), σ = 0 and the equations becomes:

In electromagnetic theory, the continuity equation is an empirical law expressing (local) charge conservation. Mathematically it is an automatic consequence of Maxwell's equations, although charge conservation is more fundamental than Maxwell's equations. It states that the divergence of the current density J (in amperes per square meter) is equal to the negative rate of change of the charge density ρ (in coulombs per cubic metre),

If magnetic monopoles exist, there would be a continuity equation for monopole currents as well, see the monopole article for background and the duality between electric and magnetic currents.

The differential form of the continuity equation is:[1]

In this context, this equation is also one of Euler equations (fluid dynamics). The Navier–Stokes equations form a vector continuity equation describing the conservation of linear momentum.

which means that the divergence of velocity field is zero everywhere. Physically, this is equivalent to saying that the local volume dilation rate is zero.

Conservation of energy says that energy cannot be created or destroyed. (See below for the nuances associated general relativity.) Therefore there is a continuity equation for energy flow:

An important practical example is the flow of heat. When heat flows inside a solid, the continuity equation can be combined with Fourier's law (heat flux is proportional to temperature gradient) to arrive at the heat equation. The equation of heat flow may also have source terms: Although energy cannot be created or destroyed, heat can be created from other types of energy, for example via friction or joule heating.

Quantum mechanics is another domain where there is a continuity equation related to conservation of probability. The terms in the equation require the following definitions, and are slightly less obvious than the other examples above, so they are outlined here:

With these definitions the continuity equation reads:

Either form may be quoted. Intuitively; the above quantities indicate this represents the flow of probability. The chance of finding the particle at some position r and time t flows like a fluid; hence the term probability current, a vector field. The particle itself does not flow deterministically in this vector field.

The notation and tools of special relativity, especially 4-vectors and 4-gradients, offer a convenient way to write any continuity equation.

The density of a quantity ρ and its current j can be combined into a 4-vector called a 4-current:

where c is the speed of light. The 4-divergence of this current is:

where ∂μ is the 4-gradient and μ is an index labelling the spacetime dimension. Then the continuity equation is:

in the usual case where there are no sources or sinks, i.e. for perfectly conserved quantities like energy or charge. This continuity equation is manifestly ("obviously") Lorentz invariant.

where J is the electric 4-current; and energy-momentum conservation

where T is the stress-energy tensor.

In general relativity, where spacetime is curved, the continuity equation (in differential form) for energy, charge, or other conserved quantities involves the covariant divergence instead of the ordinary divergence.

This is an important constraint on the form the Einstein field equations take in general relativity.[4]

However, the ordinary divergence of the stress-energy tensor does not necessarily vanish:[5]

The right-hand side strictly vanishes for a flat geometry only.

As a consequence, the integral form of the continuity equation is difficult to define and not necessarily valid for a region within which spacetime is significantly curved (e.g. around a black hole, or across the whole universe).[6]

Quarks and gluons have color charge, which is always conserved like electric charge, and there is a continuity equation for such color charge currents (explicit expressions for currents are given at gluon field strength tensor).

There are many other quantities in particle physics which are often or always conserved: baryon number (proportional to the number of quarks minus the number of anti-quarks), electron number, mu number, tau number, isospin, and others.[7] Each of these has a corresponding continuity equation, possibly including source / sink terms.

If a physical field described by a function of space and time, ϕ(r, t), is varied by a small amount;

under a continuous symmetry, in which the field is a continuous variable. The field ϕ(r, t) can be a scalar field, often a scalar potential like the classical gravitational potential ζ(r, t) or electric potential ϕ(r, t), or a vector field like the Newtonian gravitational field g(r, t) or vector potentials like the magnetic potential A(r, t), or a tensor field of any order such as the electromagnetic tensor F(r, t), or even a spinor field which arise in describing particles as quantum fields. The Lagrangian density is a function of the field and its space and time derivatives: ℒ[ϕ(r, t), ∂ϕ(r, t)/∂t, ∇ϕ(r, t)].

The above considerations leads to conserved current densities in a completely general form:[8]

because they satisfy the continuity equation