The contrapositive can be compared with three other relationships between conditional statements:

"If something is not a bat, then it is not a mammal." Unlike the contrapositive, the inverse's truth value is not at all dependent on whether or not the original proposition was true, as evidenced here. The inverse here is clearly not true.

"If something is a mammal, then it is a bat." The converse is actually the contrapositive of the inverse and so always has the same truth value as the inverse, which is not necessarily the same as that of the original proposition.

is true and we are given that Q is false,

, it can logically be concluded that P must be false,

. This is often called the law of contrapositive, or the modus tollens rule of inference. 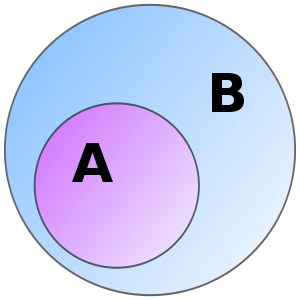 Consider the Euler diagram shown. According to this diagram, if something is in A, it must be in B as well. So we can interpret "all of A is in B" as:

It is also clear that anything that is not within B (the white region) cannot be within A, either. This statement,

is the contrapositive. Therefore we can say that

Practically speaking, this may make life much easier when trying to prove something. For example, if we want to prove that every girl in the United States (A) is blonde (B), we can either try to directly prove

by checking all girls in the United States to see if they are all blonde. Alternatively, we can try to prove

by checking all non-blonde girls to see if they are all outside the US. This means that if we find at least one non-blonde girl within the US, we will have disproved

To conclude, for any statement where A implies B, then not B always implies not A. Proving or disproving either one of these statements automatically proves or disproves the other. They are fully equivalent.

This states that, "if P, then Q", or, "if Socrates is a man, then Socrates is human." In a conditional such as this, P is the antecedent, and Q is the consequent. One statement is the contrapositive of the other only when its antecedent is the negated consequent of the other, and vice versa. The contrapositive of the example is

That is, "If not-Q, then not-P", or, more clearly, "If Q is not the case, then P is not the case." Using our example, this is rendered "If Socrates is not human, then Socrates is not a man." This statement is said to be contraposed to the original and is logically equivalent to it. Due to their logical equivalence, stating one effectively states the other; when one is true, the other is also true. Likewise with falsity.

Simple proof by definition of a conditional

In first-order logic, the conditional is defined as:

We can apply the same process the other way round:

We also know that B is either true or not true. If B is not true, then A is also not true. However, it is given that A is true; so, the assumption that B is not true leads to contradiction and must be false. Therefore, B must be true:

More rigorous proof of the equivalence of contrapositives

Logical equivalence between two propositions means that they are true together or false together. To prove that contrapositives are logically equivalent, we need to understand when material implication is true or false.

This is only false when P is true and Q is false. Therefore, we can reduce this proposition to the statement "False when P and not-Q" (i.e. "True when it is not the case that P and not-Q"):

The elements of a conjunction can be reversed with no effect (by commutativity):

, which is equal to just

This reads "It is not the case that (R is true and S is false)", which is the definition of a material conditional. We can then make this substitution:

When we swap our definitions of R and S, we arrive at the following:

Take the statement "All red objects have color." This can be equivalently expressed as "If an object is red, then it has color."

In other words, the contrapositive is logically equivalent to a given conditional statement, though not sufficient for a biconditional.

Similarly, take the statement "All quadrilaterals have four sides," or equivalently expressed "If a polygon is a quadrilateral, then it has four sides."

Since the statement and the converse are both true, it is called a biconditional, and can be expressed as "A polygon is a quadrilateral if, and only if, it has four sides." (The phrase if and only if is sometimes abbreviated iff.) That is, having four sides is both necessary to be a quadrilateral, and alone sufficient to deem it a quadrilateral.

cannot be expressed as an irreducible fraction, then it is not rational". This contrapositive, like the original statement, is also true. Therefore, if it can be proven that

cannot be expressed as an irreducible fraction, then it must be the case that

is not a rational number. The latter can be proved by contradiction.