{{#invoke:Hatnote|hatnote}}Template:Main other In mathematics, a series is the sum of the terms of a sequence of numbers.

is the sum of the first n terms of the sequence, that is,

A series is convergent if the sequence of its partial sums

converges; in other words, it approaches a given number. In more formal language, a series converges if there exists a limit

such that for any arbitrarily small positive number

, there is a large integer

Any series that is not convergent is said to be divergent.

Examples of convergent and divergent series

There are a number of methods of determining whether a series converges or diverges. 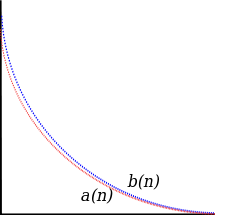 If the blue series,

, can be proven to converge, then the smaller series,

must converge. By contraposition, if the red series,

is proven to diverge, then

are compared to those of another sequence

converges, then so does

diverges, then so does

Ratio test. Assume that for all n,

. Suppose that there exists

Root test or nth root test. Suppose that the terms of the sequence in question are non-negative. Define r as follows:

where "lim sup" denotes the limit superior (possibly ∞; if the limit exists it is the same value).

The ratio test and the root test are both based on comparison with a geometric series, and as such they work in similar situations. In fact, if the ratio test works (meaning that the limit exists and is not equal to 1) then so does the root test; the converse, however, is not true. The root test is therefore more generally applicable, but as a practical matter the limit is often difficult to compute for commonly seen types of series.

Integral test. The series can be compared to an integral to establish convergence or divergence. Let

be a positive and monotone decreasing function. If

exists and is not zero, then

converges if and only if

is monotone decreasing, and has a limit of 0 at infinity, then the series converges.

is a positive monotone decreasing sequence, then

converges if and only if

File:ExpConvergence.gif
Illustration of the absolute convergence of the power series of Exp[z] around 0 evaluated at z = Exp[[[:Template:Frac]]]. The length of the line is finite.

Illustration of the conditional convergence of the power series of log(z+1) around 0 evaluated at z = exp((π−Template:Frac)i). The length of the line is infinite.

for all n. Therefore,

This means that if

also converges (but not vice versa).

converges, then the series

converges but the series

diverges, then the series

be a sequence of functions. The series

is said to converge uniformly to f if the sequence

of partial sums defined by

There is an analogue of the comparison test for infinite series of functions called the Weierstrass M-test.

The Cauchy convergence criterion states that a series

converges if and only if the sequence of partial sums is a Cauchy sequence. This means that for every

there is a positive integer

which is equivalent to