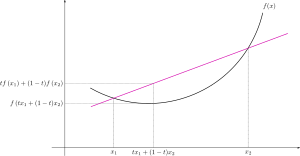 Convex function on an interval. 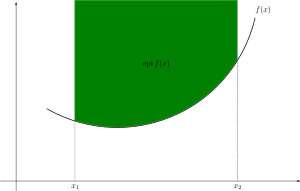 A function (in black) is convex if and only if the region above its graph (in green) is a convex set.

In mathematics, a real-valued function f(x) defined on an interval is called convex (or convex downward or concave upward) if the line segment between any two points on the graph of the function lies above the graph, in a Euclidean space (or more generally a vector space) of at least two dimensions. Equivalently, a function is convex if its epigraph (the set of points on or above the graph of the function) is a convex set. Well-known examples of convex functions are the quadratic function

and the exponential function

for any real number x.

Convex functions play an important role in many areas of mathematics. They are especially important in the study of optimization problems where they are distinguished by a number of convenient properties. For instance, a (strictly) convex function on an open set has no more than one minimum. Even in infinite-dimensional spaces, under suitable additional hypotheses, convex functions continue to satisfy such properties and, as a result, they are the most well-understood functionals in the calculus of variations. In probability theory, a convex function applied to the expected value of a random variable is always less than or equal to the expected value of the convex function of the random variable. This result, known as Jensen's inequality, underlies many important inequalities (including, for instance, the arithmetic–geometric mean inequality and Hölder's inequality).

Let X be a convex set in a real vector space and let f : X → R be a function.

Suppose Template:Mvar is a function of one real variable defined on an interval, and let

(note that R(x1, x2) is the slope of the purple line in the above drawing; note also that the function R is symmetric in x1, x2). Template:Mvar is convex if and only if R(x1, x2) is monotonically non-decreasing in x1, for x2 fixed (or vice versa). This characterization of convexity is quite useful to prove the following results.

A function is midpoint convex on an interval Template:Mvar if

A continuously differentiable function of one variable is convex on an interval if and only if the function lies above all of its tangents:[2]:69

More generally, a continuous, twice differentiable function of several variables is convex on a convex set if and only if its Hessian matrix is positive semidefinite on the interior of the convex set.

Jensen's inequality applies to every convex function f. If X is a random variable taking values in the domain of f, then E(f(X)) ≥ f(E(X)). (Here E denotes the mathematical expectation.)

Proof: Since Template:Mvar is convex, let y = 0, then:

From this we have:

The concept of strong convexity extends and parametrizes the notion of strict convexity. A strongly convex function is also strictly convex, but not vice versa.

A differentiable function Template:Mvar is called strongly convex with parameter m > 0 if the following inequality holds for all points x, y in its domain:[3]

is any norm. Some authors, such as [4] refer to functions satisfying this inequality as elliptic functions.

An equivalent condition is the following:[5]

It is not necessary for a function to be differentiable in order to be strongly convex. A third definition[5] for a strongly convex function, with parameter m, is that, for all x, y in the domain and

Notice that this definition approaches the definition for strict convexity as m → 0, and is identical to the definition of a convex function when m = 0. Despite this, functions exist that are strictly convex but are not strongly convex for any m > 0 (see example below).

for all x in the domain, where I is the identity and

is the Hessian matrix, and the inequality

is positive semi-definite. This is equivalent to requiring that the minimum eigenvalue of

be at least m for all x. If the domain is just the real line, then

is just the second derivative

, so the condition becomes

. If m = 0, then this means the Hessian is positive semidefinite (or if the domain is the real line, it means that

), which implies the function is convex, and perhaps strictly convex, but not strongly convex.

Assuming still that the function is twice continuously differentiable, one can show that the lower bound of

implies that it is strongly convex. Start by using Taylor's Theorem:

by the assumption about the eigenvalues, and hence we recover the second strong convexity equation above.

A function Template:Mvar is strongly convex with parameter m if and only if the function

The distinction between convex, strictly convex, and strongly convex can be subtle at first glimpse. If Template:Mvaris twice continuously differentiable and the domain is the real line, then we can characterize it as follows:

Template:Mvar convex if and only if

for all Template:Mvar (note: this is sufficient, but not necessary).
Template:Mvar strongly convex if and only if

For example, consider a function Template:Mvar that is strictly convex, and suppose there is a sequence of points

the function is not strongly convex because

is strongly convex. The proof of this statement follows from the extreme value theorem, which states that a continuous function on a compact set has a maximum and minimum.

A uniformly convex function,[6][7] with modulus

is a function that is increasing and vanishes only at 0. This is a generalization of the concept of strongly convex function; by taking

we recover the definition of strong convexity.