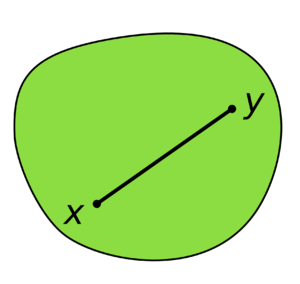 Illustration of a convex set which looks somewhat like a deformed circle. The (black) line segment joining points x and y lies completely within the (green) set. Since this is true for any points x and y within the set that we might choose, the set is convex. 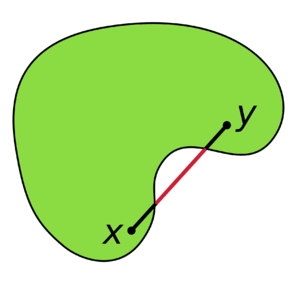 Illustration of a non-convex set which looks somewhat like a boomerang. Since the red part of the (black and red) line-segment joining the points x and y lies outside of the (green) set, the set is non-convex.

The notion of a convex set can be generalized to other spaces as described below.

A function is convex if and only if its epigraph, the region (in green) above its graph (in blue), is a convex set.

A set Template:Mvar is called absolutely convex if it is convex and balanced.

A vector of this type is known as a convex combination of u1, ..., ur.

The collection of convex subsets of a vector space has the following properties:[5][6]

Closed convex sets can be characterised as the intersections of closed half-spaces (sets of point in space that lie on and to one side of a hyperplane).

Let C be a convex body in the plane. We can inscribe a rectangle r in C such that a homothetic copy R of r is circumscribed about C. The positive homothety ratio is at most 2 and:[7]

{{#invoke:main|main}} Every subset Template:Mvar of the vector space is contained within a smallest convex set (called the convex hull of Template:Mvar), namely the intersection of all convex sets containing Template:Mvar. The convex-hull operator Conv() has the characteristic properties of a hull operator:

The intersection of any collection of convex sets is itself convex, so the convex subsets of a (real or complex) vector space form a complete lattice. 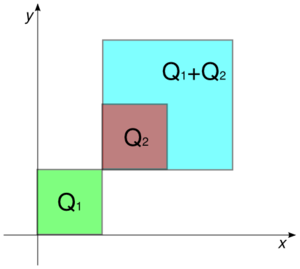 In a real vector-space, the Minkowski sum of two (non-empty) sets, S1 and S2, is defined to be the set S1 + S2 formed by the addition of vectors element-wise from the summand-sets

More generally, the Minkowski sum of a finite family of (non-empty) sets Sn is the set formed by element-wise addition of vectors

For Minkowski addition, the zero set {0} containing only the zero vector 0 has special importance: For every non-empty subset S of a vector space

in algebraic terminology, {0} is the identity element of Minkowski addition (on the collection of non-empty sets).[8]

Minkowski addition behaves well with respect to the operation of taking convex hulls, as shown by the following proposition:

This result holds more generally for each finite collection of non-empty sets:

In mathematical terminology, the operations of Minkowski summation and of forming convex hulls are commuting operations.[9][10]

Generalizations and extensions for convexity

The notion of convexity in the Euclidean space may be generalized by modifying the definition in some or other aspects. The common name "generalized convexity" is used, because the resulting objects retain certain properties of convex sets.

{{#invoke:main|main}} An example of generalized convexity is orthogonal convexity.[12]

A set Template:Mvar in the Euclidean space is called orthogonally convex or ortho-convex, if any segment parallel to any of the coordinate axes connecting two points of Template:Mvar lies totally within Template:Mvar. It is easy to prove that an intersection of any collection of orthoconvex sets is orthoconvex. Some other properties of convex sets are valid as well.

The definition of a convex set and a convex hull extends naturally to geometries which are not Euclidean by defining a geodesically convex set to be one that contains the geodesics joining any two points in the set.

Convexity can be extended for a space Template:Mvar endowed with the order topology, using the total order < of the space.[13]

The notion of convexity may be generalised to other objects, if certain properties of convexity are selected as axioms.

The elements of 𝒞 are called convex sets and the pair (X, 𝒞) is called a convexity space. For the ordinary convexity, the first two axioms hold, and the third one is trivial.

For an alternative definition of abstract convexity, more suited to discrete geometry, see the convex geometries associated with antimatroids.