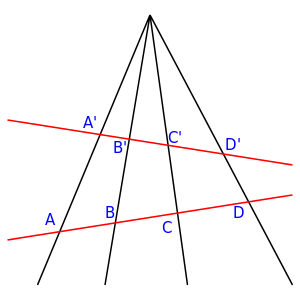 In geometry, the cross-ratio, also called double ratio and anharmonic ratio, is a number associated with a list of four collinear points, particularly points on a projective line. Given four points A, B, C and D on a line, their cross ratio is defined as

where an orientation of the line determines the sign of each distance and the distance is measured as projected into Euclidean space. (If one of the four points is the line's point at infinity, then the two distances involving that point are dropped from the formula.)

The cross-ratio is preserved by the fractional linear transformations and it is essentially the only projective invariant of a quadruple of collinear points, which underlies its importance for projective geometry. In the Cayley–Klein model of hyperbolic geometry, the distance between points is expressed in terms of a certain cross-ratio.

Cross-ratio had been defined in deep antiquity, possibly already by Euclid, and was considered by Pappus, who noted its key invariance property. It was extensively studied in the 19th century.[1] Variants of this concept exist for a quadruple of concurrent lines on the projective plane and a quadruple of points on the Riemann sphere.

The cross-ratio of a 4-tuple of distinct points on the real line with coordinates z1, z2, z3, z4 is given by

It can also be written as a "double ratio" of two division ratios of triples of points:

The same formulas can be applied to four different complex numbers or, more generally, to elements of any field and can also be extended to the case when one of them is the symbol ∞, by removing the corresponding two differences from the formula. The formula shows that cross-ratio is a function of four points, generally four numbers

taken from a field.

In geometry, if A, B, C and D are collinear points, then the cross ratio is defined similarly as

where each of the distances is signed according to a fixed orientation of the line.

Pappus of Alexandria made implicit use of concepts equivalent to the cross-ratio in his Collection: Book VII. Early users of Pappus included Isaac Newton, Michel Chasles, and Robert Simson. In 1986 Alexander Jones made a translation of the original by Pappus, then wrote a commentary on how the lemmas of Pappus relate to modern terminology.

Modern use of the cross ratio in projective geometry began with Lazare Carnot in 1803 with his book Géométrie de Position. The term used was le rapport anharmonique (Fr: anharmonic ratio). German geometers call it das Doppelverhältnis (Ger: double ratio). However, in 1847 Karl von Staudt introduced the term Throw (Wurf) to avoid the metrical implication of a ratio. His construction of the Algebra of Throws provides an approach to numerical propositions, usually taken as axioms, but proven in projective geometry.

The English term "cross-ratio" was introduced in 1878 by William Kingdon Clifford.[2]

The cross ratio of the four collinear points A, B, C, D can be written as

describes the ratio with which the point C divides the line segment AB, and

describes the ratio with which the point D divides that same line segment. The cross ratio then appears as a ratio of ratios, describing how the two points C, D are situated with respect to the line segment AB. As long as the points A, B, C and D are distinct, the cross ratio (A, B; C, D) will be a non-zero real number. We can easily deduce that

Cross-ratio is a projective invariant in the sense that it is preserved by the projective transformations of a projective line. In particular, if four points lie on a straight line L in R2 then their cross-ratio is a well-defined quantity, because any choice of the origin and even of the scale on the line will yield the same value of the cross-ratio. Furthermore, let {Li,   1 ≤ i ≤ 4}, be four distinct lines in the plane passing through the same point Q. Then any line L not passing through Q intersects these lines in four distinct points Pi (if L is parallel to Li then the corresponding intersection point is "at infinity"). It turns out that the cross-ratio of these points (taken in a fixed order) does not depend on the choice of a line L, and hence it is an invariant of the 4-tuple of lines {Li}. This can be understood as follows: if L and L′ are two lines not passing through Q then the perspective transformation from L to L′ with the center Q is a projective transformation that takes the quadruple {Pi} of points on L into the quadruple {Pi′} of points on L′. Therefore, the invariance of the cross-ratio under projective automorphisms of the line implies (in fact, is equivalent to) the independence of the cross-ratio of the four collinear points {Pi} on the lines {Li} from the choice of the line that contains them.

If four collinear points are represented in homogeneous coordinates by vectors a, b, c, d such that c = a + b and d = ka + b, then their cross-ratio is k.[3]

Arthur Cayley and Felix Klein found an application of the cross-ratio to non-Euclidean geometry. Given a nonsingular conic C in the real projective plane, its stabilizer GC in the projective group G = PGL(3,R) acts transitively on the points in the interior of C. However, there is an invariant for the action of GC on pairs of points. In fact, every such invariant is expressible as a function of the appropriate cross ratio.{{ safesubst:#invoke:Unsubst||date=__DATE__ |$B= {{#invoke:Category handler|main}}{{#invoke:Category handler|main}}[citation needed] }}

Explicitly, let the conic be the unit circle. For any two points in the unit disk, p, q, the line connecting them intersects the circle in two points, a and b. The points are, in order, a, p, q, b. Then the distance between p and q in the Cayley–Klein model of the plane hyperbolic geometry can be expressed as

(the factor one half is needed to make the curvature −1). Since the cross-ratio is invariant under projective transformations, it follows that the hyperbolic distance is invariant under the projective transformations that preserve the conic C. Conversely, the group G acts transitively on the set of pairs of points (p,q) in the unit disk at a fixed hyperbolic distance.

There is a number of definitions of the cross-ratio. However, they all differ from each other by a suitable permutation of the coordinates. In general, there are six possible different values the cross-ratio

can take depending on the order in which the points zi are given.

Using these symmetries, there can then be 6 possible values of the cross-ratio, depending on the order in which the points are given. These are:

are of order 3 in PGL(2,Z) – in fact in PSL(2,Z) (this corresponds to the subgroup A3 of even elements). Each of them fixes both values

of the "most symmetric" cross-ratio.

The anharmonic group is the group of order 6 generated by λ ↦ 1/λ and λ ↦ 1 − λ. It is abstractly isomorphic to S3 and may be realised as the six Möbius transformations mentioned,[4] which yields a projective representation of S3 over any field (since it is defined with integer entries), and is always faithful/injective (since no two terms differ only by 1/−1). Over the field with 2 elements, the projective line only has 3 points, so this representation is an isomorphism, and is the exceptional isomorphism

In characteristic 3, this stabilizes the point

which corresponds to the orbit of the harmonic cross-ratio being only a single point, since

Over the field with 3 elements, the projective line has only 4 points and

and thus the representation is exactly the stabilizer of the harmonic cross-ratio, yielding an embedding

equals the stabilizer of the point

In the language of group theory, the symmetric group S4 acts on the cross-ratio by permuting coordinates. The kernel of this action is isomorphic to the Klein four-group K. This group consists of 2-cycle permutations of type

(in addition to the identity), which preserve the cross-ratio. The effective symmetry group is then the quotient group

, which is isomorphic to S3.

For certain values of λ there will be an enhanced symmetry and therefore fewer than six possible values for the cross-ratio. These values of λ correspond to fixed points of the action of S3 on the Riemann sphere (given by the above six functions); or, equivalently, those points with a non-trivial stabilizer in this permutation group.

The first set of fixed points is {0, 1, ∞}. However, the cross-ratio can never take on these values if the points {zi} are all distinct. These values are limit values as one pair of coordinates approach each other:

The second set of fixed points is {−1, 1/2, 2}. This situation is what is classically called the Template:Visible anchor, and arises in projective harmonic conjugates. In the real case, there are no other exceptional orbits.

The most symmetric cross-ratio occurs when

. These are then the only two possible values of the cross-ratio, and these are acted on according to the sign of the permutation.

These transformations form a group acting on the Riemann sphere, the Möbius group.

The projective invariance of the cross-ratio means that

The action of the Möbius group is simply transitive on the set of triples of distinct points of the Riemann sphere: given any ordered triple of distinct points, (z2,z3,z4), there is a unique Möbius transformation f(z) that maps it to the triple (1,0,∞). This transformation can be conveniently described using the cross-ratio: since (z,z2,z3,z4) must equal (f(z),1;0,∞) which in turn equals f(z), we obtain

An alternative explanation for the invariance of the cross-ratio is based on the fact that the group of projective transformations of a line is generated by the translations, the homotheties, and the multiplicative inversion. The differences zj − zk are invariant under the translations

where a is a constant in the ground field F. Furthermore, the division ratios are invariant under a homothety

for a non-zero constant b in F. Therefore, the cross-ratio is invariant under the affine transformations.

In order to obtain a well-defined inversion mapping

the affine line needs to be augmented by the point at infinity, denoted ∞, forming the projective line P1(F). Each affine mapping f: F → F can be uniquely extended to a mapping of P1(F) into itself that fixes the point at infinity. The map T swaps 0 and ∞. The projective group is generated by T and the affine mappings extended to P1(F). In the case F = C, the complex plane, this results in the Möbius group. Since the cross-ratio is also invariant under T, it is invariant under any projective mapping of P1(F) into itself.

The theory takes on a differential calculus aspect as the four points are brought into proximity. This leads to the theory of the Schwarzian derivative, and more generally of projective connections.

Template:Rellink The cross-ratio does not generalize in a simple manner to higher dimensions, due to other geometric properties of configurations of points, notably collinearity – configuration spaces are more complicated, and distinct k-tuples of points are not in general position.

Collinearity is not the only geometric property of configurations of points that must be maintained – for example, five points determine a conic, but six general points do not lie on a conic, so whether any 6-tuple of points lies on a conic is also a projective invariant. One can study orbits of points in general position – in the line "general position" is equivalent to being distinct, while in higher dimensions it requires geometric considerations, as discussed – but, as the above indicates, this is more complicated and less informative.