{{ safesubst:#invoke:Unsubst||$N=Use dmy dates |date=__DATE__ |$B= }} The crystallographic restriction theorem in its basic form was based on the observation that the rotational symmetries of a crystal are usually limited to 2-fold, 3-fold, 4-fold, and 6-fold. However, quasicrystals can occur with other symmetries, such as 5-fold; these were not discovered until 1982, when a diffraction pattern out of a quasicrystal was first seen by the Israeli scientist Dan Shechtman, who won the 2011 Nobel Prize in Chemistry for his discovery.[1]

Crystals are modeled as discrete lattices, generated by a list of independent finite translations Template:Harv. Because discreteness requires that the spacings between lattice points have a lower bound, the group of rotational symmetries of the lattice at any point must be a finite group. The strength of the theorem is that not all finite groups are compatible with a discrete lattice; in any dimension, we will have only a finite number of compatible groups.

The special cases of 2D (wallpaper groups) and 3D (space groups) are most heavily used in applications, and we can treat them together.

A rotation symmetry in dimension 2 or 3 must move a lattice point to a succession of other lattice points in the same plane, generating a regular polygon of coplanar lattice points. We now confine our attention to the plane in which the symmetry acts Template:Harv, illustrated with lattice vectors in the figure. 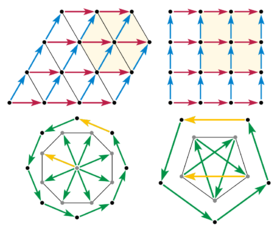 Now consider an 8-fold rotation, and the displacement vectors between adjacent points of the polygon. If a displacement exists between any two lattice points, then that same displacement is repeated everywhere in the lattice. So collect all the edge displacements to begin at a single lattice point. The edge vectors become radial vectors, and their 8-fold symmetry implies a regular octagon of lattice points around the collection point. But this is impossible, because the new octagon is about 80% as large as the original. The significance of the shrinking is that it is unlimited. The same construction can be repeated with the new octagon, and again and again until the distance between lattice points is as small as we like; thus no discrete lattice can have 8-fold symmetry. The same argument applies to any k-fold rotation, for k greater than 6.

A shrinking argument also eliminates 5-fold symmetry. Consider a regular pentagon of lattice points. If it exists, then we can take every other edge displacement and (head-to-tail) assemble a 5-point star, with the last edge returning to the starting point. The vertices of such a star are again vertices of a regular pentagon with 5-fold symmetry, but about 60% smaller than the original.

Thus the theorem is proved.

Consider two lattice points A and B separated by a translation vector r. Consider an angle α such that a rotation of angle α about any lattice point is a symmetry of the lattice. Rotating about point B by α maps point A to a new point A'. Similarly, rotating about point A by α maps B to a point B'. Since both rotations mentioned are symmetry operations, A' and B' must both be lattice points. Due to periodicity of the crystal, the new vector r' which connects them must be equal to an integer multiple of r:

and one, connecting A' and B', of length

, form a trapezium. Therefore, the length of r' is also given by:

is also an integer. Bearing in mind that

we have allowed integers

. Solving for possible values of 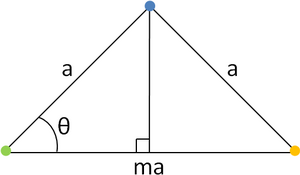 Consider a line of atoms A-O-B, separated by distance a. Rotate the entire row by θ = +2π/n and θ = −2π/n, with point O kept fixed. After the rotation by +2π/n, A is moved to the lattice point C and after the rotation by -2π/n, B is moved to the lattice point D. Due to the assumed periodicity of the lattice, the two lattice points C and D will be also in a line directly below the initial row; moreover C and D will be separated by r = ma, with m an integer. But by the geometry, the separation between these points is:

For an alternative proof, consider matrix properties. The sum of the diagonal elements of a matrix is called the trace of the matrix. In 2D and 3D every rotation is a planar rotation, and the trace is a function of the angle alone. For a 2D rotation, the trace is 2 cos θ; for a 3D rotation, 1 + 2 cos θ.

The trace is precisely 1, an integer.

Using a lattice basis, neither orthogonality nor unit length is guaranteed, only independence. However, the trace is the same with respect to any basis. (Trace is a similarity invariant.) In a lattice basis, because the rotation must map lattice points to lattice points, each matrix entry — and hence the trace — must be an integer. Thus, for example, wallpaper and crystals cannot have 8-fold rotational symmetry. The only possibilities are multiples of 60°, 90°, 120°, and 180°, corresponding to 6-, 4-, 3-, and 2-fold rotations.

The trace is still 1. The determinant (always +1 for a rotation) is also preserved.

When the dimension of the lattice rises to four or more, rotations need no longer be planar; the 2D proof is inadequate. However, restrictions still apply, though more symmetries are permissible. For example, the hypercubic lattice has an eightfold rotational symmetry, corresponding to an eightfold rotational symmetry of the hypercube. This is of interest, not just for mathematics, but for the physics of quasicrystals under the cut-and-project theory. In this view, a 3D quasicrystal with 8-fold rotation symmetry might be described as the projection of a slab cut from a 4D lattice.

The following 4D rotation matrix is the aforementioned eightfold symmetry of the hypercube (and the cross-polytope):

Transforming this matrix to the new coordinates given by

The A4 lattice and F4 lattice have order 10 and order 12 rotational symmetries, respectively.

To state the restriction for all dimensions, it is convenient to shift attention away from rotations alone and concentrate on the integer matrices Template:Harv. We say that a matrix A has order k when its k-th power (but no lower), Ak, equals the identity. Thus a 6-fold rotation matrix in the equilateral triangle basis is an integer matrix with order 6. Let OrdN denote the set of integers that can be the order of an N×N integer matrix. For example, Ord2 = {1, 2, 3, 4, 6}. We wish to state an explicit formula for OrdN.

The crystallographic restriction in general form states that OrdN consists of those positive integers m such that ψ(m) ≤ N.

Note that these additional symmetries do not allow a planar slice to have, say, 8-fold rotation symmetry. In the plane, the 2D restrictions still apply. Thus the cuts used to model quasicrystals necessarily have thickness.

Integer matrices are not limited to rotations; for example, a reflection is also a symmetry of order 2. But by insisting on determinant +1, we can restrict the matrices to proper rotations.

The crystallographic restriction theorem can be formulated in terms of isometries of Euclidean space. A set of isometries can form a group. By a discrete isometry group we will mean an isometry group that maps every point to a discrete subset of RN, i.e. a set of isolated points. With this terminology, the crystallographic restriction theorem in two and three dimensions can be formulated as follows.

For every discrete isometry group in two- and three-dimensional space which includes translations spanning the whole space, all isometries of finite order are of order 1, 2, 3, 4 or 6.

Note that isometries of order n include, but are not restricted to, n-fold rotations. The theorem also excludes S8, S12, D4d, and D6d (see point groups in three dimensions), even though they have 4- and 6-fold rotational symmetry only.

The result in the table above implies that for every discrete isometry group in four- and five-dimensional space which includes translations spanning the whole space, all isometries of finite order are of order 1, 2, 3, 4, 5, 6, 8, 10, or 12.