Template:More footnotes Template:Semireg polyhedron stat table In geometry, a cuboctahedron is a polyhedron with eight triangular faces and six square faces. A cuboctahedron has 12 identical vertices, with two triangles and two squares meeting at each, and 24 identical edges, each separating a triangle from a square. As such it is a quasiregular polyhedron, i.e. an Archimedean solid, being vertex-transitive and edge-transitive.

Its dual polyhedron is the rhombic dodecahedron.

The area A and the volume V of the cuboctahedron of edge length a are:

The cuboctahedron has four special orthogonal projections, centered on a vertex, an edge, and the two types of faces, triangular and square. The last two correspond to the B2 and A2 Coxeter planes. The skew projections show a square and hexagon passing through the center of the cuboctahedron.

The cuboctahedron can also be represented as a spherical tiling, and projected onto the plane via a stereographic projection. This projection is conformal, preserving angles but not areas or lengths. Straight lines on the sphere are projected as circular arcs on the plane.

The Cartesian coordinates for the vertices of a cuboctahedron (of edge length √2) centered at the origin are:

An alternate set of coordinates can be made in 4-space, as 12 permutations of:

This construction exists as one of 16 orthant facets of the cantellated 16-cell.

The cuboctahedron can also be dissected into 6 square pyramids, and 8 tetrahedra meeting at a central point. This dissection is expressed in the alternated cubic honeycomb where pairs of square pyramids are combined into octahedra. 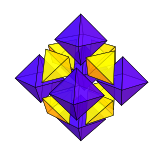 A cuboctahedron can be obtained by taking an appropriate cross section of a four-dimensional 16-cell.

A cuboctahedron has octahedral symmetry. Its first stellation is the compound of a cube and its dual octahedron, with the vertices of the cuboctahedron located at the midpoints of the edges of either.

It is also a cantellated tetrahedron. With this construction it is given the Wythoff symbol: 3 3 | 2.

A skew cantellation of the tetrahedron produces a solid with faces parallel to those of the cuboctahedron, namely eight triangles of two sizes, and six rectangles. While its edges are unequal, this solid remains vertex-uniform: the solid has the full tetrahedral symmetry group and its vertices are equivalent under that group.

Both triangular bicupolae are important in sphere packing. The distance from the solid's center to its vertices is equal to its edge length. Each central sphere can have up to twelve neighbors, and in a face-centered cubic lattice these take the positions of a cuboctahedron's vertices. In a hexagonal close-packed lattice they correspond to the corners of the triangular orthobicupola. In both cases the central sphere takes the position of the solid's center.

The cuboctahedron is one of a family of uniform polyhedra related to the cube and regular octahedron.

The cuboctahedron can be seen in a sequence of quasiregular polyhedrons and tilings: Template:Quasiregular figure table

This polyhedron is topologically related as a part of sequence of cantellated polyhedra with vertex figure (3.4.n.4), and continues as tilings of the hyperbolic plane. These vertex-transitive figures have (*n32) reflectional symmetry. 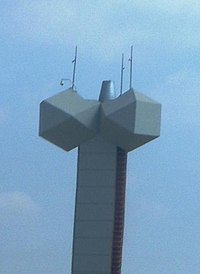 Two cuboctahedra on a chimney. Israel.

Template:Infobox graph In the mathematical field of graph theory, a cuboctahedral graph is the graph of vertices and edges of the cuboctahedron, one of the Archimedean solids. It has 12 vertices and 24 edges, and is a quartic graph Archimedean graph.[3]