In mathematics, specifically in algebraic topology, the cup product is a method of adjoining two cocycles of degree p and q to form a composite cocycle of degree p + q. This defines an associative (and distributive) graded commutative product operation in cohomology, turning the cohomology of a space X into a graded ring, H∗(X), called the cohomology ring. The cup product was introduced in work of J. W. Alexander, Eduard Čech and Hassler Whitney from 1935–1938, and, in full generality, by Samuel Eilenberg in 1944.

In singular cohomology, the cup product is a construction giving a product on the graded cohomology ring H∗(X) of a topological space X.

The construction starts with a product of cochains: if cp is a p-cochain and dq is a q-cochain, then

-simplex whose vertices are indexed by

is the p-th front face and

is the q-th back face of σ, respectively.

The cup product operation in cohomology satisfies the identity

so that the corresponding multiplication is graded-commutative.

The cup product is functorial, in the following sense: if

is a continuous function, and

is the induced homomorphism in cohomology, then

It is possible to view the cup product

as induced from the following composition:

, where the first map is the Künneth map and the second is the map induced by the diagonal

This composition passes to the quotient to give a well-defined map in terms of cohomology, this is the cup product. This approach explains the existence of a cup product for cohomology but not for homology:

but would also induce a map

, which goes the wrong way round to allow us to define a product. This is however of use in defining the cap product.

Bilinearity follows from this presentation of cup product, i.e.

Cup products may be used to distinguish manifolds from wedges of spaces with identical cohomology groups. The space

has the same cohomology groups as the torus T, but with a different cup product. In the case of X the multiplication of the cochains associated to the copies of

is degenerate, whereas in T multiplication in the first cohomology group can be used to decompose the torus as a 2-cell diagram, thus having product equal to Z (more generally M where this is the base module). 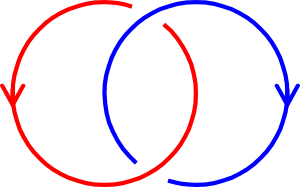 Similarly, the linking number can be defined in terms of intersections, shifting dimensions by 1, or alternatively in terms of a non-vanishing cup product on the complement of a link. 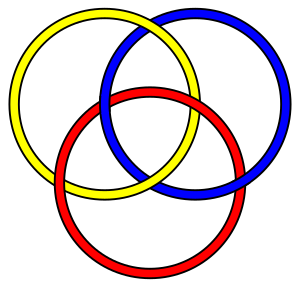 {{#invoke:main|main}} The cup product is a binary (2-ary) operation; one can define a ternary (3-ary) and higher order operation called the Massey product, which generalizes the cup product. This is a higher order cohomology operation, which is only partly defined (only defined for some triples).