In propositional logic and boolean algebra, De Morgan's laws[1][2][3] are a pair of transformation rules that are both valid rules of inference. The rules allow the expression of conjunctions and disjunctions purely in terms of each other via negation.

The rules can be expressed in English as:

The rules can be expressed in formal language with two propositions P and Q as:

Applications of the rules include simplification of logical expressions in computer programs and digital circuit designs. De Morgan's laws are an example of a more general concept of mathematical duality.

The negation of conjunction rule may be written in sequent notation:

The negation of disjunction rule may be written as:

In rule form: negation of conjunction

and negation of disjunction

and expressed as a truth-functional tautology or theorem of propositional logic:

are propositions expressed in some formal system.

De Morgan's laws are normally shown in the compact form above, with negation of the output on the left and negation of the inputs on the right. A clearer form for substitution can be stated as:

This emphasizes the need to invert both the inputs and the output, as well as change the operator, when doing a substitution.

In set theory and Boolean algebra, it is often stated as "union and intersection interchange under complementation",[4] which can be formally expressed as:

The generalized form is:

where I is some, possibly uncountable, indexing set.

In set notation, De Morgan's laws can be remembered using the mnemonic "break the line, change the sign".[5]

In electrical and computer engineering, De Morgan's laws are commonly written as:

Search A: NOT (cars OR trucks)
Search B: (NOT cars) AND (NOT trucks)

The corpus of documents containing “cars” or “trucks” can be represented by four documents:

To evaluate Search A, clearly the search “(cars OR trucks)” will hit on Documents 1, 2, and 3. So the negation of that search (which is Search A) will hit everything else, which is Document 4.

A similar evaluation can be applied to show that the following two searches will return the same set of documents (Documents 1, 2, 4):

Search C: NOT (cars AND trucks)
Search D: (NOT cars) OR (NOT trucks)

The laws are named after Augustus De Morgan (1806–1871),[6] who introduced a formal version of the laws to classical propositional logic. De Morgan's formulation was influenced by algebraization of logic undertaken by George Boole, which later cemented De Morgan's claim to the find. Nevertheless, a similar observation was made by Aristotle, and was known to Greek and Medieval logicians.[7] For example, in the 14th century, William of Ockham wrote down the words that would result by reading the laws out.[8] Jean Buridan, in his Summulae de Dialectica, also describes rules of conversion that follow the lines of De Morgan's laws.[9] Still, De Morgan is given credit for stating the laws in the terms of modern formal logic, and incorporating them into the language of logic. De Morgan's laws can be proved easily, and may even seem trivial.[10] Nonetheless, these laws are helpful in making valid inferences in proofs and deductive arguments.

Negation of a disjunction

In the case of its application to a disjunction, consider the following claim: "it is false that either of A or B is true", which is written as:

In that it has been established that neither A nor B is true, then it must follow that both A is not true and B is not true, which may be written directly as:

If either A or B were true, then the disjunction of A and B would be true, making its negation false. Presented in English, this follows the logic that "since two things are both false, it is also false that either of them is true".

Working in the opposite direction, the second expression asserts that A is false and B is false (or equivalently that "not A" and "not B" are true). Knowing this, a disjunction of A and B must be false also. The negation of said disjunction must thus be true, and the result is identical to the first claim.

Negation of a conjunction

The application of De Morgan's theorem to a conjunction is very similar to its application to a disjunction both in form and rationale. Consider the following claim: "it is false that A and B are both true", which is written as:

In order for this claim to be true, either or both of A or B must be false, for if they both were true, then the conjunction of A and B would be true, making its negation false. Thus, one (at least) or more of A and B must be false (or equivalently, one or more of "not A" and "not B" must be true). This may be written directly as:

Presented in English, this follows the logic that "since it is false that two things are both true, at least one of them must be false".

is done by first proving that

, and then by proving that

. Because this is true for any arbitrary

To prove the reverse direction, assume that

, in contradiction to the hypothesis that

The other De Morgan's law, that 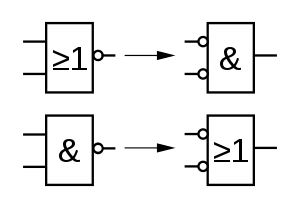 De Morgan's Laws represented as a circuit with logic gates

In extensions of classical propositional logic, the duality still holds (that is, to any logical operator one can always find its dual), since in the presence of the identities governing negation, one may always introduce an operator that is the De Morgan dual of another. This leads to an important property of logics based on classical logic, namely the existence of negation normal forms: any formula is equivalent to another formula where negations only occur applied to the non-logical atoms of the formula. The existence of negation normal forms drives many applications, for example in digital circuit design, where it is used to manipulate the types of logic gates, and in formal logic, where it is a prerequisite for finding the conjunctive normal form and disjunctive normal form of a formula. Computer programmers use them to simplify or properly negate complicated logical conditions. They are also often useful in computations in elementary probability theory.

Let one define the dual of any propositional operator P(p, q, ...) depending on elementary propositions p, q, ... to be the operator

To relate these quantifier dualities to the De Morgan laws, set up a model with some small number of elements in its domain D, such as

verifying the quantifier dualities in the model.

Then, the quantifier dualities can be extended further to modal logic, relating the box ("necessarily") and diamond ("possibly") operators:

In its application to the alethic modalities of possibility and necessity, Aristotle observed this case, and in the case of normal modal logic, the relationship of these modal operators to the quantification can be understood by setting up models using Kripke semantics.