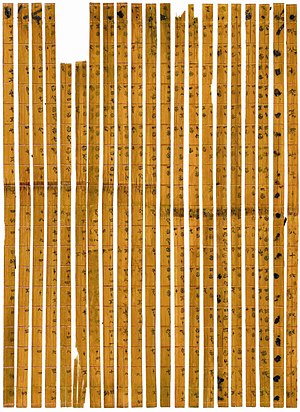 The world's earliest decimal multiplication table was made from bamboo slips, dating from 305 BC, during the Warring States period in China.

This article aims to be an accessible introduction. For the mathematical definition, see Decimal representation.

The decimal numeral system (also called base ten or occasionally denary) has ten as its base. It is the numerical base most widely used by modern civilizations.[1][2]

Decimal notation often refers to a base-10 positional notation such as the Hindu-Arabic numeral system or rod calculus;[3] however, it can also be used more generally to refer to non-positional systems such as Roman or Chinese numerals which are also based on powers of ten.

Decimals also refer to decimal fractions, either separately or in contrast to vulgar fractions. In this context, a decimal is a tenth part, and decimals become a series of nested tenths. There was a notation in use like "tenth-metre", meaning the tenth decimal of the metre, currently an Angstrom. The contrast here is between decimals and vulgar fractions, and decimal divisions and other divisions of measures, like the inch. It is possible to follow a decimal expansion with a vulgar fraction; this is done with the recent divisions of the troy ounce, which has three places of decimals, followed by a trinary place.

However, when people who use Hindu-Arabic numerals speak of decimal notation, they often mean not just decimal numeration, as above, but also decimal fractions, all conveyed as part of a positional system. Positional decimal systems include a zero and use symbols (called digits) for the ten values (0, 1, 2, 3, 4, 5, 6, 7, 8, and 9) to represent any number, no matter how large or how small. These digits are often used with a decimal separator which indicates the start of a fractional part, and with a symbol such as the plus sign + (for positive) or minus sign − (for negative) adjacent to the numeral to indicate whether it is greater or less than zero, respectively.

Positional notation uses positions for each power of ten: units, tens, hundreds, thousands, etc. The position of each digit within a number denotes the multiplier (power of ten) multiplied with that digit—each position has a value ten times that of the position to its right. There were at least two presumably independent sources of positional decimal systems in ancient civilization: the Chinese counting rod system and the Hindu-Arabic numeral system (the latter descended from Brahmi numerals).

Ten fingers on two hands, the possible starting point of the decimal counting.

Ten is the number which is the count of fingers and thumbs on both hands (or toes on the feet). The English word digit as well as its translation in many languages is also the anatomical term for fingers and toes. In English, decimal (decimus < Lat.) means tenth, decimate means reduce by a tenth, and denary (denarius < Lat.) means the unit of ten.

The symbols for the digits in common use around the globe today are called Arabic numerals by Europeans and Indian numerals by Arabs, the two groups' terms both referring to the culture from which they learned the system. However, the symbols used in different areas are not identical; for instance, Western Arabic numerals (from which the European numerals are derived) differ from the forms used by other Arab cultures.

A decimal fraction is a fraction the denominator of which is a power of ten.[4]

Decimal fractions are commonly expressed without a denominator, the decimal separator being inserted into the numerator (with leading zeros added if needed) at the position from the right corresponding to the power of ten of the denominator; e.g., 8/10, 83/100, 83/1000, and 8/10000 are expressed as 0.8, 0.83, 0.083, and 0.0008. In English-speaking, some Latin American and many Asian countries, a period (.) or raised period (·) is used as the decimal separator; in many other countries, particularly in Europe, a comma (,) is used.

The integer part, or integral part of a decimal number is the part to the left of the decimal separator. (See also truncation.) The part from the decimal separator to the right is the fractional part. It is usual for a decimal number that consists only of a fractional part (mathematically, a proper fraction) to have a leading zero in its notation (its numeral). This helps disambiguation between a decimal sign and other punctuation, and especially when the negative number sign is indicated, it helps visualize the sign of the numeral as a whole.

Any rational number with a denominator whose only prime factors are 2 and/or 5 may be precisely expressed as a decimal fraction and has a finite decimal expansion.[5]

If the rational number's denominator has any prime factors other than 2 or 5, it cannot be expressed as a finite decimal fraction,[5] and has a unique eventually repeating infinite decimal expansion.

That a rational number must have a finite or recurring decimal expansion can be seen to be a consequence of the long division algorithm, in that there are at most q-1 possible nonzero remainders on division by q, so that the recurring pattern will have a period less than q. For instance, to find 3/7 by long division:

Every real number has a (possibly infinite) decimal representation; i.e., it can be written as

Such a sum converges as more and more negative values of i are included, even if there are infinitely many non-zero ai.

Rational numbers (e.g., p/q) with prime factors in the denominator other than 2 and 5 (when reduced to simplest terms) have a unique recurring decimal representation.

The same trichotomy holds for other base-n positional numeral systems:

A version of this even holds for irrational-base numeration systems, such as golden mean base representation.

Diagram of the world's earliest decimal multiplication table (Template:Circa 305 BC) from the Warring States period

Decimal computation was carried out in ancient times in many ways, typically in rod calculus, with decimal multiplication table used in ancient China and with sand tables in India and Middle East or with a variety of abaci.

For most purposes, however, binary values are converted to or from the equivalent decimal values for presentation to or input from humans; computer programs express literals in decimal by default. (123.1, for example, is written as such in a computer program, even though many computer languages are unable to encode that number precisely.)

Both computer hardware and software also use internal representations which are effectively decimal for storing decimal values and doing arithmetic. Often this arithmetic is done on data which are encoded using some variant of binary-coded decimal,[7] especially in database implementations, but there are other decimal representations in use (such as in the new IEEE 754 Standard for Floating-Point Arithmetic).[8]

Decimal arithmetic is used in computers so that decimal fractional results can be computed exactly, which is not possible using a binary fractional representation. This is often important for financial and other calculations.[9]

Many ancient cultures calculated from early on with numerals based on ten: Egyptian hieroglyphs, in evidence since around 3000 BC, used a purely decimal system,[10][11] just as the Cretan hieroglyphs (ca. 1625−1500 BC) of the Minoans whose numerals are closely based on the Egyptian model.[12][13] The decimal system was handed down to the consecutive Bronze Age cultures of Greece, including Linear A (ca. 18th century BC−1450 BC) and Linear B (ca. 1375−1200 BC) — the number system of classical Greece also used powers of ten, including, like the Roman numerals did, an intermediate base of 5.[14] Notably, the polymath Archimedes (c. 287–212 BC) invented a decimal positional system in his Sand Reckoner which was based on 108[14] and later led the German mathematician Carl Friedrich Gauss to lament what heights science would have already reached in his days if Archimedes had fully realized the potential of his ingenious discovery.[15] The Hittites hieroglyphs (since 15th century BC), just like the Egyptian and early numerals in Greece, was strictly decimal.[16]

Qin Jiushao in his book Mathematical Treatise in Nine Sections (1247) denoted 0.96644 by

The Jewish mathematician Immanuel Bonfils invented decimal fractions around 1350, anticipating Simon Stevin, but did not develop any notation to represent them.[21]

The Persian mathematician Jamshīd al-Kāshī claimed to have discovered decimal fractions himself in the 15th century, though J. Lennart Berggren notes that positional decimal fractions were used five centuries before him by Arab mathematician Abu'l-Hasan al-Uqlidisi as early as the 10th century.[22]Al Khwarizmi introduced fraction to Islamic countries in the early 9th century, his fraction presentation was an exact copy of traditional Chinese mathematical fraction. This form of fraction with numerator on top and denominator at bottom without a horizontal bar was also used by 10th century Abu'l-Hasan al-Uqlidisi and 15th century Jamshīd al-Kāshī's work "Arithmetic Key".[18][23]

A forerunner of modern European decimal notation was introduced by Simon Stevin in the 16th century.[24]

Telugu language uses a straightforward decimal system. Other Dravidian languages such as Tamil and Malayalam have replaced the number nine tondu with 'onpattu' ("one to ten") during the early Middle Ages, while Telugu preserved the number nine as tommidi.

The Hungarian language also uses a straightforward decimal system. All numbers between 10 and 20 are formed regularly (e.g. 11 is expressed as "tízenegy" literally "one on ten"), as with those between 20-100 (23 as "huszonhárom" = "three on twenty").

A straightforward decimal rank system with a word for each order 10十,100百,1000千,10000万, and in which 11 is expressed as ten-one and 23 as two-ten-three, and 89345 is expressed as 8 (ten thousands) 万9 (thousand) 千3 (hundred) 百4 (tens) 十 5 is found in Chinese languages, and in Vietnamese with a few irregularities. Japanese, Korean, and Thai have imported the Chinese decimal system. Many other languages with a decimal system have special words for the numbers between 10 and 20, and decades. For example in English 11 is "eleven" not "ten-one".

Incan languages such as Quechua and Aymara have an almost straightforward decimal system, in which 11 is expressed as ten with one and 23 as two-ten with three.

Some psychologists suggest irregularities of the English names of numerals may hinder children's counting ability.[25]

Some cultures do, or did, use other bases of numbers.